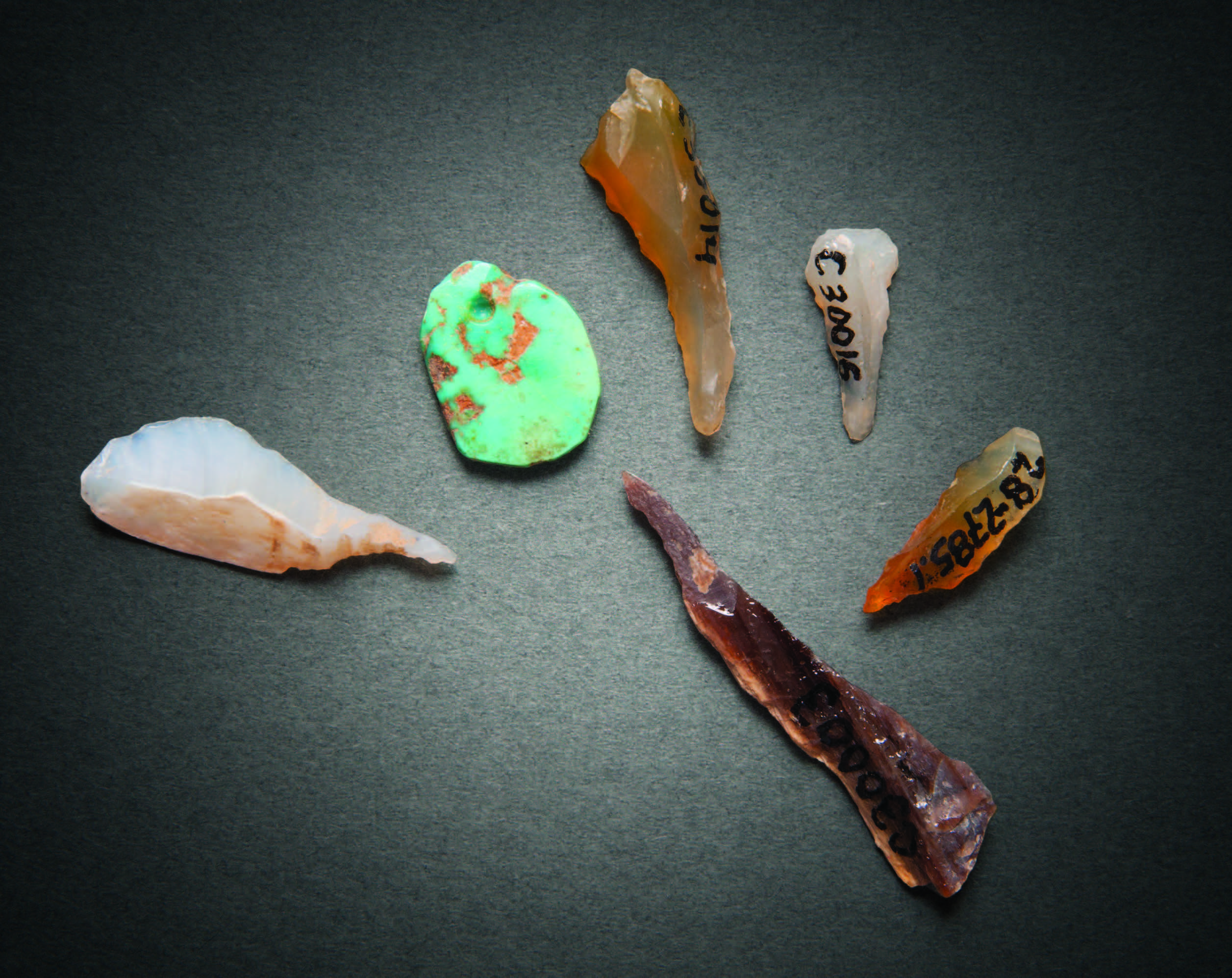 Jewelry making in the Southwest has a long history, and the Ancestral Pueblo people left behind elegant necklaces of black, white, red, and turquoise beads, as well as pendants and inlaid objects. Some of the most spectacular items were found in Chaco Canyon, New Mexico, in the site named Pueblo Bonito, a great house excavated by George Pepper in the late 1890s and Neil Judd during the 1920s.

The thousands of beads, pendants, and mosaic pieces called tesserae recovered from this site suggest many hours of labor. A number of skilled lapidaries probably were involved in this task between AD 900 and 1130. Pepper and Judd both found a few tools and some broken, unfinished jewelry pieces that demonstrate how jewelry was made, but neither described a jewelry workshop.

Tools Used for Jewelry MakingJudd was fortunate to employ at least one Zuni lapidary on his excavation crew who identified sandstone abraders, saws, and files that were similar to tools he used, and he commented on how they functioned. Yet it was the turquoise objects themselves that provided the best evidence of how jewelry was manufactured. These were not necessarily finished items, but small scraps or debris that came off a piece while the lapidary cut and shaped a rough form from raw specimens, rounded off the edges, or drilled a perforation for stringing beads and pendants. Judd also found pieces that broke while the object was being formed or polished.

Disk-shaped pieces without perforations are evidence of one step in manufacturing a bead, and beads and pendants broken while a perforation was being drilled indicate that the jewelry makers were not always successful in completing their tasks. Although stone tools were used to drill biconical holes in beads and pendants, some of the very smallest beads at Pueblo Bonito were only 1.8 mm in diameter, with perforations of only 0.75 mm. These stone drills recovered from Pueblo Bonito were too large to make such a small hole. Experiments conducted by Emil Haury using a barrel-cactus spine as a drill suggested to Judd that some type of cactus spine might have provided a needle-sized point to drill the cylindrical holes in these tiny objects.

Based on Judd’s report, archaeologists had a good idea of what types of artifacts would comprise a jewelry work location, but it was not until the 1970s, when the National Park Service excavated a number of sites in Chaco Canyon, that a more detailed picture of turquoise-jewelry production emerged. In addition to jewelry-making debris, abraders and files and drills made of chalcedonic silicified wood from a number of sites suggest where someone was making jewelry.

A Jewelry Workshop SiteAlthough several workshop areas have now been identified, the best description of jewelry making comes from a small site that was part of the Fajada Gap Community, an area that has been subdivided into several smaller locales. In 1975 and 1976, excavation at the Spadefoot Toad Site (also recorded as 29SJ 629 and LA 40629) revealed that sometime around AD 875 – 925 probably two families constructed and lived in a pithouse and used several aboveground storage rooms and a ramada-shaded plaza for their daily activities. By the late AD 900s, the pithouse was undergoing change from a residential structure to a kiva. At this time, the inhabitants constructed four additional aboveground rooms for habitation and storage and a second pithouse that would accommodate some kiva-related functions. These newer structures, plus the original pithouse and storage rooms, continued to be used until approximately AD 1030 to 1050. Around AD 1100, another kiva was placed almost directly above the initial pithouse. Thomas Windes, who was responsible for the excavation of this site, considered the possibility that this late kiva was part of the occupation of a neighboring site, rather than a continuation of the earlier settlement at the Spadefoot Toad Site.

The inhabitants of the Spadefoot Toad Site probably were farmers who, in addition to processing food, made turquoise jewelry. Besides turquoise and abraders similar to the ones described by Judd, a number of drills made from chalcedonic silicified wood were found. Windes also suggested that burned selenite could have been used as an abrasive because it was usually found near the turquoise, drills, and abraders that indicated jewelry-making locations. Material found in three areas of the site dating around AD 975 to 1030 attest to this interpretation: Pithouse 2; the roofs of Storage Rooms 5, 6, and 7; and the plaza between these structures.

Pithouse 2 had two floors. No artifacts were recovered from the lowest floor, but two heating pits associated with that floor, one sealed and one unsealed, had turquoise flecks in the fill. The presence of the flecks in a sealed pit suggests that someone probably had been making turquoise jewelry there during the early use of this structure. Evidence from the upper floor, however, was much more extensive. Windes thought that the inhabitants laid down a clean, sandy layer in the northeast quadrant to cushion and protect the floor. Among the artifacts found on the floor and in the sandy layer were a lapidary file, a possible lapidary abrader, a turquoise pendant blank, large and small turquoise debris, and burned selenite sitting in a broken bowl fragment. Other stone tools not indicative of food processing suggest that the person using this area was not part of those activities.

Three typical storage rooms were associated with Pithouse 2. Excavated into the ground, Rooms 5, 6, and 7 were tub-shaped below floor level; the lack of doors in all but one (in the wall of Room 7) suggested entryways through the roof. Although Room 7 had little evidence of activity other than storage, Room 5 and Room 6 revealed some traces of jewelry production. On the floor of Room 5 were two abraders and a fragment of a shell ring. Fill above the floor that was interpreted as roof fall contained additional bits of turquoise, small drills made of chalcedonic silicified wood, two small abraders, and some pieces of ground calcite. Five grooved abraders were recovered in Room 6, and a small piece of turquoise, a drill, and a projectile point suggested that jewelry production might have taken place on the roof. The roofs of these storage rooms would have been an excellent place to work during the cooler days of spring and fall.

The plaza in front of the storage rooms was covered by a ramada that provided shade and functioned as a summer workspace. In front of the storage rooms, the plaza floor contained five large bell-shaped pits, three of which were thought to be associated with the tub-shaped storage rooms. Two of these, both of which had been plugged with construction debris and adobe prior to AD 1030, contained some jewelry-making tools and debris. Other Pit 1, directly in front of Room 6, was initially used as a storage pit before it was intentionally filled with some unusual remains. In two layers above the pit floor were bones from four turkey skeletons, an arm of a young adult human male, and a small wooden cylinder with green paint or flecks of turquoise on one end. Above these, in Layer 3, was evidence of debris from turquoise jewelry making. Besides 50 – 100 broken beads, several pieces of tesserae, and a few pendants, the fill contained an estimated 500,000 turquoise microchips. Tools thought to have been used to create the turquoise jewelry — three tiny drills and numerous flakes of chalcedonic silicified wood, as well as a third of the site’s lapidary abraders — were also present. Ceramics in the fill suggest the pit was sealed sometime in the early AD 1000s.

The second bell-shaped pit, Other Pit 6, in front of Room 7, was probably closed at the same time. Here fragments of unworked selenite, some turquoise, and a chalcedonic silicified wood chip could also be related to jewelry manufacture. A third bell-shaped pit with evidence of jewelry making, Other Pit 14, was in front of Room 7. Artifacts recovered here included 10 pieces of turquoise, 5 bracelet fragments made of Glycymeris shell, and 264 pieces of unworked selenite. Yet other artifacts, hammerstones and other types of stone tools, were thought to be associated with food processing, another plaza activity. Although there were other large pits in the plaza area, these three were similar in size and function. The plaza surface also had evidence of jewelry production: microdrills, turquoise debris, and broken turquoise beads.

Interpreting the SiteThe evidence from this site provides a glimpse of how jewelry was produced during an approximately fifty-year period and suggests who might have made it. One interpretation is that one family (or possibly an extended family) of farmers living in a small house in this section of the Fajada Gap Community spent considerable time and effort making jewelry. When the family (or possibly two families) first constructed the site, they lived in Pithouse 2 and stored their foodstuffs on a long-term basis in three tub-shaped rooms and their short-term foods in three bell-shaped pits in the plaza. On warm winter days they might have sat on top of the rooms while they cut, ground, and polished turquoise jewelry pieces. In summer, spare time would have been spent under the ramada on the plaza preparing food and making jewelry. With time, Pithouse 2 took on a more kiva-like appearance, and the family may have increased in size and moved into additional aboveground rooms. A second pithouse may have been used to absorb additional kiva activities. We do not know if one person or several people were employed in the manufacture of turquoise; we do know that around AD 1000, the family had cleaned off their workspaces and placed most of their tools and turquoise debris in the bell-shaped storage pits in the plaza. By AD 1030 they had left the rooms and pithouses at the site to deteriorate and collapse.

Were there full-time craft specialists at the Spadefoot Toad Site? Abundant evidence of food processing and storage suggests the occupants were as involved with these duties as they were with jewelry production. How could they have created something as labor intensive as the necklace found at Pueblo Bonito if most of their time was split between jewelry making and daily tasks? It took Haury fifteen minutes to drill a hole in a fine-grained pelitic rock that was 1.47 mm thick. A Chacoan craftsman would have been much faster. Still, there were approximately 2,500 beads in the necklace from Pueblo Bonito, as well as thousands of additional beads and pendants found at this and other sites in the canyon. If we estimate five minutes per bead to make just one perforation, it would have taken at least 208 hours just to drill the holes in this one necklace, let alone form the bead blanks, polish the beads, and string the entire set into a necklace. In short, it took a lot of time to make this kind of jewelry.

The inhabitants of the Spadefoot Toad Site were not the only jewelry makers in the canyon. Windes infers that jewelry making was carried out at several other sites in Marcia’s Rincon and the Fajada Gap Community. In none of these other sites do we have as extensive evidence as at the Spadefoot Toad Site or see a full-time specialist at work; yet the time and labor involved to make all of the jewelry items recovered in Chaco Canyon suggests that many workers must have contributed to the lapidary crafts. The evidence from sites in Chaco Canyon suggests the jewelry makers were probably much like Judd’s Zuni workman, who, depending on the time of the year and the opportunities available to him, was a farmer, a jewelry craftsman, and an archaeological assistant at Pueblo Bonito.