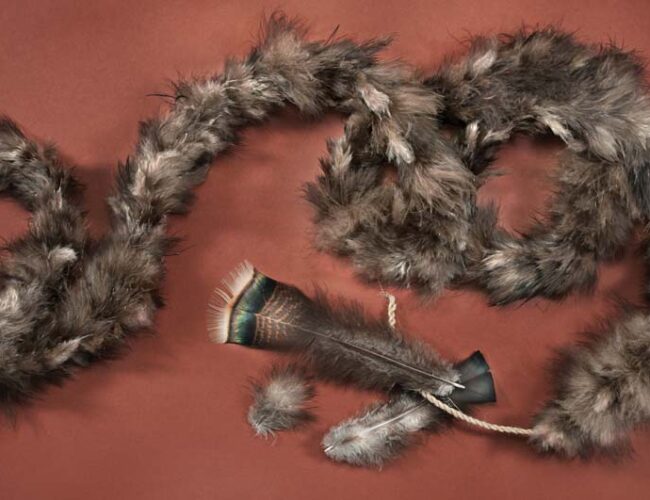 Turkey feathers applied to a length of yucca cordage in the Jemez style by Eric Blinman, director of the Office of Archaeological studies. Woven into a blanket, these feathers provided ideal protection against the cold. Blinman’s demonstrations of cordage fabrication and blanket weaving are a popular part of the outreach and educational programs of OAS. Courtesy of Eric Blinman. Photo by Blair Clark.

When most people think of people living in caves, they think of ancient hunters killing mammoths and discovering fire. While this is not a misconception, people have lived in caves throughout history. The reality is that a cave is an ideal home in many ways. It provides protection from the elements, pests, and predators (including other humans), can be easily heated, and provides a cool environment in the summer months.

Perhaps the most important of these caves in Sandoval County is Jemez Cave. However, unlike Sandia Cave, to the east, Jemez Cave was not occupied by the Paleoindian hunters of great antiquity, but by early farmers. And why not? The dry, cool environment of the cave and its natural protection from pests made it ideal for seed storage.

University of Michigan archaeologist Richard Ford viewed Jemez Cave as one of the Southwest’s earliest agricultural sites, suggesting it may have been occupied as early as the mid-to-late Archaic period (ca. 1000 BC).

During this “preceramic” or Archaic period, people would have grown corn and pumpkins along the nearby Jemez River, stored food and other perishables in yucca-woven baskets, worn cotton clothes, and wrapped themselves in turkey-feather blankets. Such a lifestyle was far removed from that of the Clovis-period hunters and gatherers of 10,000 years before. Cotton could have been grown just outside the cave, and instead of being hunted, turkeys were bred in pens. These farmers were the immediate forefathers of the Jemez People and possibly already spoke the Towa, or Jemez, language.

Occupation of Jemez Cave did not end during the preceramic period. The cave continued to be lived in intermittently over the course of the next several thousand years. Archaeologists studying the cave find traces of the origins of pottery within the Jemez area starting with Santa Fe Black-on-white (AD 1200) all the way to late-style Jemez Black-on-white (AD 1700), produced in the area after the Spanish arrived in the sixteenth century. Even after the forcible removal of the Jemez People from the Jemez Mountains to the current Pueblo of Walatowa by Governor de Vargas in the late seventeenth century, the cave continued to be occupied by Jemez shepherds who drove their flocks into the mountains during the summer months and by members of the community who used it for ceremonial purposes.

Sheep had been brought by the Spanish into the Jemez Mountains in the late sixteenth century as part of the Franciscan effort to missionize the Jemez People. The domesticated animals provided food as well as material for clothing. These animals were instantly accepted and integrated into Jemez society, so much so that when the Jemez People cast out the Franciscans during the Pueblo Revolts of 1680 and 1696, they chose to keep their livestock.

Initially, Jemez Cave was considered to be of little importance to archaeologists. This changed in 1934, when several Jemez tribal members entered the Museum of New Mexico field camp at nearby Jemez Springs, hoping to sell a bundle of antiques. The bundle consisted of the mummified remains of a child enclosed in a turkey-feather blanket, along with a black-on-white water jar. They revealed that

these materials had been recovered from the cave while they were searching for gold. The archaeologists, led by Clyde Kluckhohn, commandeered the goods and chased the men off before settling in to examine what they had found. Archaeological excavations of Jemez Cave became part of a larger Civilian Conservation Corps project undertaken by the Museum of New Mexico, the School of American Research, and the University of New Mexico that sought—among other things—to rebuild San José de los Jémez Mission and open the site to the public as Jemez State Monument (now Jemez Historic Site). The attributes that made the site ideal for ancient farmers also created an environment that was a benefit to archaeologists. The cave’s steady temperature and protection from pests preserved many of the perishables that had been left behind. Some of the most intact examples of turkey-feather blankets and yucca cordage yet discovered were recovered from Jemez Cave, along with animal bone, seeds, and several intact human burials. These materials have provided the basis for archaeologists and anthropologists to understand and replicate past Puebloan culture from its preceramic beginnings until contact with Spanish colonists in the late 1500s.

Indeed, many have seen the materials recovered from Jemez Cave in museum exhibits throughout the United States, including Jemez Historic Site, or direct replicas of these artifacts. The weaving patterns and specific feathers used in the reproduced artifacts mirror the items made by early farmers of Jemez Cave nearly 3,000 years ago. Overall, the materials found in Jemez Cave have significantly enhanced our understanding of the past and highlighted the rich cultural heritage of the Jemez area as a whole.

Matthew J. Barbour is the manager of Jemez Historic Site in Jemez Springs, New Mexico. He was formerly an archaeologist with the Office of Archaeological Studies in the New Mexico Department of Cultural Affairs.