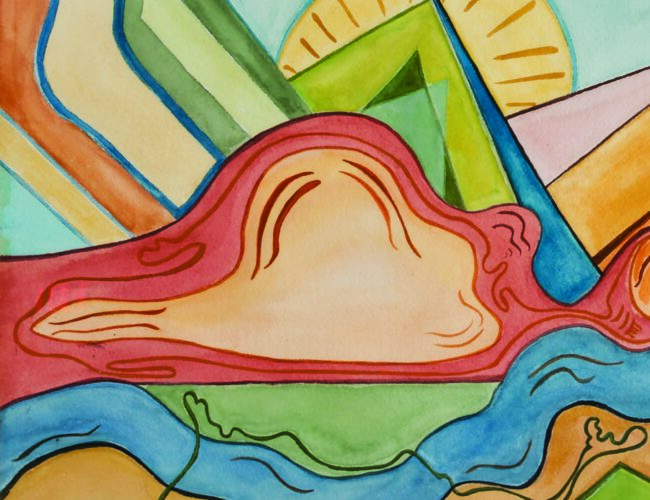 Orange and vermilion
make autumn fire:
red willows by the river.
My mind wants image,
meaning, wants these
brushstrokes to matter.
Speak for the world,
it says. Capture time.
Say Pilar, say October.
But what color is the cold
when I wade into the river?
What shape is the current?
My hand stutters, stops.
Better to empty my mind
the way cold does, into
pure sensation. Better
to subvert meaning, turn
the canvas upside down,
stand the world on its head.
I call that sunset, the mind
crows, not to be left out,
but this fluorescent bulb is not
the liquid light of evening
and no brush can follow
the canyon wren’s flight.
So scrape the sunset, score it,
say, This is a made thing,
human, pigment and cloth.
Cut it down to a size
my hand can grasp.
Extinguish that fire,
spray it hard and make it
drip, run red, but don’t say
rivulet, don’t say blood.
Step out of meaning. Leave
those old clothes on the bank.
Go naked into a new element.
Color has its own currents,
brushes their own skimming flight.
They give you the world
before you asked it to save you.
Plunge in deep, submerge!
Something will carry you—
chance and the river. Paint
like that and you can breathe
underwater. Paint like that
and be vermilion—catch fire!

Morgan Farley’s life is centered in writing and helping others to write. An award-winning poet, she was an editor and marketing director at the Museum of New Mexico Press, then spent twenty years in private practice as a psychotherapist for writers and artists. Currently she works as a freelance editor and writing coach when she isn’t writing or painting.