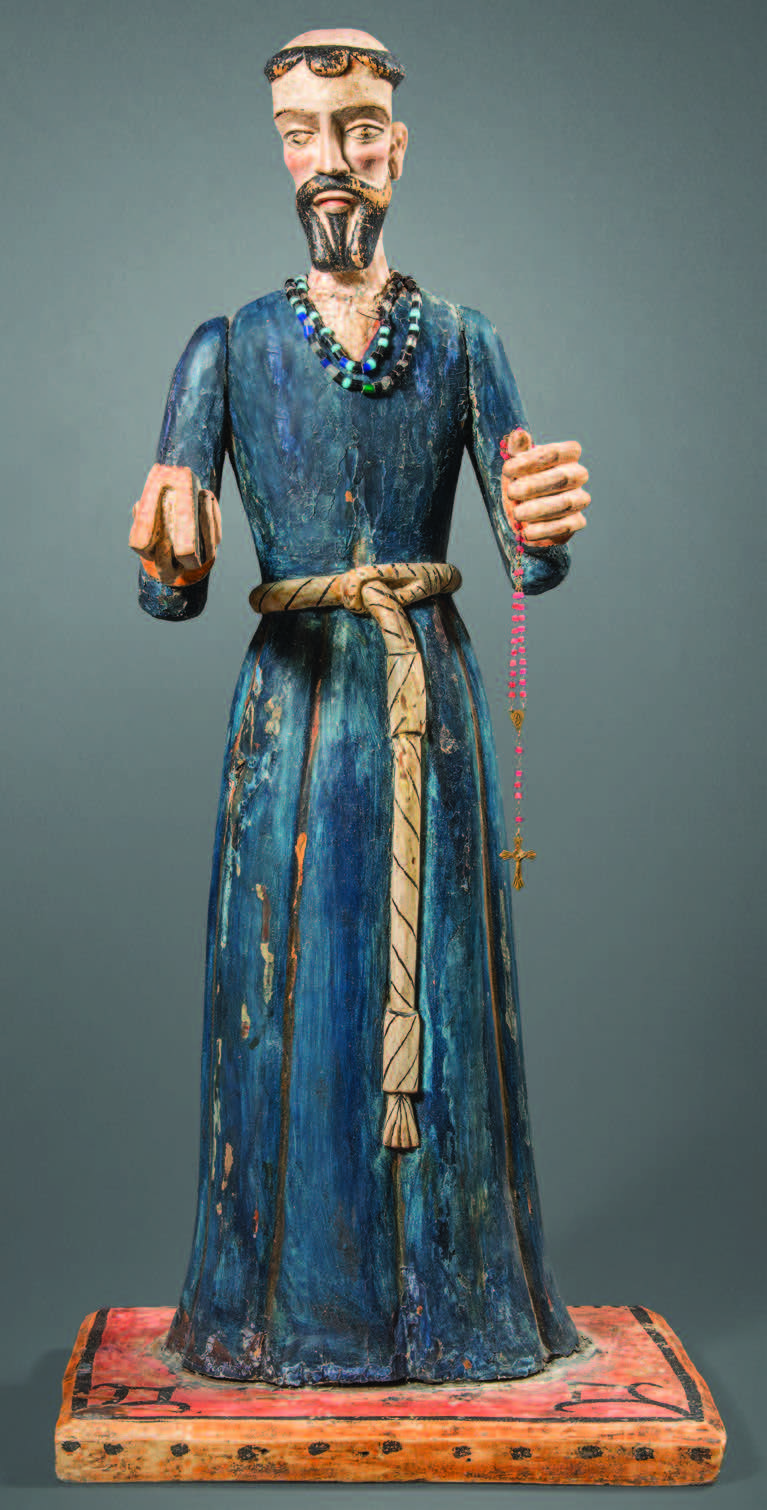 Indigo and Cobalt in New Spain

In 1957, as renovations were being made to the Conquistadora Chapel in the Cathedral of St. Francis of Assisi, one Franciscan friar was on hand to oversee the work.

His name was Fra Angélico Chávez. He watched carefully as dust and plaster were pulled from around an old sarcophagus embedded in the walls of the chapel, and was intrigued to see an inscription emerge, chiseled into the stone sides of the casket.

Fra Angélico Chávez was not your usual friar. He was also a passionate historian and author. He wrote numerous books on the history and culture of his native home, New Mexico, among them My Penitente Land, which stands as one of the seminal cultural histories of the Hispanos of the Southwest. He knew, therefore, when he read the inscription on the sarcophagus, that this was a burial of some import to the history of New Mexico:

Here lie the bones of the Venerable Father Friar Asencio Zárate, of the Order of St. Francis, an apostolic man, which were taken out of the ruins of the ancient church of San Lorenzo of Picuris, on the 8th day of May, 1759, and . . . transferred to this parish of the Villa of Santa Fe on the 31st day of August of said year. . . . He was a man admirable in penance and prayer through whom God worked some wonders.

Here lie the bones of the Venerable Father Friar Gerónimo de La Llana, Apostolic man, of the Order of St. Francis, which were taken out of the ruined mission of Quarac, Province of the Salinas, on the 1st of April, 1759, by the Lord don Francisco Antonio Marín del Valle, Governor and Captain-General of this Kingdom, who did the kindness of paying for this sepulcher. . . . He was the oracle of this Custody.

For the two scholars this was one of those “aha!” moments that happen rarely in a lifetime. The traditional color of the Franciscan habit since the founding of the order by St. Francis was the natural brown or gray of the wool from which it was woven. These “gray-robed” friars, as they were commonly called, were known the world over. Yet in New Mexico, it was the “blue-robed” friars who ventured north from Mexico City and who remained the only friars in the Franciscan custody of New Mexico for the entire colonial period (1598–1821). Fra Angélico knew this, and E Boyd knew this, but few others did, and fewer still believed them. Here, finally, was proof that the friars of New Mexico did wear blue. No longer could authors and scholars write disparagingly about the New Mexican santos and their creators and claim that the artists made up the color blue for the friars’ habits—here was the proof that those artists had been portraying the truth.

Since that propitious day, other evidence has come to light not only about the nature of the garments of these blue-robed friars, but also about the use of indigo and indigo-dyed fabrics throughout the colonial period. Josie Caruso, an independent researcher based in Santa Fe, has built upon previous scholarship, combing colonial archives and transcribing documents that outline the specific grades of weaving for these indigo-dyed frocks. She has documented indigo dye being brought to New Mexico in lump form to color blue yarns of various hues, and bolts and bolts of indigo-dyed fabrics shipped for use by the vecinos as well as by their Indian allies.

From this blue yarn and these blue fabrics of linen, cotton, wool, and silk, the Hispanic vecinos and the Native indios both wove and sewed items to fill the households and clothe the residents of colonial New Mexico. Frazadas, or blankets, were used for warmth and for seating (rolled on the floor, as was the custom); Saltillo-style ponchos were thrown over the shoulder or covered a herder or merchant at night on the trail; embroidered colchas, or bedspreads, adorned both home and altar; and jackets, vests, pants, and skirts were fashioned from varas and varas of indigo-dyed cloth.

Indigo filled the homes of nuevomexicanos then and now. Indigo was brought as a dyestuff up the Camino Real from Mexico, Guatemala, and El Salvador, where it had been grown since antiquity, and the indigo-dyed fabrics that came with it may have come from Mexico and as far away as Europe and Asia. Today’s accomplished weavers have revived the use of natural indigo and weave blue yarns into their textiles, which are both functional and aesthetic. Santeros have renewed the use of indigo as a pigment and experiment with this and other natural pigments on their retablos and bultos. Indigo continues to play an important role in the artistic traditions of what was once New Spain.

The exhibition Blue on Blue: Indigo and Cobalt in New Spain explores the use of these two dominant blues in the colonial period through over forty-five objects from the museum and private collections. Accompanying items imbued with indigo are the stunning Mexican tin-glazed earthenware vessels known as mayólica. The potters of New Spain used manufacturing techniques brought from Spain and combined them with a palette derived from Chinese porcelains and motifs from the Americas to create a uniquely Mexican expression. Adorned with bold, lavish designs in cobalt, these ceramics colored the homes of colonial New Spain. Blue on Blue: Contemporary, a companion exhibition, will open on Saturday, November 14, 2015, and will feature work by contemporary Spanish Market artists in textiles, paintings, and sculpture.

Robin Farwell Gavin is chief curator for the Spanish Colonial Arts Society and the Museum of Spanish Colonial Art in Santa Fe, and formerly a curator at the Museum of International Folk Art. Her books include Converging Streams: Art of the Hispanic and Native American Southwest (coedited with William Wroth; Museum of New Mexico Press) and Cerámica y Cultura: The Story of Spanish and Mexican Mayólica (University of New Mexico Press).