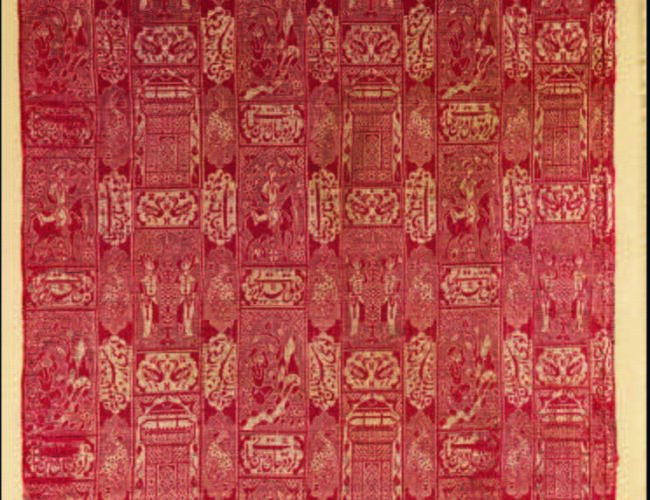 On April 8, 1614, Castilian nobleman Don García de Silva y Figueroa set sail from Lisbon as the emissary of Philip III, ruler of the Habsburg Dynasty of Spain and Portugal, to ‘Abbas I, ruler of the Safavid Dynasty of Iran.

Don García’s trip was but one in a series of exchanges begun during the late sixteenth and early seventeenth centuries generally aimed at strengthening diplomatic, military, and commercial relations between these Christian and Muslim powers. The more specific goal was to create a defensive alliance against Ottoman Turkey, then the common enemy of Europe and Iran.

As was the norm for such international missions, the 1614 fleet carried several hundred gifts that Don García was to present to Shah ‘Abbas on his and King Philip’s behalf. This substantial gift ensemble, carefully selected and laboriously assembled over several years, was itemized in several contemporary registers or inventories, as well as in the Comentarios, Don García’s account of his voyage to Iran. One record, dated March 7, 1614, identifies the group of presents from King Philip and includes the following item:

Don García himself provides other noteworthy information and observations about the same gift:

The specifics of this particular item and its incorporation into the diverse gift collection transported by Don García are more detailed than the listings for the many other presents. In short, the transfer of five large barrels containing 30 arrouas (arrobas) of cochineal, the equivalent of 750 pounds and valued at four thousand ducats—more than eighty-two thousand silver pesos in contemporary currency—was authorized by the head of Spain’s central commercial office for the Indies and was shipped to an agent in Lisbon for delivery to Don García. The Habsburg ambassador himself characterized the cochineal in superlative terms, extolling its properties as a colorant and both its absolute and relative worth. Judging from the values recorded for other items—for instance, a dozen silver vessels, including six large urns bearing the royal coat of arms, three large basins, and three aquamaniles, altogether valued at fifty-two hundred ducats—Don García may have exaggerated the worth of the five barrels and their contents. It is possible, however, that pound for pound, the cochineal did monetarily outweigh everything else within the gift cargo bound for Iran.

Although Don García regarded cochineal as an expensive substance, and presumably as an especially precious or unique offering for the Persian ruler, in the end, the gift did not seem to make any particular impression in Iran. Indeed, when the ambassador and his party finally reached their destination after over four years of travel and presented the Habsburg gifts at the Safavid court in Qazvin on July 16, 1618, the only object known to elicit any reaction was a large crystal chest with gold columns, which Shah ‘Abbas admired “as a rare and valuable thing.” The seemingly indifferent Safavid reception of cochineal raises two separate issues about the dyestuff: one concerning its presence or availability in Iran prior to 1618, and the other regarding the possible use or disposition of the 750 pounds brought by Don García.

As in other visual traditions, the color red was ubiquitous within works of Islamic art, including those created in Iran during medieval and early modern times, and with multiple compositional treatments, aesthetic effects, and symbolic associations. As described in treatises from as early as the eighth to tenth centuries and as confirmed by twentieth-century scientific analysis, Persian artists and artisans used many different natural and synthetic substances of regional origin for their red colorants. The pigments and dyes created a wide range of shades and tones, each known by a distinctive name. Insects that were particularly prized for producing a deep and bright crimson color included various aphid species of the Coccus genus, such as Porphyrophora hameli, indigenous to Azerbaijan and Armenia, and Kermococcus vermilis (or Kermes vermilio), whose expanse stretched from the Mediterranean across the Fertile Crescent and into the Iranian plateau.

Exactly when Dactylopius coccus (cochineal)—with its capacity to create even more brilliant red dyestuff than kermes—entered the Persian dye repertoire has yet to be firmly established. It is generally understood, however, that cochineal was being imported into Iran through trade routes from the Levant during the sixteenth century. Iran’s potential as an important market for cochineal was underscored by recurring references to the detrimental effects on trade created by ongoing warfare between Ottoman Turkey and Safavid Iran and to the anticipated commercial advantages of peace in correspondence between merchants in Italy and Spain dating from 1580 to 1582. Likewise, Spanish documents from the last quarter of the sixteenth century mention Persia (Iran) among the countries where cochineal was held in high esteem, and an English source of 1618, the same year Shah ‘Abbas received Philip III’s gifts, reported that Iran was getting cochineal from Turkey and Barbary (North Africa) and exporting it to India. Thus the five barrels brought by the Habsburg delegation hardly would have constituted a novelty at the Safavid court. In short, the gift may have held greater significance for its donor than its recipient.

As for the use of cochineal in Safavid Iran, recent conservation testing has confirmed that American, as well as Armenian, cochineal was the source for bright red motifs, including animals, figures, and inscriptions, in selected silk textiles and carpets from the sixteenth and seventeenth centuries. Analysis of sixteenth-century Persian paintings also might help determine a more precise time frame for the appearance of American cochineal in Iran. It is tempting to suppose that red textiles attributable to the reign of Shah ‘Abbas were dyed with the Dactylopius coccus received from Philip III. And if such a fanciful notion can obtain, it is equally tempting to imagine that the Persian verse “There has never been a garment of such beauty,” on one of the silks now known to have been woven with cochineal threads, was inspired by the cloth’s perfect red.

On the other hand, given the apparent Safavid practice of recycling or redistributing gifts, it is just as likely that the five Habsburg barrels were never even opened in Iran and instead were consigned straightaway for export to India. Thus one monarch’s costly gift may have become another’s commercial commodity, thereby bringing cochineal’s intercultural circulation full circle. n

Marianna Shreve Simpson is a visiting scholar at the University of Pennsylvania. She is guest curator of the forthcoming exhibition The Peck Shahnama: Princeton’s Great Book of Kings at the Princeton University Art Museum.

Editor’s note: “Five Barrels of Cochineal” is excerpted from A Red Like No Other: How Cochineal Colored the World, the companion publication to The Red That Colored the World exhibition, on view through September 13, 2015, at the Museum of International Folk Art. Edited by Carmella Padilla and Barbara Anderson, principal photography by Blair Clark (New York: Skira Rizzoli, 2015). Extensive endnotes to this essay may be found in the original version in that volume. Used by permission.