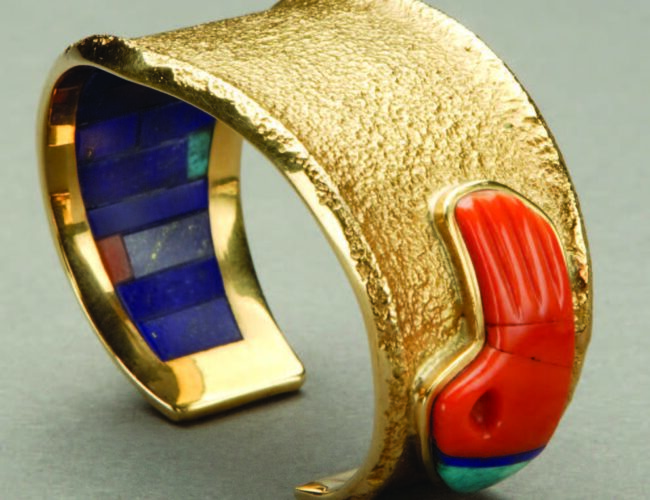 This summer the Wheelwright Museum of the American Indian celebrates the opening of the Jim and Lauris Phillips Center for the Study of Southwestern Jewelry. This new wing comprises two galleries, a classroom, curatorial workspace, and an expansion of the museum’s sales shop, the Case Trading Post.

The larger of the new exhibit spaces will be the Martha Hopkins Struever Gallery, devoted permanently to jewelry and related traditions, such as hollowware, flatware, lapidary, and stone carving. A smaller gallery will be utilized for changing exhibitions on jewelry and other subjects.

The completion of the museum’s new wing and the first exhibitions installed in it represent the culmination of more than twenty years of collecting and research in this field. The museum’s emphasis on jewelry as a major art form runs counter to the practice of many other institutions in its field, where jewelry is treated as subordinate to the traditional arts of basketry, pottery, and loom weaving. The creation of the museum’s first permanent gallery represents a reinvention of New Mexico’s oldest nonprofit museum.

The Wheelwright Museum was founded in 1937 by Mary Cabot Wheelwright (1878–1958), a Bostonian by birth and a New Mexican by choice and season. Wheelwright was a lifelong traveler, fascinated by the world’s religions. Around 1920, on one of her first trips to New Mexico, she was exposed to Navajo religious thought, and she spent decades working with Hastiin Klah and other Navajo singers to develop a permanent record of their practices. That record — in the form of sound recordings, translations, and lengthy transcriptions — was combined with watercolor renderings of Navajo sandpaintings by Francis Johnson Newcomb and other scholars, as well as tapestries representing dry paintings by Hastiin Klah and other weavers, to become the core of the museum’s collection.

In its original configuration, the Museum of Navajo Ceremonial Art, as it was known in its early years, was experiential: upon entering, a visitor immediately descended a flight of stairs and then climbed another flight into the main gallery — the ascent evoking the Navajo emergence into the Fourth World. In the gallery were presented changing exhibitions of sandpaintings, through which Wheelwright hoped visitors would sense the beauty and dignity of Navajo spiritualism. In 1967 the museum changed the visitor entrance and added a stairwell to the back of the building, and the content of exhibitions began to shift toward Navajo secular arts. In 1975, at the request of the Navajo Nation, the museum became the first institution in North America, and perhaps in the world, to voluntarily repatriate sensitive items to a Native people. In 1977 the trustees voted to honor Mary Wheelwright by naming the institution for her.

At about that time the museum’s exhibition program began to evolve into one of the most innovative and admired in Santa Fe. The emphasis became one-person exhibitions of living artists, and among the first to be featured were Fritz Scholder and T. C. Cannon. This program has endured, and the museum has presented major exhibitions on dozens of luminaries, including Arthur Amiotte, David Bradley, Harry Fonseca, Darren Vigil Gray, Benjamin Harjo Jr., Allan Houser, Charles Loloma, Judith Lowry, Dextra Quotskuyva, Margaret Tafoya, Pablita Velarde, and Emmi Whitehorse.

For decades the museum enforced the use of its main gallery for this program, while at the same time acknowledging the need for a permanent exhibition. The obstacles presented by a permanent installation were huge. The museum knew that whatever it chose for the subject matter, it needed to distance itself from its roots in Navajo ceremonialism, and it had to develop an exhibition that distinguished it from other institutions in its field. The museum did not have the collections to support a permanent exhibition, so once it had determined the subject matter, it had to build a collection almost from scratch.

The first step toward an emphasis on jewelry, though not recognized as such at the time, was the 1995 acquisition of the papers of anthropologist John Adair (1913–1997), author of the landmark book The Navajo and Pueblo Silversmiths (University of Oklahoma Press, 1944) and a pioneer in the use of film in anthropology. Adair had conducted the fieldwork for his book in 1938 and had a long association with the Wheelwright Museum.

Adair’s papers fit well with a small group of related collections that the museum had acquired in previous decades. In the early 1950s, the museum received the papers of Washington Matthews, an army surgeon and ethnologist who published, among other things, the first scholarly article on Navajo silversmithing. In 1970 Byron Harvey III, the great-grandson of Fred Harvey, donated 265 examples of Navajo and Pueblo jewelry, tools, and related items. In 1973 Leonora Paloheimo donated a collection of Zuni carved-stone fetishes amassed by her mother, Leonora Curtin, between the mid-1920s and her death in 1972.

In 1998, recognizing the potential for jewelry as a niche, the museum began to cultivate collectors and donors to support the effort. However, the goal to create an encyclopedic collection of Native jewelry of the Southwest was not announced publicly, because it would appear unrealistic to many constituents. The museum made its first major purchase in 2002, when it acquired 180 Navajo and Pueblo spoons from the collection of the late Carl Lewis Druckman. This was celebrated in 2003 with the exhibition, A Stirring Story: Navajo and Pueblo Spoons, which included most of the Druckman collection and more than 200 examples from other sources. This purchase was more than an acquisition. It signaled the museum’s intent to acquire media and forms that were not represented in other museums.

The museum’s 2005 exhibition on Charles Loloma was a watershed event, triggering gifts of numerous collections or the funds to acquire them. In the ten years since that exhibition, the museum has achieved its goal; every major development in Navajo and Pueblo jewelry is now represented, from the origins of silversmithing to the present, from the use of plastics to stainless steel and carbon-fiber composites, and from iconic forms such as concha belts and squash-blossom necklaces to humorous — even cartoonish — representations.

One important aspect of the museum’s collection is the extraordinary number of well-documented or attributable examples of work representing traditions, artists, and collectors of New Mexico. The most notable New Mexican collector is Leonora Scott Curtin (1879–1972), who was raised in Pasadena, California, and moved to Santa Fe in the 1920s. Curtin is known locally for her family’s historic home, Acequia Madre House, and for the historic El Rancho de las Golondrinas, which she and her family acquired, restored, and donated to be a living-history museum.

Curtin began collecting Zuni fetishes in the mid-1920s. She acquired several from such noted traders as C. G. Wallace of Zuni and Mike Kirk of Manuelito, who sold them as old, traditional fetishes for personal ritual observations. Research has shown instead that Curtin’s collection is the finest group of fetishes made by the first generation at Zuni to carve for a commercial market. Included are superb, early examples of the work of such famous artists as Leekya Deyuse, Theodore Kucate, David Tsikewa, and Teddy Weahkee.

Many other pieces passed through the hands of New Mexicans known to almost all readers, such as Mabel Dodge Luhan, or to at least some readers, such as the late Tony Garcia, a famous “picker” who collected in the pueblos and in Spanish New Mexican villages for many decades. The provenance of all such pieces will be given when known, and this will apply even to pieces acquired in the past twenty years. We want visitors to know that collecting today is no less important than collecting a century ago, and that documentation is not only invaluable, it is essential.

We close by acknowledging the museum’s most notable collector and donor. Lauris Phillips (1928–2013) was born in Los Angeles and lived in southern California her entire life. Phillips began collecting in about 1967, starting with a few pieces of jewelry inherited from her mother, and she continued until 2012. With her husband Jim, Lauris also collected Native American basketry, Pueblo pottery, and Navajo textiles. For many years they dealt in Native American art as Fairmont Trading Company, and every August they had a booth near the entrance to the Whitehawk Antique Indian Art Show, then held in Santa Fe’s old Sweeney Convention Center. In 2010 Lauris and Jim offered Lauris’s jewelry collection to the Wheelwright Museum. Their gift in 2013, together with gifts from numerous other collectors nationwide, has made the Wheelwright Museum’s dream a reality.

Jonathan Batkin is the director of the Wheelwright Museum of the American Indian.

The Wheelwright Museum of the American Indian is located at 704 Camino Lejo, on Museum Hill in Santa Fe. 505-982-4636; wheelwright.org.