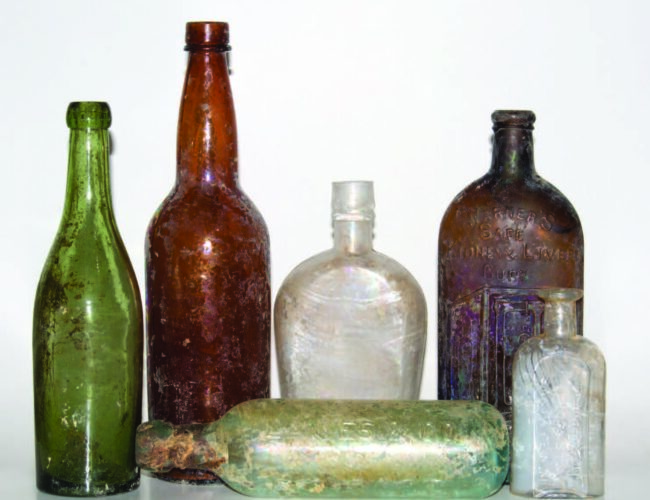 Medicine and alcohol bottles from excavations at the site of the Fort Marcy Military Reservation. Photograph by Gloria Lovato.

On August 15, 1846, General Stephen Watts Kearny stood on top of a roof in Las Vegas, New Mexico. While an army from Fort Leavenworth, Kansas, marched down the road in front of him toward the provincial capital of Santa Fe, he explained the intentions of the United States government to a crowd of local residents: “From the Mexican Government you never received protection. The Apaches and Navajos come down from the mountains and carry off your sheep, and even your women, whenever they please. My government will correct all of this. It will keep off the Indians.”

Three days later, on August 18, Kearny’s army, comprised of 300 dragoons, 500 Mormons, and 1,000 Missouri volunteers, captured Santa Fe without “firing a gun or shedding a drop of blood,” unofficially ushering in the beginning of US jurisdiction and the American Territorial period in New Mexico. The next day, Kearny ordered a reconnaissance of Santa Fe to select a site for a fort to headquarter the US garrison. On August 24, only six days after arriving in Santa Fe, the army began to occupy those buildings in the Spanish presidio that were not in complete disrepair and to build a star fort and blockhouse overlooking the city. The general named this new symbol of US dominion Fort Marcy after President James Polk’s secretary of war, William Marcy.

To the Mexican residents of Santa Fe, Fort Marcy was pitched as a means of protecting the settlement from Native American raids. However, military correspondence tells another tale. Lieutenant William H. Emory commented that fort construction was actually necessary “in case of extremities,” meaning the possibility of local resistance, and that from the fort “every house [in town] could be leveled on the least appearance of revolt.”

Santa Fe stood at the confluence of three major trade networks: El Camino Real de Tierra Adentro, the Old Spanish Trail, and the Santa Fe Trail, which linked the capital, respectively, to central Mexico, California, and the eastern United States. Control of Santa Fe meant control of the American Southwest, and the actual purpose of the military reservation, beyond ensuring the fealty of the local population, was to establish and keep that control.

Any challenge to US control and the trade networks which led into Santa Fe was met with overwhelming force. Soldiers from Fort Marcy participated in quelling the Taos Revolt of 1847, the western extension of the American Civil War through New Mexico Territory, and the various campaigns against the Navajos. They committed atrocities such as the forced confinement of Native Americans in the Bosque Redondo Indian Reservation and served as government-bankrolled thugs to protect the coalition of politicians and businessmen now known as the Santa Fe Ring.

Unsurprisingly, views of the military post and the city it controlled were far from flattering. Lieutenant Colonel Edwin Sumner referred to it as “that sink of vice and extravagance,” choosing to move his department headquarters out of Santa Fe to the newly constructed Fort Union for a brief period in 1851. This did not last. Command of all military actions in New Mexico returned to Fort Marcy shortly thereafter, which housed, among other things, the Palace of the Governors—seat of civil authority in the territory.

The delineation between civil and military rule was often not clear. Following the Taos Revolt of 1847 and for most of the American Civil War, New Mexico Territory fell under martial law, which meant that command of the territory was directly held by army officials stationed at Fort Marcy. At other times, rule of New Mexico ostensibly fell to civil officials, but military suzerainty was never far away. Fort Marcy’s headquarters were positioned, quite literally, across the street from the legislative chambers. Even today, when the seats of both state and military authority have long since moved elsewhere, local government—City Hall—is still housed within the former footprint of the Fort Marcy Military Reservation.

Between 2004 and 2008, archaeologists working for the Office of Archaeological Studies, including me, had the opportunity to take a good hard look at the Fort Marcy Military Reservation. The City of Santa Fe was in the process of building a new convention center across from City Hall, a location known to have once housed the quarters of the fort’s officers, noncommissioned officers, and enlisted men.

Archaeological excavation was required by law before construction could begin. The excavations uncovered not only the foundations of the buildings, but also the refuse pits and cesspits that once served the inhabitants. Archaeologists collected over 70,000 artifacts associated with the soldiers, including West Coast oysters, Chinese porcelain, and Irish soda bottles, among many other things.

Unlike military personnel stationed at more isolated posts, the men at Fort Marcy lived a fairly swank lifestyle. The abundance of nonlocal products among the artifacts illustrates the access to commercial goods afforded by the position of Fort Marcy at the confluence of three major trade networks. As expected, the soldiers were in a position of economic and political power, and their wage-based jobs, in a city with a traditional barter economy, allowed them to buy anything their hearts desired. Nevertheless, we were surprised to discover some of the types of goods the soldiers chose to consume.

Alcohol has always been a problem on military installations. While policies at most posts forbade its consumption, alcohol use was endemic throughout the ranks. This is clearly visible within the archaeological record at Fort Marcy, especially in the cesspits. Soldiers appear to have drunk illicit products to excess and then disposed of the evidence in the outhouse.

And they didn’t just drink liquor. Any product whose primary ingredient was alcohol would do, including most patent medicines sold in the nineteenth century. While products such as Progst & Kirchner and Kansas City Brewing beer bottles appear in the assemblage, so do Dr. Siegert and Dr. J. Hostetter’s bitters.

Some of these “medicines” may have had legitimate business in a privy. Hunyadi Janos, produced by Andreas Saxlehner of Budapest, was a popular brand of laxative among the soldiers. Janos was a national hero credited with driving the Turks from Hungary in the fifteenth century. This hook of military fame was not lost on the manufacturer, who claimed that their product cured “liver problems” and removed “piles,” that is, troublesome tumors or swellings about the anus and lower part of the rectum, now more commonly called hemorrhoids. Of course, Hunyadi Janos may have also contained a strong dose of alcohol.

The consumption of alcohol was so prevalent at Fort Marcy that patterns can be discerned across rank. Officers drank more wine. Enlisted men preferred whiskey. Interestingly, noncommissioned officers often chose beer, a pattern perhaps best explained by the fact that many NCOs were German and Irish immigrants.

Alcohol was not the only “indulgence” found within the cesspits (historical archaeologists sometimes place items used primarily for their intoxicating effects in their own category). Far more surprising was the presence of Ferguson-type syringes. While Fort Marcy possessed medical facilities, syringes were distributed across a wide variety of contexts. The highest concentration occurred in the enlisted men’s privy, suggesting the recreational use of drugs injected by soldiers stationed at the post. Morphine addiction, often referred to as “soldier’s disease,” was not unheard of, particularly after the American Civil War. However, the number of syringes and syringe fragments at Fort Marcy was nearly double the number of tobacco pipes found. Historic accounts suggest cigars and cigarettes were quite popular throughout New Mexico, particularly in association with fandangos thrown in Santa Fe. This is not to say tobacco was not favored by soldiers at Fort Marcy, but the biodegradable nature of tobacco products does not allow for their preservation in the archaeological record.

Soldiers loved their fandangos. These events, apparently a sort of social ball, were often held nightly and provided the soldiers yet another opportunity to consume alcohol, tobacco, and illicit drugs. Joseph Pratt Allyn, an American traveler to Santa Fe in 1863, suggested the events were “supported by Americans” and wrote that “champagne flowed like water.” It was also an opportunity to meet women, and soldiers sometimes took companions from among the Mexican dancers. In one written account, it appears that a soldier didn’t care that the woman was already married, and paid her husband a fee to keep her company.

Given the nature of life at Fort Marcy, it should come as a surprise to no one that the military installation was repeatedly targeted for closure throughout its nearly fifty-year existence. Because of the shady reputation of fandangos, Lieutenant Colonel Edwin Sumner even went so far as to call on Congress to abandon New Mexico Territory altogether. Eventually, political functions were moved outside the post with construction of the new Capitol Building in 1886. Military personnel were then transferred to Fort Stanton in 1895, before Fort Marcy was sold at auction in 1904.

The archaeological and historical record relating to Fort Marcy paints a rather bleak picture of the military post. Claims of the debauchery at the Fort Marcy Military Reservation are certainly well founded. Is this to say all soldiers stationed were corrupt drunkards or druggies? No, but many probably were.

Matthew J. Barbour is the manager of Jemez Historic Site.