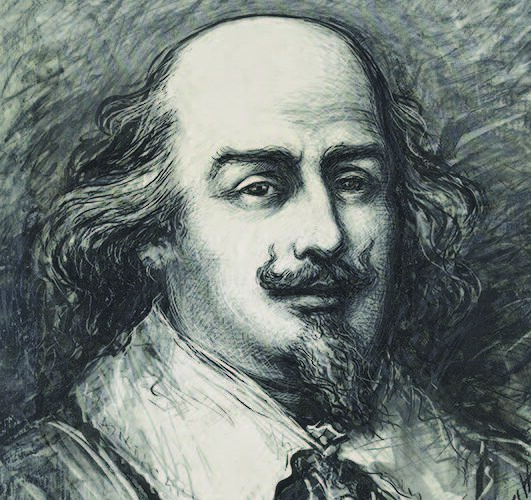 When William Shakespeare died in 1616, eighteen of his plays, including Macbeth, The Tempest, and As You Like It, had not been published. Seven years later, in 1623, two members of his troupe collected his plays into Mr. William Shakespeares [sic] Comedies, Histories, & Tragedies, a book now referred to as the First Folio, and one of the most important in the history of print.

Were it not for the editing efforts of his fellow actors John Heminge and Henry Condell, many of Shakespeare’s greatest works might have been forever lost. The book’s frontispiece, an engraving by Martin Droeshout, is a now-iconic portrait of Shakespeare, which, though made posthumously, was considered an excellent likeness by people who knew him.

Of the roughly 750 copies of the First Folio published, 233 copies survive, the largest collection of them, 82, held by the Folger Shakespeare Library in Washington, DC. To mark the four hundredth anniversary of Shakespeare’s death, the Folger is sending the Folio on the road, where it will be exhibited in a number of museums and libraries across the county. The New Mexico Museum of Art will be its sole stop in the state, in the exhibit First Folio! The Book That Gave Us Shakespeare (February 5–28, 2016).

The First Folio is one of those objects, like the Liberty Bell, the Mona Lisa, or the Sistine Chapel, that inspires pilgrimages. You have seen reproductions and derivatives of it throughout your life, but to stand in the presence of the actual thing itself is a swoon-inducing, heady encounter with a founding work of our culture. Even were it not so culturally significant, the book itself is imposing. The word “folio” refers to the book’s jumbo format: a folio is a large sheet of paper printed and then folded in half, creating four pages. The size indicates that at the time the book was published, it was considered a very significant volume: the grand format was more commonly used for herbals, law books, and theological texts, and not for popular entertainment, as plays were then considered. This was the first folio of plays ever published, and it sold well enough that several more Shakespeare folios followed.

At the Museum of Art, the Folio will be open to the page that contains some of the most echoed poetry in the English language, Hamlet’s “to be or not to be” soliloquy.

The museum complements the Folio with an exhibition, Stage, Setting, Mood, that presents an overview of theatricality in the visual arts. The exhibition includes depictions of performers and performances and also more broadly examines the formal means artists employ to impart a sense of drama and setting in their compositions. Curator Carmen Vendelin has selected townscapes and landscapes that demonstrate a theatrical approach to nonperformance subjects, employing shallow, stage-like arrangements of landscape and architectural features, dramatic lighting to intensify mood, and narrative interaction. A selection of artistic meditations on the skull pays homage to Hamlet, who traditionally delivers his existentialist soliloquy holding and addressing a skull.

In conjunction with the First Folio’s visit, the Museum of Art has produced a series of free public programs and lectures that offer a month of Shakespeare immersion and has partnered with cultural institutions throughout Santa Fe and the state to explore and celebrate Shakespeare. The Press at the Palace of the Governors, dedicated to the printed word year-round, has also planned special events and exhibitions.

The Folger Shakespeare Library was founded by Shakespeare aficionados Henry Clay and Emily Folger, who discovered Shakespeare as college students. After college, Henry Folger worked in the oil industry, eventually becoming president and chairman of the board of the Standard Oil Company of New York (now ExxonMobil). Emily earned a master’s degree in English, writing her thesis on “The True Text of Shakespeare.” In the evenings she and Henry pored over auction-house catalogues and corresponded with book dealers. For forty years the couple worked to amass a collection of 200,000 pieces of Shakespeariana, dreaming of one day opening a library to share these treasures with the American people. In 1932 the Folger Shakespeare Library opened under the watchful eye of recently widowed Emily Folger. She later wrote of Henry Folger’s belief that “the poet is one of our best sources, one of the wells from which we Americans draw our national thought, our faith and our hope.”

This belief in the deep connection between Shakespeare and America is the reason the Folger is in the nation’s capital. Having a large collection of the folios in one place has been invaluable for scholars because proofing occurred during printing, resulting in variations in the printed versions, which scholars have painstakingly analyzed. Some copies also contain significant early annotations. Those annotated copies will remain in Washington, available to researchers, while one copy, selected for its overall excellent condition, including the sturdiness of its antique binding, comes west.

Cynthia Baughman edited El Palacio from 2010 to 2015. She grew up in the Washington, DC, area and was a frequent visitor to the Folger Shakespeare Library in her youth. As a college student in the 1970s, she had a summer job as a page at the Folger, fetching books from the vaults and stacks for readers (as credentialed visiting scholars and researchers are known at the Folger).

The exhibition Stage, Setting, Mood: Theatricality in the Visual Arts, at the New Mexico Museum of Art from February 5 to May 1, 2016, includes depictions of performers and performances and also more broadly examines the formal means artists employ to impart a sense of drama and setting in their compositions. The townscapes and landscapes selected for this exhibition demonstrate a theatrical approach to nonperformance subjects, employing shallow, stage-like arrangements of landscape and architectural features, dramatic lighting to intensify mood, and narrative interaction.

Reflecting the Folger exhibition’s focus on Hamlet, Stage, Setting, Mood includes a “to be or not to be” sub-theme of artistic meditations on the human skull. In the staging of Shakespeare’s Hamlet, the protagonist delivers his existentialist soliloquy while holding and addressing a skull. Visual artists have long employed the skull as a device for reflecting on mortality, death, and how an individual’s actions will be judged.