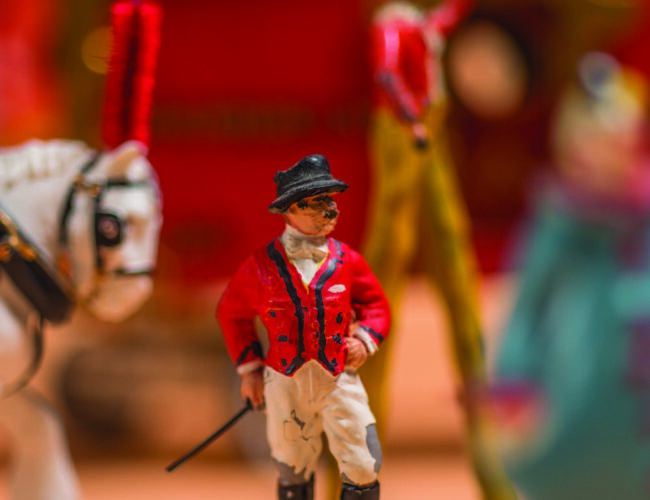 The golden age of the American circus (1870s–1930s) coincided with an era of modernization and mobility, most notably the expansion of the railroad. Although the circus in this country long predated the railroad—first making its appearance in 1792, when the Scottish equestrian acrobat John Bill Ricketts opened a riding school in Philadelphia—it was the railroad that allowed the American circus to grow in geographic reach, scale, and elaborateness.

The joining of Union Pacific and Central Pacific rails at Promontory Point, Utah, in 1869 opened the door to enterprising (and opportunistic) circus men such as P. T. Barnum to manage the complex logistics of the big-top circus of the 1920s and 1930s, thus growing their businesses in popularity and grandiosity.

From the 1930s until 1970, in his Amarillo, Texas, home and workshop, W. J. “Windy” Morris sought to capture this railroad circus of his youth in miniature. What started as a single circus wagon eventually grew into a model circus that consists of tens of thousands of pieces and occupies a footprint of nearly 11 by 14 feet.

The Morris Miniature Circus was acquired by the Museum of International Folk Art in 1984 and was last shown in 1986, to tremendous popular response. Now, thirty years later, the museum is reinstalling the circus after doing some muchneeded restoration to the ³⁄8-inch-scale figures and wagons and replacing motors, gears, and lights that have long since failed. The better-than-ever circus will be on view April 3 through December 31, 2016.

Windy Morris’s circus required him to learn as he went, acquiring skills such as mold making, casting, painting, and the operation of model railroads. He enlisted the help of his wife, Josephine, to make the tents and wasn’t shy about co-opting the home oven to bake his “little people” in their molds. His daughter Jo Ellett recalled in 1986 how his various work spaces became filled to capacity with his hobby—first the home basement, then the living room, and finally a dedicated workshop. “Working with as many diverse elements as the project entailed meant that numerous processes were on-going, simultaneously,” she wrote. “With such a mélange (literally, thousands of tiny parts and intricate models at various stages of completion) scattered about, no one could envision what the end result might be, except Windy, the artist with the master plan in his own mind’s eye.”

Morris demonstrated the same do-it-yourself tenacity he devoted to the miniature circus in whatever he did—in life and business. He was born in 1904 in Bentonville, Arkansas, to a father who was a one-time town mayor and co-owner of a lime quarry, and a mother who was the church organist. When his father became disabled in an accident at the quarry, young Windy shouldered much of the onus to support the family. The carefree days of his childhood, including memorable visits to the circus when it came through town, were replaced by adult responsibilities. At the age of fourteen, Morris attempted to enlist in the army at the outbreak of World War I but was rebuffed because of his age. He worked hard to finance his education, then started a farming business with his father-in-law despite a lack of experience in agriculture, teaching himself how to repair a tractor with a manual and implementing new methods in farming that he gleaned from research. Creating a miniature circus was a welcome respite, especially during the long winter months, when farm activity came to a halt.

In an unpublished manuscript that he wrote in 1950, Windy Morris recalled “the brightly decorated circus wagons” with teams of horses “fitted with plumes and wagons with flags” in the street parade that preceded the actual circus, a teaser to the crowds who gathered to witness the arrival of the circus. The street parade, after all, was free, and not everyone could afford admission to the big top. The spectacle of the parade, with its wagons, bands, performers, and menageries of wild animals, the unloading of the trains, and the raising of the tents, was something to behold. “Some observer,” said Morris, “wrote that the ‘second greatest show on earth’ is the moving and transporting of ‘The Greatest Show on Earth.’”

To re-create the circus, Windy Morris mined his personal memories but also researched wagons, performers and performances, circus banners, tents, and railroads in great detail. He participated in the national Circus Model Builders association, writing a piece for their publication Billboard, and made a pilgrimage to the Circus World Museum in Baraboo, Wisconsin, to see their collection of circus wagons. His miniature sideshow banners, for example, are based on real-life banners of well-known performers such as Sealo the Seal Boy and the Great Lorenzo. Details such as the design of the famous Two Hemisphere Circus Wagon or the Model T were of great importance to Morris to establish the time period of his circus, as they are to all circus-model builders and model-railroad enthusiasts. “[My father] envisioned an authentic working model, true to scale and handcrafted in detail,” Morris’s younger daughter, Susie Chambers, recalled recently. “His workshop was organized; he was skillful and disciplined. But it was his creative spirit combined with his love for the circus that brought the Morris Miniature Circus to life.”

The first iteration of Morris’s Miniature Circus took about fifteen years to complete. He traveled it to several destinations, such as state fairs in Texas, Oklahoma, Louisiana, and Minnesota, in the 1940s. Subsequently, he expanded and refined the circus but never showed it again other than to family and friends. Its permanent home became a workshop behind the house in Amarillo. At a certain point, the scale of this hobbyturned- enterprise became overwhelming even to Morris. As he wrote in his booklet: “The only drudgery encountered was making sufficient numbers of the same items to make the model complete. Molding, painting and harnessing one team of horses was fun, 19 hours of it, but finishing 135 horses grew into a task. Making a few little people was fun but finishing some 1600 of them was something else.”

The American railroad circus has been subjected to many critiques over the years, among them the exoticizing of racial difference, narrow-minded attitudes toward physical disabilities that are evident in the “freak show,” and the abuse of circus animals. Morris’s work reflects his joyful memories of the circus, but hindsight allows us to read the dark side of circus spectacle in what we see. The entrance to the sideshow tent boasts of the “Living Wonders” and “Strange People from all Corners of the Earth” to be seen within, while at the same time peddling the sideshow as a “Clean Moral Exhibit of Unusual Sights.” Such language illustrates how sensationalism and insistence on morality coexisted in the American circus. At the same time that some individuals were exploited for profit based on race, nationality, disability, or some other measure of difference, the circus business attempted to position itself as the arbiter of morality, providing an atmosphere of wholesome family fun even as it grappled with a deserved reputation for bringing crime and violence to town.

The Morris Miniature Circus gives us occasional hints of the social ills of the era. Besides what is now seen as the blatant sensationalism of the sideshow, Morris’s circus accurately reflects the racial segregation of the circus audience under the big top, evidence of Jim Crow–era discrimination that he took care to represent in miniature. A clear delineation is made in the stands between the white audience and the black audience. Just one spectator breaches the line—a white nun who sits among the African Americans in the audience in defiance of laws that extended everywhere, including the circus. Social criticism seems not to have been Morris’s objective. What is certain is that when visiting the Morris Miniature Circus, each generation of viewers will bring its own memories, anecdotes, and assessments of the American circus. Visitors will be invited to share these stories and thoughts in the exhibition gallery, thus adding another chapter to the evolving narrative of the circus.

Installing the Morris Miniature Circus will be nearly as much of a feat as it is to put up a full-size circus. Many agile fingers will install seven small tents—including the big top, the menagerie, the dressing rooms, the dining area, and the sideshows—by tethering fine, waxed-linen thread to nails on the platform. Hundreds of little people and animals need to be placed and secured without knocking over those tents—among them one small boy peering under a tent, said to be a portrait of the artist himself as a boy. The fragile circus wagons will be repaired now that the decades-old adhesive has deteriorated. LED lights will take the place of old, burned-out bulbs with brittle wiring, and a new motor with customized gears will run the mechanized street parade, performing seals, a circus hand driving tent stakes, and two men fixing their Model T. This work will be accomplished by a team of museum staff, consultants, and volunteers, all looking to honor the legacy of Windy Morris by bringing his circus back to town.

Laura Addison is the curator of European and American folk art collections at the Museum of International Folk Art. The Morris Miniature Circus opens on April 3, 2016, with “The Greatest Reception on Earth,” featuring performances by Wise Fool New Mexico.