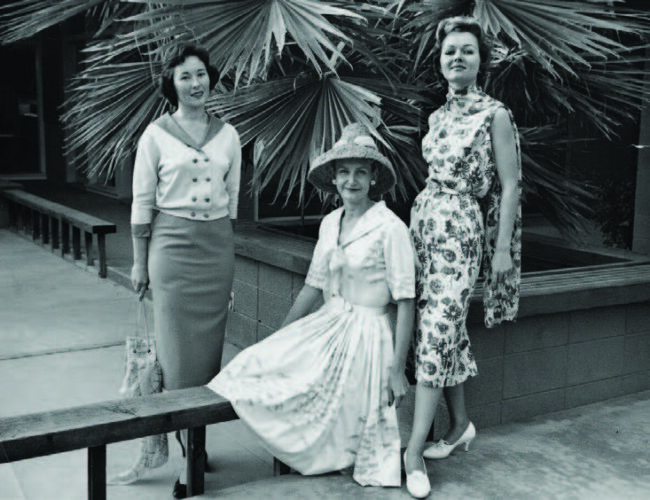 A New Century: The Life of Cherokee Artist and Educator Lloyd “Kiva” New, at the Museum of Indian Arts and Culture, commemorates the 100th anniversary of the birth of a Native pioneer in fashion design, entrepreneurship, and cultural art education. He blazed a trial that many are just beginning to tread.

Thanks to Lloyd’s widow, Aysen New, we have access to a treasure trove of writings, photographs, sketches, and artwork, much of which has never been seen publicly. Using this wealth of material, A New Century examines Lloyd Kiva New’s life through photographs, fashions, documents, and art. Through multiple meetings with Mrs. New, we discussed and developed a story about Lloyd and his myriad contributions to Native art and culture. We encapsulated that story in four sections in the gallery.

“Oklahoma” traces Lloyd New’s roots on the hardscrabble family farm where he grew up and shows how his life of daily chores and listening to Cherokee stories from his mother set a foundation of artistic and intellectual pursuit. “Student, Teacher, and Sailor” looks at his time as a student at the Chicago Art Institute and as a young art teacher in the American Southwest until he served in the US Navy during World War II. “A New Enterprise” tells of how handbags and clothes made the man known as Lloyd Kiva. And “New Horizons and the New Legacy” tells of how he left his successful entrepreneurial ventures and came to the Institute of American Indian Arts to pursue his vision of new methods in Native art education.

For me, it has been revealing to research the writings and documents and conjecture about what his priorities and dreams were at these different stations in life. In a sketchbook dating to his student years, New ruminated on sweethearts and art. Some of these writings are so privately expressive that I am only comfortable acknowledging their existence, but not their content. I came across a handwritten draft résumé from later on in which he was already stressing his experience with American Indian art education; here he mentioned the Laboratory of Anthropology, although he didn’t discuss it in detail. Luckily, these clues have allowed archivist Diane Bird of the Laboratory of Anthropology, archivist Ryan Flahive of the Institute of American Indian Arts, and researcher Elizabeth Murphy to find more information about this early period, to the benefit of grateful curators and future researchers.

Unearthed documents now confirm Lloyd’s presence at the Lab, the Santa Fe Indian School, and the University of New Mexico in the late 1930s. It was at this time that Lloyd Henri New (the “Kiva” would be added later) first met Dorothy Dunn. These two preeminent figures in American Indian art education had diametrically opposite teaching philosophies, yet both were committed to sharing Native art and culture with the world.

According to New’s soon-to-be-published memoirs, his formative years in Oklahoma were at the forefront of his mind later in life. It is typical, when one has led a storied life, to look back more often than forward, but I believe that there was more to this than nostalgic recollection. New’s childhood experiences led to a lifelong examination of what being Cherokee meant to him as a person and to his people. In so doing, he repeatedly drew correlations between his career and the cultural history of the Cherokee people. New seems to have believed that much of the pre-European-contact cultural practices of Oklahoma Cherokees were lost as a result of the forced relocations of the early 1800s. The uprooting of a people from their traditional homelands in the East to Indian Territory was devastating, since traditions and language are so strongly linked to place. As a result of this upheaval, new practices and traditions evolved, with echoes of the past, to reflect their new place of being.By adapting to new physical and ethereal environments, Cherokees were able to survive and, eventually, to thrive. This success is reflected in New’s story.

New’s life was shaped by finding his way from the Oklahoma homeland to drastically dissimilar areas. In each of these areas, his ability to quickly adapt to previously unfamiliar lifeways and environments served him well. In each, his personal strength was abetted by a cultural practice; everywhere he went, he was able to find success. This is just one aspect of Lloyd Kiva New’s story that has been illuminated in A New Century.

Tony R. Chavarria is curator of ethnology at the Museum of Indian Arts and Culture/Laboratory of Anthropology.