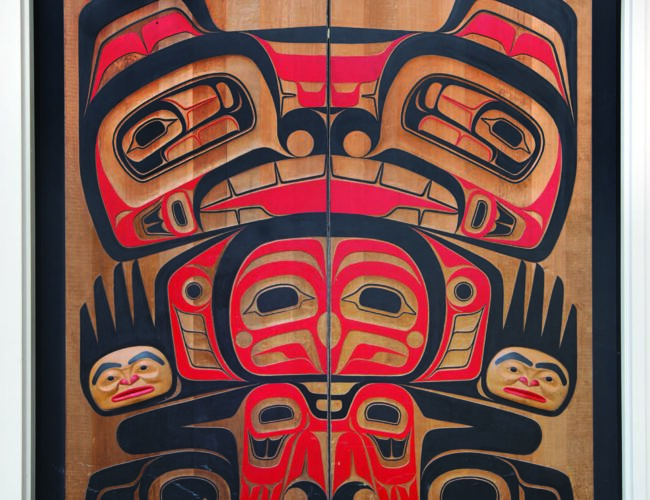 Marvin Oliver, doors of the Neutrogena Wing at the Museum of International Folk Art, 1984. Photograph by Blair Clark.

How many times had I passed through the doorway into the Neutrogena galleries at the Museum of International Folk Art barely noting what registered only as a handsome architectural decoration on either side? Then suddenly, emerging from the exhibition The Red That Colored the World, with my eye attuned to seeking out the color, I focused on the red elements of the 7-foot-tall carved and painted doors that flanked the entrance.

The powerful design was clearly an expression of Northwest Coast Native art on a scale we rarely see in Santa Fe; the only other monumental public example is the 14ó-foot totem pole at the Ralph T. Coe Foundation (open by appointment).

To my surprise the label credited the artist as Marvin Oliver (b. 1946), a Quinault/Isleta figure familiar to visitors to Indian Market for his creations in glass, graphic arts, and bronze. The doors date from 1984, when the artist was exploring the carving traditions of his father’s Quinault people, a Salish tribe of the coast of Washington State. Only later would he expand into the burgeoning field of art in glass.

There was a language in the carving and painting of these doors that begged interpretation, so I went to the writings of Bill Holm, the preeminent scholar of Northwest Coast Indian art. There I learned of the degrees of abstraction of images of animals, the shallow reliefs carved into cedar to follow the painted designs, the continuous black line that defines a creature, and the red that follows, adding a secondary complexity.

It was only when I returned to the museum to find the doors closed for the reinstallation of the galleries beyond that it all made sense. With the two parts of what had clearly been created as a single panel brought back together, I was confronted by a monumental bear outlined in black, sitting up on his hind legs, opening his giant mouth to show his teeth and extend his red tongue. But within that figure were other forms I could not decode.

I contacted the artist in Seattle, where he is a professor at the University of Washington and curator at the Burke Museum. He walked me through the stylized imagery of secondary elements that he said only developed as he sought to fill the outlines. In the bear’s forepaws are little human faces suggesting bear cubs.

The bear’s eyes are carved with salmon-trout heads, a motif common in Northwest Coast art. In the belly of the beast is the head of a red-painted eagle with its wings extending below. Closer examination revealed that the symmetrical composition was split and mounted in metal frames on the exterior of functional doors.

You might expect such a masterful Native carving to be an exhibit in the Museum of Indian Arts and Culture, not as a fixture in the nearby Museum of International Folk Art. Herein lies a tale of the creator and donor of the Neutrogena Collection, Lloyd Cotsen.

“He never wore blinders. His was an emotional response to works of art,” said Charlene Cerny, the MOIFA director who negotiated the donation of some 3,000 works, preponderantly textiles from all over the world, gathered by Cotsen. He often spoke of a passion that began during his naval duty in the Orient and took off when he became CEO of the Neutrogena Corporation, bringing the soap company to meteoric heights in the 1980s. Known to some employees as simply “the art guy,” he had both the funding and the space to turn the corporate headquarters in Los Angeles into a large-scale version of a European Renaissance “cabinet of wonders.” Justifying his changing installations of disparate unidentified works throughout the 350,000-square-foot building, he said, “I tried to expose the employees . . . to different cultures, to get them to look at things differently.”

Neutrogena was sold to Johnson & Johnson in 1994. As Cotsen described the transaction, “I made a deal to take all the objects and make them a disposable museum.” Luckily for Santa Fe, the curator who had helped form the collection, Mary Hunt Kahlenberg, had moved here from Los Angeles some years earlier, and she helped land the collection for New Mexico.

Among the few Native American works in the collection, Marvin Oliver’s stands apart in scale and importance. One might assume this was a corporate commission, but in fact it was a purchase from the Snow Goose Gallery in Seattle, snapped up from a young artist’s very first solo exhibition.

I discovered evidence of the collector’s personal connection to the piece in the MOIFA archives. Among the working papers for The Extraordinary in the Ordinary, the book that accompanied the inaugural exhibition of the Neutrogena Collection, is a typed sheet titled “Lloyd’s Photo List.” In the margin is a pencil notation with a question mark: “Northwest Doors?” Never discussed in the text, a detail of the cedar panel ended up as stunning endpapers, in accordance with Cotsen’s refusal to provide context to diffuse the excitement unexplained objects can trigger. Although the galleries of the Neutrogena Wing are now used for exhibitions beyond Cotsen’s acquisitions, Marvin Oliver’s bear stands guard, perpetuating a great collector’s delight in the unexpected.