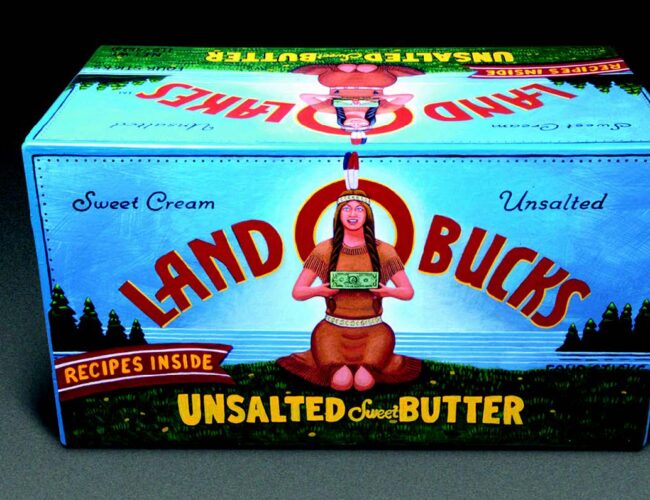 In contemporary art, Native American cultural power is located in the use of traditional forms, materials, and visual language, as well as in the traditional knowledge embedded in even the most modern of artistic expressions. Into the Future explores the ways in which indigenous artists have always employed and continue to employ visual imagery in the formation, perpetuation, and expression of their unique cultures.

Cultural objects play a significant role in how Native peoples define themselves, their communities, and the world around them; they also play a role in the way outsiders have historically interpreted and understood Native cultures. Recognizing the value of self-definition, Native Americans increasingly have sought to control the meanings associated with their cultural objects and through them the power to define personal and community identities and histories.

Using both traditional and introduced art forms, the nearly fifty named artists (and those artists we know only through their work) in the exhibition explore these identities and histories in the five thematic sections. The artworks in “Encounters with Cultural Outsiders” explore relationships with “the other” from an indigenous point of view. From there, the exhibition’s focus turns to acculturation, the strength of community, and deep connections to homeland in “The Power of Place.” The art of “Culture Jamming” lies in its ability to make visible the often difficult subjects of racism and cultural appropriation. And in the final two sections, “Cultural Continuity” and “Into the Future,” artists create new relationships between traditional and contemporary art, age-old symbolic representations and modern expressions, and integrate them seamlessly into the Native American world.

Artists critique cultural contact and its consequences throughout “Encounters with Cultural Outsiders.” This section begins with the most successful indigenous rebellion in the Americas: the Pueblo Revolt of 1680. Over the past decade, Jason Garcia (Santa Clara) has created a series of comic book covers from traditional Santa Clara Pueblo clays and pigments. The star of his Tewa Tales of Suspense—styled after the Marvel Comics character the Vision—is the historical person Po’pay.

In Garcia’s vision, Po’pay’s superhero pose and muscular body symbolize the strength and righteousness of the Pueblos in their battle against the oppressive Spanish colonizers, who are depicted cowering at his feet. In real life, Po’pay was a religious leader born at Ohkay Owingeh in northern New Mexico. From a base of operations at Taos, Po’pay and his allies laid out a plan to expel the Spanish from Pueblo lands. At a prearranged signal, each pueblo demolished its mission church, killed the resident priest and the Spanish settlers, and then converged on Santa Fe, the capital. Their successful routing of the Spanish proved to be crucial to the survival of the Pueblo culture and religion into the present. Although the Spanish attempted reconquests in 1681 and 1687 before achieving success in 1692, and conflicts between the two cultures continued, forced labor and religious suppression were replaced by a greater tolerance of difference.

Another part of “Encounters with Cultural Outsiders” addresses the Pueblos’ critique of the strange and intrusive Euroamericans who began settling in the territory that is now New Mexico when Mexico ceded control to the United States in 1848. Beginning in the mid-nineteenth century, other cultural outsiders—anthropologists and collectors of curiosities, in particular — began traveling to the Southwest to study its Native American populations and amass artifact collections for museums and private homes.

The practice of collecting is a European concept based on the idea that scholars can, and indeed must, preserve knowledge of other cultures by gathering and analyzing their objects. Beginning in the late nineteenth century and continuing through the mid-twentieth century, anthropologists, historians, and amateur  collectors undertook to document and preserve “disappearing” Native American cultures before they were lost to the advance of European colonization. Their expeditions resulted in the formation of vast museum collections of artifacts, and the removal of substantial quantities of objects of cultural patrimony from Indian communities.

Collecting often conflicted with two cornerstones of Pueblo life: privacy and the ability to share knowledge selectively. Thus, Puebloans often experienced outsiders’ collecting practices as acts of cultural violence. Included in the exhibition is one example of an imaginative, humorous, and profitable preemptive strike on the part of Zuni Pueblo potters.

In the early 1930s, with the complicity of the Zuni Pueblo trader C.G. Wallace, Zuni potters decided to fulfill collectors’ unnatural zeal for private information and objects by creating a suite of ceramic pots (nearly 250 are in the MIAC collections) purported to have been used only on the most “secret” and “ceremonial” of occasions. Sold for twice the cost of other Zuni pottery of the time, they were fantastical in shape, decorated with idiosyncratic designs, and artificially distressed to make them look older, increasing their value. It was not until the 1990s that Zuni religious leaders viewing the collection disavowed any knowledge of such ceremonial pots, and the ruse was exposed. While they might be an embarrassment for the curators who purchased them in the 1930s, today they are a valuable example of Zuni people’s creative reaction to outsiders’ prurient interest in the private aspects of their ceremonial life.

The Power of Place

This section features work by artists who create works that illustrate connections between their people, homelands, and histories, and how they inform challenging contemporary realities. Navajo artist Peggy Black’s basket trilogy, The Long Walk, references one tragic example of the intersection between place and community. A resident of Douglas Mesa, at the northeast tip of the Navajo reservation, Black literally incorporates her homeland through the use of sumac, a weaving material harvested locally. She wove the three baskets to honor as heroes those Navajo people who, in a series of removals beginning in 1865, were forced from their traditional lands in eastern Arizona Territory and western New Mexico Territory and marched at gunpoint by the US Army to incarceration at Fort Sumner, 300 miles away.

Hundreds died during the march, which took place in the dead of winter; approximately 9,000 Navajos reached the fort and the place known as Bosque Redondo. Four years later, after surviving intolerable internment conditions, the Navajos signed the historic US-Navajo Treaty of 1868. The treaty allowed the Navajos to return to a small portion of their original homeland in Arizona and New Mexico. Black represents the Long Walk in three narrative weavings that symbolically correspond to specific temporal aspects of the story. The basket triptych consists of a black weaving representing their descent into Bosque Redondo, a white weaving representing their emergence from the bosque upon their release, and a multicolored weaving representing the concept of hozho (balance and harmony), achieved once they returned to their ancestral lands.

The exhibition’s “Culture Jamming” section includes artists who have set their sights on mass media’s abuse of Native American imagery and the creation of caricatures to sell products or represent sports teams. The art of skilled “jammers” disrupts the nonNative public’s often oblivious acceptance of these culturally insensitive messages. Their variations on well-known images are antagonistic or antithetical to the original, and transform misappropriation into reappropriation.

For his Land O Bucks, Land O Fakes, Land O Lakes, David P. Bradley (Minnesota Chippewa) mimics the iconic butter packaging of the company, which is based in a suburb of Minneapolis–Saint Paul, Bradley’s hometown. Most consumers are unaware of the connotations of a Plains Indian woman’s image coopted to encourage the sale of a commercial product. The reinforcement of racist stereotypes through this type of advertising is stronger than many are prepared to acknowledge. Wearing generic Plains garb, the Indian maiden does something no self-respecting traditional indigenous woman would do: allow her image to be used to support a non-Native commercial enterprise.

Cartoonist Ricardo Caté (Santo Domingo Pueblo) is the only Native cartoonist featured in a daily mainstream newspaper, the Santa Fe New Mexican. His cartoon Without Reservations pokes fun at conventional conceptions of Native Americans, while skewering Native stereotypes, Anglo superheroes, and mainstream culture. In Caté’s cartoon My Cousin from Cleveland, the offensive logo of the Cleveland Indians baseball team, Chief Wahoo, is placed in a southwestern US desert landscape, where he is introduced to two understandably puzzled Indians. (In response to accusations of racism, in 2014 the Indians organization replaced Chief Wahoo, the team’s logo since the 1940s,  with a block-letter C and the word Indians as the team’s primary symbol. Chief Wahoo still adorns the jersey sleeves of players).

Cultural Continuity and Into the Future

The exhibition’s fitting conclusion, “Into the Future,” is in the exhibition’s Family Gallery. For Native families, biculturalism is an adaptive survival technique for living within the dominant Euroamerican culture of North America, where adult family members work to retain the knowledge and behaviors of their own indigenous culture and pass them on to their children. Here, the exhibition highlights artists’ sophisticated ability to view concepts from different perspectives and make new connections by recombining existing ideas. In this gallery, popculture imagery from cartoons, comics, and action movies is “Indianized,” or colonized, so that it is comprehensible in terms of Native American cultural values. In one case, SpongeBob SquarePants characters participate in the Corn Dance on a traditional pottery jar made by Santa Clara artist Jason Garcia. In another, Lego pieces dance across one of his painted tiles. Next to them, two Navajo weavings feature design elements familiar to children all over Dinetah (the Navajo reservation): Minnie and Mickey Mouse, and Sylvester and Tweety.

As students of culture, the artists represented in Into the Future have revived and made modern the artistic forms that invigorate and reinforce social relationships crucial to their community’s survival. Others are community members who learned their art from family, and see their work used internally as part of unique cultural practices. Today, many Native artists have formal educations and/or live outside their traditional communities. They often adopt the artistic forms of the colonizer and transform them into indigenous expressions by retaining traditional visual styles, symbols, or subject matter.

Regardless of the intent or style of their work, the artists in this exhibition prove repeatedly that they can accept and incorporate modern influences, while rejecting Western cultural dominance. Their indigenous expressions, projected into the future, will continue to be the hallmark of coming generations of Native American artists.

Valerie K. Verzuh curated the exhibition Into the Future: Culture Power in Native American Art, at the Museum of Indian Arts and Culture from July 17, 2016, through October 1, 2017.