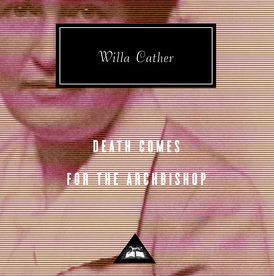 Cover of Death Comes for the Archbishop by Willa Cather.

I’ll begin my editorship with a shameful confession: after fourteen years in Santa Fe, I finally got around to reading Willa Cather’s Death Comes for the Archbishop while editing my first El Palacio. The timing was nonetheless perfect, as I was pleased to notice an uncanny amount of synergy between the book and this issue’s content.

The novel, an American classic, is based on Archbishop JeanBaptiste Lamy’s experience of serving as a Catholic leader in New Mexico and the West from 1851 to 1885. Centuries after Spain established Catholicism here, Lamy was given a mandate to reform the Church and its leaders, who had in many cases drifted from their priestly vows. Lamy’s legacy spans from the many fruit trees he planted in Santa Fe to the capital city’s majestic Romanesque Revival St. Francis Cathedral.

In the novel, the cathedral’s architect tells Jean Marie Latour (Cather’s name for Lamy), “Either a building is part of a place, or it is not. Once that kinship is there, time will only make it stronger.” Latour sources rock for the cathedral from a vibrant ochre hill in what is now Lamy. He proclaims, “I knew instantly that it was my Cathedral.”

Making a fine art museum for New Mexico out of the raw stuff of New Mexico was also very important to Edgar L. Hewett in 1915, as Khristaan Villela shares in “The Adobe Ambassador.” At a time when “brown and round” adobe buildings were being scorned as backward, Hewett fought to preserve Santa Fe’s local, organic architecture, a defining movement that endures to this day. Cather’s first trip to New Mexico was in 1912, around the time that the art museum’s architectural design was being conceptualized. In Death Comes for the Archbishop, Latour complains that “the year 1880 had begun a period of incongruous American building. Now, half of the plaza square was still adobe, and half was flimsy wooden buildings with double porches, scroll-work and jack-straw posts and banisters painted white.”

Mabel Dodge Luhan (whose pivotal role in the development of American modernism is traced by Lois Rudnick in “Creator of Creators”) hosted Willa Cather in Taos and acted as a resource as Cather researched Death Comes for the Archbishop. Cather was just one of many artists Dodge Luhan brought to New Mexico who found the state to be a muse that significantly influenced twentieth-century American art.

Among other examples of connection, Latour awakens the first morning in his Santa Fe residence, aroused by a church bell with a unique tone: “Full, clear, with something bland and suave, each note floated through the air like a globe of silver.” Dated 1356, the 800-pound bell was suspended from wooden crossbeams in front of San Miguel Chapel, because no adobe church tower could support its weight. It came from Spain, where it was cast during a war with the Moors. Cather wrote that the people of a Spanish city under siege brought all of their silver and gold goods to the foundry to make this bell, which accounted for its unique tone. As the Spanish learned silversmithing from the Moors, this literal fusion reminded me of the Santa María la Blanca synagogue in Toledo, Spain, as described by Ron Hart in “The Exile Factor”: designed by Moors, for the Jews, on Spanish Christian land. As a trope, “the melting pot” may no longer hold water, but in New Mexico we’ve inherited another take on otherness. Pojoaque’s Monsignor Jerome J. Martinez y Alire defined it this way: “In New Mexico you have all kinds of cultures, traditions, faiths, expressions, and we all get along. . . . Everyone is a minority and we have to work together to make it.”