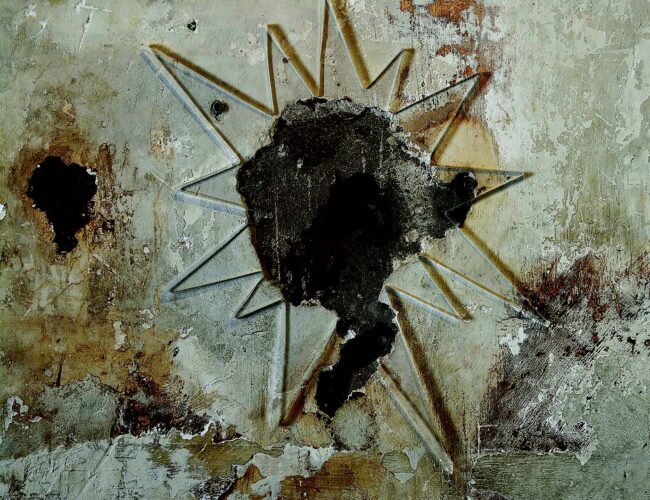 The bullet hole in question. Photograph by David Mandel.

At Lincoln Historic Site, theories have a way of coming out of the woodwork.

On April 28, 1881, William H. Bonney, aka Billy the Kid, arguably made the most famous jail escape in New Mexico history. Bonney was confined in the old Murphy-Dolan Store, which had been purchased by Lincoln County five months before and was being converted into the county courthouse.

The Kid struggled with Deputy Sheriff James W. Bell at the top of the stairs. Somehow during the process—and stories vary how—Bonney had obtained a pistol and mortally wounded Bell as he was fleeing down the stairs to avoid being shot.

No eyewitness accounts of the actual struggle were recorded. The closest account is Sheriff Pat Garrett’s investigation of the scene, conducted several days after the incident:

It was found that Bell was hit under the right arm, the ball passing through the body and coming out under the left arm. On examination it was evident that the Kid had made a very poor shot, for him, and his hitting Bell at all was a scratch. The ball had hit the wall on Bell’s right, caromed, passed through his body, and buried itself in the adobe on his left. There was other proof besides the marks on the wall. The ball had surely been indented and creased before it entered the body, as these scars were filled with flesh. The Kid afterwards told Peter Maxwell that Bell had shot at him twice and just missed him. There is no doubt that this statement is false.

Nowhere in Garrett’s account does he mention two bullet holes at the bottom of the stairs. Yet two bullet holes are prominent on the stair landing today and are identified as being fired by Bonney at Bell. The only problem is that the bullet holes do not match Garrett’s investigation. Quite simply, the holes are in the wrong place to match any version of the escape story.

In the spring 2016 issue of El Palacio, former Lincoln Historic Site ranger Alison Swing wrote a feature article on the historic preservation efforts in Lincoln. The article focused on efforts to preserve the old Murphy-Dolan Store (Lincoln County Courthouse): “The Old Lincoln County Courthouse, the most iconic building in Lincoln—famous for its role in the Lincoln County War as the former Murphy-Dolan Store, for the iconic (and apocryphal) ‘bullet hole in the stairwell,’ and as the site of Billy the Kid’s famous escape—demonstrates how people and their stories, as much as or more than the buildings themselves, are the reason we preserve our special places.”

Recently Ms. Swing received a letter from Julie Davis Carey in response to her article. Ms. Carey is the daughter of Caroline Davis, who was the manager of Lincoln State Monument in the 1950s. Julie wrote: “As to the bullet hole—I know it’s a subject of a lot of rumors and stories, but I have the answer! There was fresh plaster on that wall. Peter Hurd convinced my father (John Davis) that the smooth surface was unauthentic. So my dad shot at the wall and made it authentic. . . . The stories are always more interesting than the fact.”

Every day we chip away at the legends of Billy the Kid and the Lincoln County War. Slowly we discover the true history of that violent era, and are able to separate fact from fiction.

Gary Cozzens recently retired as the manager of Lincoln Historic Site. He plans to spend his retirement searching for Billy the Kid’s croquet mallet.