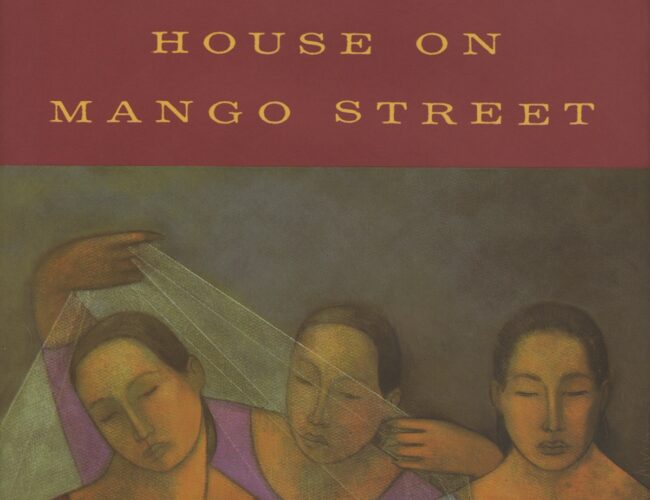 Cover for House on Mango Street.

The House on Mango Street, published in 1984, is a contemporary American classic. You’ll find the American Book Award winner on high school summer reading lists, college syllabi, and stages in the form of a play. It even inspired a traveling art exhibition of the same name, on view at the National Hispanic Cultural Center through September 25.

We often imagine books (and authors) thus venerated to be as remote as Mount Rushmore. So when Mexican American author Sandra Cisneros stood behind a podium at Santa Fe’s Drury Plaza Hotel, looking approachable in quirky red eyeglasses, those of us attending her talk on writing at the UNM Summer Writers’ Conference perked up.

The House on Mango Street, she told us, came out of a class she took at the Iowa Writers’ Workshop. A lecturer used a house as a metaphor for writing, but his description didn’t sound like the houses she grew up in, which brought her to tears. “Why hasn’t anyone written a story that reflects my experience?” The sting of feeling irrelevant led her to write something epic.

We can all relate to the concept of home. I can still count off each of the eleven houses I grew up in, and remember my Grandmother Marie’s cottage, which later burned down, and the little Miami bungalow where my Grandma Migdalia lived with her parrot, lime trees in the backyard. The transience of these dwellings lends a melancholic cast to my memories.

This month’s “Why This?” focuses on dwellings, or rather, Dwellings, by artist Charles Simonds, whose tiny houses began appearing in the nooks and crannies of New York City in 1970. He built the winsome little clay structures by positioning tiny clay bricks with tweezers in the crevices of down-and-out neighborhoods around the world, near or in the ruins of buildings. The charm of imagining wee folk who live in them coexists with the sense that the Dwellings may have been abandoned for hauntingly unknown reasons. They also appear to be built, like much human shelter, amid tenuous circumstances out of grit, optimism, desperation, or a mix of all three.

While many New Mexicans can indeed visit their ancestral homes where great-great-grandmothers once hand-slapped tortillas into shape, the next best thing is to find out more about who those distant ancestors were with the help of “Six Ways to Research Your New Mexico Family History.”

You might even be able to find images of your relatives on the Palace of the Governors’ Photo Archives website, if you’re lucky. One thing’s for sure: you’ll be able to look at other people’s longlost relatives. The family photos of countless New Mexicans make up a good portion of the (ball park: one million) photographic objects that await classification and digitization at the archives, the focus of “Dates with History.”

Just as houses are called home by different families over decades and sometimes centuries, buildings also take on wildly different purposes. At the conference, the Drury’s history was quite present. Faculty member and poet Valerie Martinez was born on the site, back when it was a hospital. Before that it was an orphanage, and once before, a hospital that burned down. More recently, it housed offices for the Department of Cultural Affairs. Considering the volume of overheard eerie occurrences that took place there, it would have been quite convenient if the conference offered a class focused on how to write a good ghost story. (Step one: check into the Drury.)

One way to dispel the sadness of impermanence is to make art (whatever that means to you) that will outlive us all. As Cisneros exhorted, “Write the story only you can tell. Save a house on fire and all the people in it.”