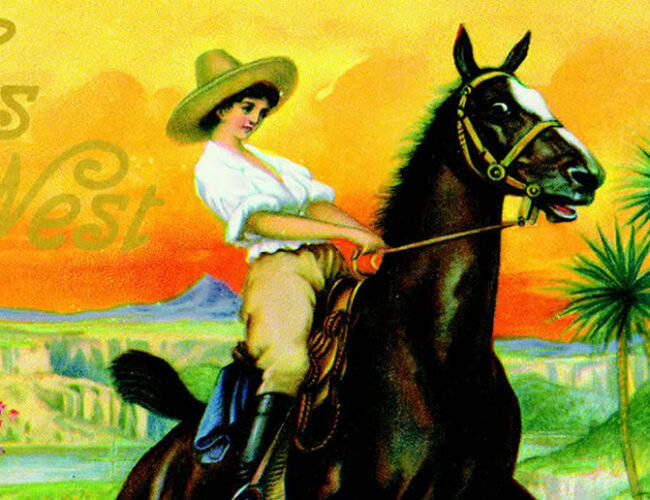 Miss West, Klingenberg Printers, late 1930s. A technicolor desert is the setting for a feminine version of riding off into the sunset.

Somewhere between “What this country needs is a really good five-cent cigar” and the surgeon general’s warning that “Tobacco smoke increases the risk of lung cancer and heart disease” lies a story that encompasses the growth of popular culture, advertising and marketing, commercial and fine art, and globalization—all brought to you through the invention and mastery of lithographic printing.

But before I go on I must point out that the New Mexico History Museum does not advocate smoking or the use of tobacco products of any kind. No matter how attractive depictions of smoking may appear, smoking can kill you. Furthermore, I have no personal interest in promoting cigar smoking. In fact, the last time I smoked a cigar was forty years ago, when my first son was born, and I passed out cigars to my coworkers in the pressroom of a lithographic printing company. And that’s where my experience as a printer and my role as a curator of history come together.

In the nineteenth and early twentieth centuries, skilled artists and craftsmen produced colorful, exotic, and sometimes provocative cigar-box designs. While we may view them today as quaint examples of Americana, at the time of their creation cigar-box art brought glimpses of the wider world to America, and also introduced American values, customs, and icons to countries around the globe. To this day, we keep them for sentimental reasons and fill them with our memories and treasures.

You might not realize it, but if you are reading a print version of this magazine, you are holding a lithograph in your hands. This magazine, and probably 99.9 percent of all the printed matter you’ve ever come across, was printed by lithography. Invented in Germany just before 1800, a lithograph is distinct from any form of print that came before. Alois Senefelder, the inventor, was an unemployed playwright looking for a less expensive way to publish his work. At the risk of oversimplifying what has become a highly evolved technology, lithography is based on the premise that oil and water don’t mix. Litho means “stone,” and graph means “drawn.” Most of the labels in our exhibition, Out of the Box: The Art of the Cigar, were made using the following process.

An image is first drawn on a surface of smooth limestone with an oil-based crayon. The lithographer then wipes the stone with water, but the water is repelled by the oily crayon and stays in the non-drawn areas of the stone. Next, oil-based ink is rolled across the entire surface of the stone, but the ink clings only to the oily drawing and not the dampened areas. When paper is laid on the stone and run through a press, the drawing is transformed into a print. When a print has multiple colors, it is called a chromolithograph, and some of those in the exhibition took impressions from ten or more stones to build a final image. This laborious technique is still used by contemporary art studios, but modern, high-speed commercial lithography has replaced the stones with metal plates on revolving cylinders, and images formerly drawn by hand are now transferred photographically.

The artistry exhibited on cigar labels is undeniable. By virtue of draftsmanship, the use of color, and imagination, some label designs merit consideration as true works of art. Although appreciated by the masses, commercially made chromolithographs were dismissed as “cheap chromos” by the art elite, who insisted on a distinction between commercial and fine art. Among New Mexico artists who were later praised as fine artists, Oscar Berninghaus, Walter Ufer, and Joseph Imhoff received training in lithographic workshops, while John Sloan, Ernest Blumenschein, Buck Dunton, Joseph Henry Sharp, Martin Hennings, and Gustave Baumann all escaped the anonymity of a career in commercial art.

At the end of 2012, Dr. Loy Glenn Westfall donated an eye-popping collection of western-themed cigar-box labels to the New Mexico History Museum. Westfall was the archivist for Klingenberg Printers in Germany, where he became familiar with the kaleidoscopic world of cigar-label art. Initially charmed by artistic and romantic images of Cuba, he completed his dissertation on nineteenth-century Cuban émigré communities and their establishment of the cigar industry in the United States. His collection has grown to include dozens of themes. Wishing to keep certain labels together, he determined that the History Museum, with its existing interest in the American West, printing history, and good storytelling, would be a suitable home for his western collection.

The collection includes labels shown in various states of production. Some still bear the register marks and color bars printers use in bringing the work to a final state, and others reveal lithographers’ fingerprints and penciled notations. Many of these labels are extremely rare or are the only known examples of a particular print.

Adventure and the promise of romance may have had as much to do with westward migration as the famous admonition to “Go West, young man.” Interpret them how you will, boy-dreams-of-girl, boy-meetsgirl, and girl-gets-away scenes have been colorfully expressed on cigar boxes, and western romance is one of the most popular of all the categories that cigar manufacturers created to entice smokers to their brands.

Around the world, “cowboys and Indians” are synonymous with the American West, and themes portraying both are plentiful on cigar labels. Wild West cigar labels are a classic form of advertising Americana. They also spread to Europe, where lithographic companies in Germany, the Netherlands, France, and Belgium promoted western imagery from the 1880s through the mid-twentieth century. Ever since the European colonization of America, tobacco has been linked to Native American culture. Early prints of Jamestown settlers trading for Indian tobacco, cigar-store Indians, peace pipes, and even a certain modern cigarette brand perpetuate the strange stereotype that all Indians smoke. And stereotype—originally a printing term—refers to a printing plate that has been cast from a mold. But the more familiar use of the word means reducing a specific group to a handful of easily recognized traits. In this latter sense, some cringingly anachronistic ideas were displayed on cigar labels. One in particular features a feather bedecked “chief” standing in a canoe in a pose reminiscent of Washington crossing the Delaware.

The practice of product endorsement by celebrities has its roots in cigar-label art of the nineteenth century. Cigar boxes became virtual portrait galleries for the faces of famous, historic, and cultural individuals. Lights of the literary firmament are represented in our exhibit by Shakespeare, Cervantes, Walt Whitman, and Mark Twain. The Solitario-brand label shows Twain musing on the deck of a ship and quotes him as saying, “Be good and you will be lonesome.” Silent-screen stars Tom Mix and Eddie Polo also get face time. (It’s okay, I had never heard of Eddie Polo either, but thanks to cigar box–as–history lessons I have been informed.)

Highbrow or lowbrow, cigars were marketed to all classes and levels of society. But Victorian modesty was no match for marketers who looked for new ways to increase sales. Two of the most enduring principles of advertising were discovered in this period: color sells and sex sells. Some eyebrow-raising designs were definitely not to be seen in “proper” society or mixed company. Partially clad figures, both male and female, were placed in scenes that ranged from the quaint to the provocative.

Appeals to patriotism profit cigar makers and politicians alike. Especially at the beginning of the twentieth century, cigars were associated with the rich and powerful, inspiring images of political power brokers hashing out deals in smoke-filled rooms. It was Woodrow Wilson’s vice president, Thomas R. Marshall, who quipped the famous phrase, “What this country needs is a really good five-cent cigar.”

In the presidential election of 1908, Republican candidates William Howard Taft and James S. Sherman were pitted against Democrats William Jennings Bryan and John W. Kern. Cigar makers produced labels favoring both sides, creating artwork that allowed for photos of the candidates to be placed interchangeably in ornate frames. The Republicans won the election. And while we can’t say that advertising had anything to do with the outcome, a tumultuous campaign must have been as profitable for the cigar company as it was for today’s media brokers. With presidential politics on everyone’s mind, our exhibition couldn’t be timelier. On the day it opened, President Obama announced the lifting of the restriction against importing Cuban cigars into the United States.

The exhibition closes with the question, “What’s inside your cigar box?” Intimate in size and displaying a peacock palette of color and gilt—exotic, provocative, or patriotic—cigar boxes have charmed and fascinated us for well over a century. I wonder how many future donations will come to our museum in cigar boxes.

Thomas Leech is the nonsmoking director and curator of the Press at the Palace of the Governors.

Out of the Box: The Art of the Cigar showcases the rich breadth of artwork created during the golden age of cigar-box labels. It is on exhibit in the Mezzanine Gallery at the New Mexico History Museum through October 2017.