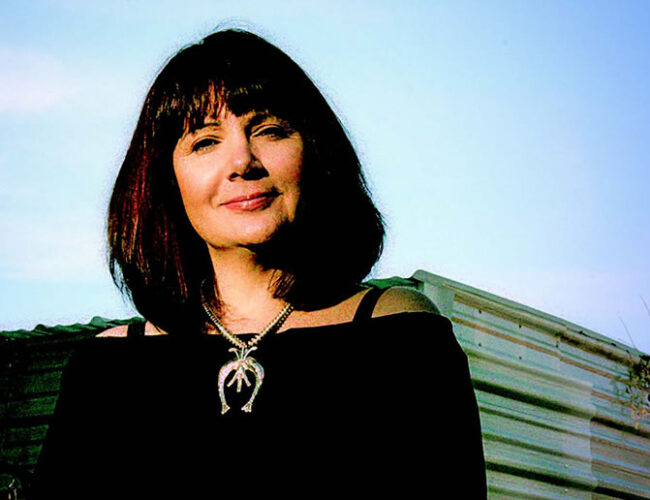 JODY NARANJO, forty-eight, an eighth-generation Pueblo potter from Santa Clara Pueblo, is the 2017 Museum of Indian Arts and Culture Living Treasure and Native Treasures Featured Artist. This profound honor puts a bow on what is already a shining reputation; Naranjo won Indian Market’s first prize in pottery in 2011, was an artist in residence at the Eiteljorg Museum of American Indians and Western Art in Indianapolis, and is one of the most soughtafter artists at Santa Fe Indian Market, where people camp out to get first crack at her booth’s contents (her pottery reliably sells out early). MIAC presents a special exhibition opening April 1, Revealing Joy: Jody Naranjo, which will include her art from its collections as well as pieces on loan.

Native Treasures Indian Arts Festival (May 26–28) has become one of the important Indian art shows in the country since its inception in 2005. More than two hundred museum quality artists from over forty tribes and pueblos will showcase and sell their pottery, jewelry, glass, painting, sculpture, carvings, textiles, and other art. Artists generously donate a portion of their sales to the museum; proceeds from Native Treasures provide the primary funding for annual changing exhibitions at MIAC.

Honoring rich Pueblo traditions handed down through her Tewa family, Naranjo carves her pots with images of pueblos, people, and animals in an animated, contemporary manner that appeals to a broad audience. During a recent visit, sculptor Andrew John Cecil sat with Naranjo at her kitchen table in Albuquerque, and amid much laughter, they spoke about her journey as a potter who embraces traditional practices while exploring contemporary themes and collaborative opportunities.

Andrew John Cecil: Is there a lot of clay talk with your family and other potters?

Jody Naranjo: Yes, if we find a good new source for clay, or . . . [whispers], “Oh, check this out. This work is good.” You can always tell a potter by their hands. I definitely have those. Strong hands, from carving. Other potters and I sit and compare our hands at shows . . . “Come on. Look at this one. Look at these calluses, look at this weird muscle I’ve got here.”

Cecil: Where and how do you make your pots?

Naranjo: I work here, at the house. It’s easier, because I have always had children [three daughters: Jade, Coral, and Jett], so this is where I work. I make my own clay. I don’t use the wheel, I use the coil method. Once the pot is dry, I sand it down with sandpaper to finish the shape, and make it real smooth. I polish the pots with a stone, or I can leave them plain. I fire with cow manure which makes the surface of the pot dark. I carve into the surface with an X-ACTO knife, and I etch the background lightly with a knife. Then I carve the images more deeply. I paint into the cutaway design with a silver mica color I mix with an acrylic sealer.

Cecil: The scale of your pottery is very manageable. It’s a very human scale.

Naranjo: This is my comfort scale. I can go big, but I don’t enjoy it. It takes forever to carve a design in a big pot; they tend to not be so symmetrical. When I fire the bigger ones, I go home to Santa Clara to do it. In Albuquerque, where I live, I don’t have the place to fire the pots. I can go to friends’ houses that live right outside the city limit, and fire some smaller ones there. When the pots are being fired, I sit on the couch under my bright light next to the fireplace and carve; I’ll be in my pajamas, working [laughs]. I have all my carving tools and my paints here in the front room. When it’s warm, I work outside on the porch a lot. I can’t draw, but once I get on that pot with a knife, and cut into the surface, my lines are real straight. Thirty years of that heavy, heavy carving . . . it’s not rocket science. It’s not an exciting career. I sit here, carve pottery, watch TV, and hang out with my dog.

Cecil: Many of your images on the pots are about family.

Naranjo: My kids would say, “What are you making now, Mom?” I always had a child next to me; I would make these clay sculptures. I’d make a seed pot, just a round ball, with a hole. Then I’d make another little ball. I’d roll out coils and  I’d make feet and arms, like Mr. Potato Head. I’d say, “Put it together, and make a person out of it, or an animal.” They would, and I’d finish them up. My daughters carried them around in their blankets.

Collectors would come look at my pottery and they’d say, “I like that deer, I like that horse.” The kids would look at me, like, “No! No, Mom!”

There was one animal that sat facing the TV. His name was Benny the Antelope, and one of my collectors wanted him really badly. I said, “He’s not for sale.” She wanted Benny, and the kids were sitting there staring at me.

She went home with Benny the Antelope. The kids were just devastated, but we have pictures of Benny in my workroom, and he sends us letters twice a year. Now he’s Baltimore Benny. It’s cute. Those little animals, they become companions. People have always told me, “You should make a children’s book with your animals.” I wouldn’t mind doing that down the road.

We had a whole house of animals, and some got pretty big. That was probably in the mid-nineties. I was showing at Gallery 10 in Phoenix. The gallery people came to the house and said, “Wow, those are cool!” I thought, “Really? These are just fun things I make for the kids.”

Gallery 10 started carrying the clay animals, and that went really well. When it closed down, I stopped making them. I would just make animals for the people who liked them. Five years ago, Leroy Garcia of Blue Rain Gallery asked, “Aren’t you making those little animals?” I said, “Oh, I don’t have time.” Leroy proposed that we cast the animals in bronze. I said okay and made some of the little animals, and sure enough, the people liked them.

Cecil: You have a strong connection with images of humans, animals, and place—landscape, churches, and pueblos.

Naranjo: All the pueblos have churches. I love the architecture, the history. My grandfather was a Baptist minister, and he built a church. I’ll drive around and take pictures of the churches and then put them in my designs. I enjoy putting pueblo churches on the pots. I like the landscapes, and I like to play on the comical side, with caricatures of the Southwest. I like happy art that makes me smile. I know there’s a place for all kinds of art, and I appreciate that. Personally, I prefer something that’s going to make me happy.

Cecil: Another direction that you’ve taken is working with companies that are manufacturing your designs.

Naranjo: Yes, isn’t that fun? I thought about Pendleton years back, thinking it would be cool to collaborate with them, so when they contacted me about collaborating on a blanket design, I was like, “Yay!” SWAIA [Southwestern Association for Indian Arts] asked me to design the Lifetime Achievement Award for Pueblo potters, almost three or four years ago. Bruce Bernstein, the director, called me up and said, “Jody, would you like to make the Lifetime Achievement Award this year?” He said, “But I need you to make something traditional.” I said, “Well then, why are you calling me? Call somebody else who does traditional pottery!” Bruce said, “Because if I tell you ‘traditional,’ it will be somewhere in the middle.”

Cecil: Is your use of contemporary materials and processes being accepted?

Naranjo: Only in the last five years. I know a lot of people were able to do it before. Maybe it is because of this younger generation coming up that’s been pushing the traditional boundaries. Hey, if they can do it, why can’t I play a little bit too? Why not? Acrylic paint is fun. It’s color! When I worked with [Tlingit glass artist] Preston Singletary, I traveled to his glass studio in Seattle. Right after I arrived he said, “Let’s get to it. Let’s start right away. Did you bring some sketches?” He wanted big sketches. He put them on the wall. He asked, “What colors do you want?” I said, “Uh, brown? Tan?” We did two in brown and tan. He asked, “Okay, now what color?” I said, “Red? How about a little red? Maybe like a gray?” Preston said, “Come on, Jody. This is boring.” I said, “Well, what colors do you have?” Preston took me in this room with many colors of glass. Wow! At the end of the day I was choosing turquoise, and purple . . . and he said, “Okay, settle down a little bit.”

Cecil: How is New Mexico’s diverse art community reaching out to the Americas, and the world? Especially with the advent of the Internet, your images can be sent across the world today for somebody to view in Hong Kong, Tokyo, or Berlin. How does that affect your worldview?

Naranjo: I see that a lot of designs that we think of as a Native design, like the spiral, are multicultural. There are a lot of techniques, designs, and materials that are similar across the world. Many are prehistoric. People all over the world will see the same design and connect it with something else that they’ve seen. It doesn’t have to be specifically from the Southwest. It could be from Egypt. Peruvian pottery looks so much like our pottery. Before, I’d have to do a lot of research at museums or libraries. Now, you can pull up anything. It’s so much easier to connect and interact with other communities and cultures, and compare or exchange designs and ideas. It’s also interesting to compare and connect with other people from other cultures and places. I did a class with women potters from South Africa. They shared about how their religious beliefs are a part of making the pottery. They couldn’t touch clay when they were menstruating, because it is considered unholy. Another lady told me that she used breast milk to polish with. Wow! I thought we were really getting into pottery over here, but some of these other cultures push it to a whole other level.

Cecil: Do you look forward to more travel?

Naranjo: Not particularly, no. I’ve lived out of a suitcase already. I like being home, making my pots. There are places I would like to see eventually, but right now I’m pretty happy right here in my little home.

Andrew John Cecil is guest curator for Jody Naranjo: Revealing Joy, at the Museum of Indian Arts and Culture. His work as sculptor has been exhibited nationally and internationally. He divides his time between Santa Fe and his sculpture studio in Roswell, New Mexico.