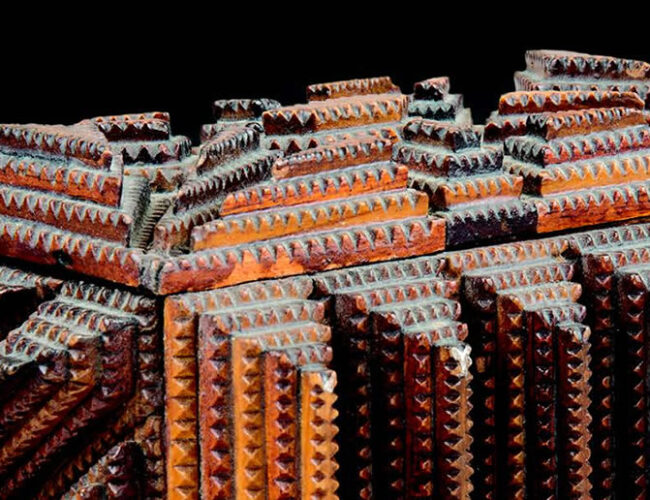 SOME PEOPLE CONSIDER tramp art one of the homeliest dust-gatherers that the human mind and hand have concocted,” Michael Cornish noted in a 1993 essay titled “Tramp Art: A Personal Appreciation.” Even the name sets a low bar, implying that these carved objects, made primarily from discarded cigar boxes and food crates, were made by hobos or tramps, poor itinerants who rode the rails in search of a day’s work, a square meal, and a warm place to sleep.

However, for the most part, tramp art was not an itinerant art form—it was made by family men with settled home lives. Signed tramp art pieces and anecdotal evidence demonstrate that it was a working class pursuit characterized by pragmatism and thrift. And yet the name has stuck, and misconceptions persist.

Tramp art’s heyday spanned the 1870s through the 1930s in the United States and parts of Europe. In the United States, it was fueled by the Internal Revenue Act of 1864, which required that cigars be distributed in wooden boxes that would be stamped with the cigar factory and district numbers and the name of the state, in order to verify that taxes on the cigars had been paid. Because tax stamps could not be reused, boxes were not recycled, providing an ample supply of raw tramp art material. Artisans dismantled the cigar boxes, notched the edges of the thin pieces of wood (typically cedar or mahogany) with a penknife, then layered the pieces of wood in incrementally smaller sizes. They primarily made boxes and frames, as well as a wide range of other objects for the home, from wall pockets, clock cases, lamps, and various pieces of furniture to more esoteric examples such as toys and banks, satchels, a thermometer casing, and a toothpick dispenser.

No Idle Hands: The Myths & Meanings of Tramp Art, an exhibition on view at the Museum of International Folk Art from March 12, 2017, through September 16, 2018, centers on the ingenuity and creativity of artists who made remarkable objects with the simplest of tools (a knife), the most basic of raw materials (discarded wood), and the most fundamental of techniques (V-notch carving). This first full-scale museum exhibition of tramp art since 1975 showcases more than 150 examples of this art form. The exhibition focuses on historic examples from the decades around the turn of the twentieth century, but it also includes contemporary works by five makers who bring their own innovations to tramp art. Primarily from the United States, a selection of objects from Canada, France, Germany, Mexico, Brazil, and elsewhere illustrate the vast reach of this woodworking practice.

The Museum of International Folk Art recently acquired a sizable collection of tramp art from Eric Zafran, a retired curator of European art whose personal collecting concentrated on folk art. This gift served as the catalyst to produce No Idle Hands, which was long overdue, and its accompanying publication of the same name (Museum of New Mexico Press, 2017). Both endeavor to set the record straight about tramp art—what it is, who made it, and how this technique was learned. No Idle Hands aims to prove tramp art’s naysayers wrong by demonstrating that these objects are not only aesthetically remarkable, but also fascinating examples of how the handmade retained its enduring appeal in a time of continuing industrialization. The selection proves that tramp art is extraordinarily complex, labor-intensive, and beautiful.

TRAMP ART’S EARLY makers and appreciators lived in a time when people scorned idleness. The biblical aphorism “Idle hands are the devil’s workshop” established work as a moral duty. Idleness, in contrast, led to “all forms of calamity . . . poverty, despair, and vice,” according to historian David Raymond, writing on the nineteenth-century American work ethic. This work ethic deemed industriousness as essential to individual and national, economic, and spiritual well-being.

The ideology was particularly potent in the first half of the nineteenth century, an era of transformation when the United States shifted from a system of independent farmers and artisans to machine labor in factories. And it is a framework that continued into the late nineteenth and early twentieth centuries as industrialization accelerated, immigration increased, and consumerism—and uncertainties about society’s transformations—rose. Amid this backdrop, the home was central as a haven, and it is both significant and symbolic that the detritus of industry—in this case cigar boxes—provided the raw material for a hobby that beautified the home with useful objects.

One painted frame in the exhibition and book was carved with S-curves that create a dynamic surface. Much tramp art is fairly rectilinear in the alignment of the notches and layers, but this particular frame shows great artistry in its departure from the rigidity of the right angle. Henry J. Bolieau (1881– 1972) was an expert carver but made just two tramp works in his lifetime, including a straightforward notched frame to surround 98 examples of his true carving passion: peach pits sculpted in the form of crosses, hearts, baskets, monkeys, chalices, and shields, then encrusted with rhinestones. Conrad Neuwirth (1843–1930), on the other hand, created at least 101 exquisitely notched boxes. We know this because he had enough pride in his craftsmanship that he signed, dated, and numbered each of them. Originally from Württemberg, Germany, Neuwirth immigrated to the United States in 1866 and settled in Rochester, New York. He worked primarily as a mason, and he and his wife, Catherine, had eight children. It is unknown where he learned woodcarving and from whom—perhaps he was self-taught—but we do know that tramp art was something he picked up in his later years.

A piece such as Henry Patrick Nugent’s enigmatic carving can only inspire wonder at the intensity of labor he must have put into it, the quantity and perfect regularity of the notches, the variety of carved patterns, the overall harmonious symmetry, and its unexpected architecture. It seems to be a piece of furniture, yet has no evident function, for its table surface is obstructed by a box. There are three boxes in all, one of them accessed by a “secret” swiveling stem; yet why would three smallish boxes require a structure that rises some four feet high? What purpose did it serve, particularly the hidden, gold-painted compartment? It is a work of serious intent, yet is such an uncanny entity that you can’t avoid marveling and also chuckling at it.

Much tramp art shows us where its maker’s loyalties and sentiments lay. Whether it was an expression of love, national pride, religious devotion, or fraternal camaraderie, it often showed its maker’s affiliations with people, society, or a belief system. An exquisite jewelry box made in 1888 for a Mary J. Gerard—her biography has been lost to time—shows a variety of carved motifs, such as rosettes, chain links, braids, and, of course, the notched edges of tramp art carving, all of which surround a central carved-wood rose. The pink satin interior with ivory ribbons attests to the sentimental value of this object, presumably a gift made for and given to Gerard, as her name and the date are carved directly onto the box. A notched-rosette case enshrines it, seemingly made by the same hands that created the box itself.

The numerous crosses and crucifixes that can be found confirm the artisans’ piety. A large, gold-painted home altar housing a Virgin Mary plaster figure, now in the collection of the Museum of International Folk Art, once occupied the back room of a family-owned hardware store in Saint Isidore, Ontario, Canada, where the family members prayed. The story passed down with the shrine is that the family commissioned it in the 1950s from an Ottawa artist. This piece is currently being restored by Museum of New Mexico conservation intern Sophie Hunter for No Idle Hands. As portions of the altar have been dismantled as part of the conservation process, the make-do ethos of the tramp artisan has been revealed. A container of Red Ribbon hair pins from the T. Eaton Co. department store was pressed into service to elevate the Virgin Mary statuette to the proper height. The gold-colored “radiator” paint—a term used for a type of brass-based paint that emulates the look of gold—now glows a richer hue after Hunter removed oxidation from the paint surface.

An impressive clock case made in Welland, Ontario, Canada, in 1935 commemorates the reign of King George V. Carved maple leaves, Tudor roses, and Union Jacks embellish the surface, and cast animals from the British colonies stand as trophies to King George V’s vast dominion, reminding us that the “golden age” of tramp art coincided with the age of imperialism. In creating this clock case, the artisan was articulating his sense of affiliation with Canada and the greater British Empire. The clock would have been the focal point of a home, and served as a domestic monument to empire. Any art form that utilizes found objects or recycles used material breathes new life into the old. Folk artists have long used whatever materials are at hand to articulate cultural traditions and their individual variants upon those traditions—most often for reasons of availability and economics. Artists who work in the tramp art style today are less motivated by a need for a particular household object and less guided by economics in their choice of materials. Rather, for a maker such as George Hightower, creating tramp art began as a way of understanding a frame made by his great-grandfather and passed through the family over the years. He opts for walnut scraps, rather than cigar-box cedar or mahogany, but takes inspiration from the tramp art of yesteryear.

Freeland Tanner, a Napa-based artist, has childhood memories of a neighbor carving tramp art—what he knew then as “facetwork”—and his grandmother whittling on the front porch. He didn’t pick up tramp art until decades later, after purchasing a small tramp art frame at an antique store and recreating the notching and layering technique to produce his own works that hybridize tramp art with a variety of styles across the spectrum, from Black Forest to rococo to New Mexico Hispano tinwork.

Laura Addison is the curator of European and American folk art collections at the Museum of International Folk Art, and the editor of No Idle Hands: The Myths & Meanings of Tramp Art (Museum of New Mexico Press).