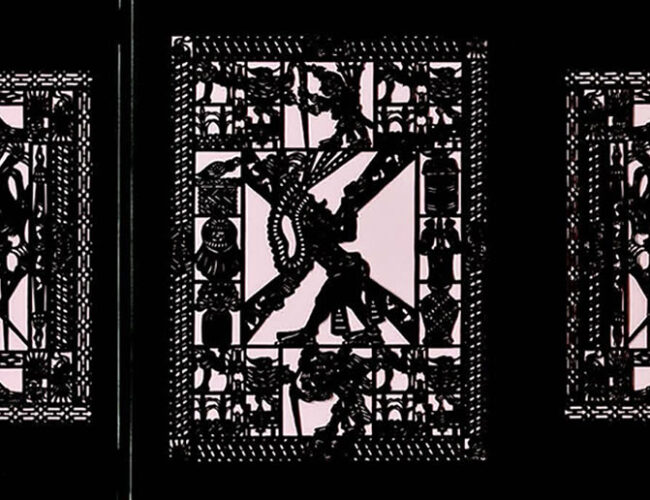 I have watched as visitors to the Museum of International Folk Art stop in their tracks before a wall of cut-paper silhouettes, intrigued and perplexed. Perhaps they are recalling the snowflakes they made in grade school by folding and snipping paper in simple patterns. They recognize that this is something else, not only in the complexity of design, but also in the content of the imagery.

Catalina Delgado Trunk has elevated cut paper to an art form, drawing the viewer into her intellectual depths. A 2015 recipient of a Governor’s Award for Excellence in the Arts, Trunk lives in Albuquerque but was born and raised in Mexico City, and traces her lineage to the indigenous Nahuatl and Colhua peoples. She first learned paper cutting in kindergarten but only returned to it after a midlife crisis. After marrying an American, she made her life in the United States until a feeling of displacement temporarily drew her back to Mexico. “I lived between two worlds,” she says of her life in the United States. Returning temporarily to her homeland, she rediscovered the medium she had loved as a child.

In Mexico, papel picado, as the technique is termed, is a living tradition, primarily associated with the celebration of the Day of the Dead, when paper decorations adorn family altars. A dedicated historian, Trunk locates its origins in preColumbian figures cut out of bark by shamans and traces its evolution through the Manila trade, in which Spanish galleons brought goods protected with tissue-paper wrapping from China to Mexico for shipment to Spain.

Past and present converge in her 8-by-6-foot composition of nine framed pictures, created in 2009 for the opening of the Hispanic Heritage Wing at MOIFA. This was the only work commissioned for the new wing, where it still occupies an entire wall at the entrance. Its title, Terpsichore and the Pochtecas, invokes the Greek muse of dance and, as MOIFA curator Nicolasa Chávez explained to me, the confluence of passions between the artist and herself. Since Chávez is a flamenco dancer, and the artist’s first career was as a teacher of classical ballet, images of dancers became a way to explain the complex culture they both sought to define.

As you stare at the patterns of black paper against the pale museum wall, participants in an elaborate performance begin to emerge. Chávez shared her notes on their deeper meaning. You can easily spot the flamenco dancer at the upper left. She represents Spain, but, as a Gypsy, her lineage is mixed. The tango couple on the lower left represent South America, where African influence blends with indigenous and Spanish influences. New Mexicans who have witnessed a Matachines dance at a Native pueblo may be able to identify the head at the upper right as a participant in the only dance shared by Hispanic and Pueblo peoples. An aficionado of Mexican folk dance would recognize the elegant young woman who bows at the lower right. A china poblana, her costume comes from the Manila galleon trade with Asia. If you focus on each of these pictures’ borders, you can pick out crosses that represent the Catholic religion brought to the New World, and navigational instruments necessary to the ocean crossing.

At the center of the work, Trunk has posited the figure of the patron deity of traders, the pochtecas of the title. This figure and the panels above, below, and beside it are pre-Columbian, drawn from the artist’s study of archaeology in search of her own ethnic roots. The Mejicas (more commonly known as Aztecs) traded in the far reaches of their empire and beyond. Around the pochtecas are dancers with coyote masks representing a second deity who guided the merchants on their journeys. Each coyote figure is bordered with images of feet, walking the trader’s route, as well as products that he carried. The panels are arranged in the pattern of a cross to symbolize the Catholic Church, which would dominate the subsequent empire of New Spain.

The dancers in this masterfully choreographed ballet illustrate the synthesis that has evolved over centuries to characterize the Hispanic New World. Catalina Delgado Trunk has created a metaphor of profound meaning from the oldest of techniques, in the most fragile of materials, to fulfill her personal definition of folk art as “an expression of identity.”