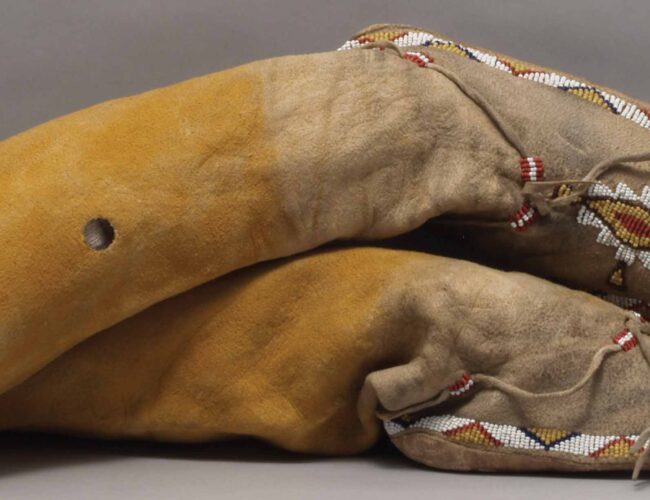 Of the hundreds of peoples that lived and flourished in native North America, few have been so consistently misrepresented as the Apacheans of Arizona and New Mexico,” anthropologist and Apache culturist Keith H. Basso wrote in his essay “Western Apache” in the Handbook of North American Indians published in 1978. “Glorified by novelists, sensationalized by historians, and distorted beyond credulity by commercial film makers, the popular image of ‘the Apache’…is almost entirely a product of irresponsible caricature and exaggeration.”

This knowledge gap challenged Museum of Indian Arts and Culture Education Director Joyce Begay-Foss (Diné) to curate Lifeways of the Southern Athabaskans, opening at MIAC December 10. “The general public—even some Natives—doesn’t understand,” says Begay-Foss. The exhibition encompasses over one hundred objects made and used by Apachean groups in New Mexico and Arizona, including Chiricahua, Jicarilla, Mescalero, San Carlos, and White Mountain, dating from the 1880s to the 1960s. “This story needed to be told,” Begay-Foss says. “These objects have never been exhibited as a group.” Begay-Foss notes that the exhibition’s basketry, beaded clothing, parfleche, hunting and horse gear, and photographs are more than objects—they are proof of Apachean ingenuity, resilience, and tenacity.

In 1826, Albert Gallatin, founding member of the American Ethnological Society, arbitrarily bestowed the name Athabaska on a group of related indigenous people from western Canada in the environs of Lake Athabasca, which straddles the northern corners of Saskatchewan and Alberta. This term, which evolved in the early 1800s from the apt, Cree-tongued aðapaskāw, means, loosely: “where there are plants one after another.” Linguists today classify the Athabaskan people into three geographic subfamilies—Northern, Pacific Coast, and Southern. Anthropologists assert that these linguistically and culturally related peoples are ancestors of those who relocated from western Canada in the late 1300s and 1400s.

While Begay-Foss endeavors to correct some notions about Southern Athabaskan people through exhibits on language, homeland territory, cultural identity, mobility, traditional beliefs, horse culture, technology, and trade, she has avoided addressing the outdated but enduring stereotype of the Apache as a particularly savage people.

“We interpret their lives through language and lifeways. Putting aside what history books say about violence, I’m focusing on Apachean material culture—what these hunter-gatherers needed to survive, how they used land and its resources, how they felt about their people and animals.”

In her research, she went beyond academic texts and their limitations, seeking counsel from tribal representatives, whose people today, according to Begay-Foss, number as follows: 3,511 Mescalero; 4,038 San Carlos; 2,755 Jicarilla; 12,249 White Mountain (Western); and 650 Fort Sill (Chiricahua) in Oklahoma. In her consultations, for example, she’s learned that two dolls, misidentified as Mescalero, are Jicarilla. “Ours is an oral history,” Begay-Foss says. “We need our own people to tell our story.”

Organized by topic, the exhibition opens by focusing on distinct tribal homelands and language. Many linguists and anthropologists have contributed to the research that examines relationships in the tonal Athabaskan language family. Summarizing, Robert W. Young, former professor emeritus of linguistics at the University of New Mexico, writes in his essay “Apachean Languages,” also in the Handbook of North American Indians,that Apachean languages “diverge from one another to varying degrees in details of phonology, morphology, and structure, but basically they share a common pattern … [in fact,] a range of shared lexical cognates at 90–97 percent.” For instance, while -t’a’ is the predominant way to represent feather among all Apachean languages, dog varies slightly among Chiricahua (kéjaa), San Carlos (łiichaayáné), and Jicarilla (łi’chaa’á).

Apache translations accompany some early objects, including a beaded Chiricahua quiver, donated by the family of Sergeant William Minser, 3rd United States Infantry Regiment, stationed at Fort Stanton, New Mexico, who in 1886 accepted it from a surrendering follower in Chiricahua leader Geronimo’s band. According to the donor, upon acquisition, the quiver bore Geronimo’s name in purple berry juice, though it’s no longer visible. Visitors can also examine language through video and audio. The Education Room features videos of interviews with tribal members, including a Jicarilla basket weaver, speaking in her language with English subtitles.

Portability was a critical characteristic of any Apache object, including their carrying vessels, which were generally woven, and therefore lighter than clay. An 1890s/early-1900s Mescalero burden basket, measuring two feet tall—used to carry belongings, corn, wood, nuts, and berries or other fruit—is made with sumac and yucca leaves; an 1895 Western Apache tus (water jar) is twined with mesquite bark and sprigs of willow and cottonwood, and protected with piñon pitch (resin) inside and out, whereas the Jicarilla wove in coils and pitched the inside only.

The bow (sometimes backed with sinew to increase spring) and arrow were made of hardwoods, such as mulberry, and banded in variable hues of ochre or vegetal paint to differentiate ownership. The exhibition features a Jicarilla bow, sporting a trade-garnered metal tip and turkey-feather fletchings, designed to aid in straighter shooting. The Apache hunted mule and white-tailed deer, elk, and buffalo, as well as small game, such as rabbits.

The dog was the Apaches’ pack animal and pulled a travois (sled) before the Spanish introduced the life-changing horse, increasing opportunities for travel, trade, and influential cultural encounters. Dated pre-1935, a pair of Chiricahua cowhide horseshoes protected front hooves and obscured tracks. Evidence of the Apaches’ appreciation for horses and dogs surfaces in their likenesses woven into vessels, but they used other common motifs, too. Begay-Foss says, “They honored the elements that helped them survive through their woven designs, showing their connections to land and sky through patterns.”

Beyond the larger goals of the exhibition, as MIAC’s education director, Begay-Foss looks forward to conversations with students, whose candid questions give her opportunities to share more about the Southern Athabaskan culture. Why is this arrow band red and that one yellow? How did they make colors? How do you tan a hide? Could they wear the capes whenever they felt like it? Did the babies like being carried in cradleboards? Did they get to sleep with their dolls?

“To really understand the Apache people, we need to examine their material culture and grasp how they survived—with the weather, the conflict, the resources. This is where the stories are.”

Cullen Arlington Curtiss, a freelance writer with New England roots, lives in Santa Fe. When she’s not writing, she’s outside with her family and friends.