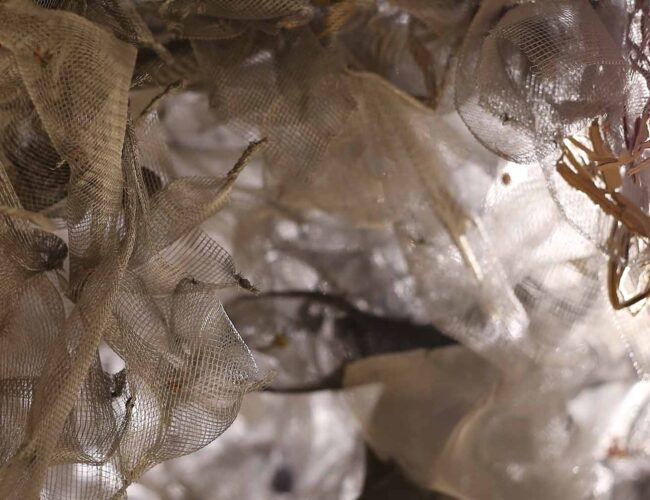 Appropriation, cultural intellectual property rights, activist art that addresses war and violence, the criteria for what counts as Native art, issues of indigenous authorship and authenticity . . . the list is long and complex. These questions—central to indigenous arts and artists—are increasingly entering public discourse. These polarizing topics tie into larger issues of privilege and politics that make it tempting to throw one’s hands in the air and walk away in frustration. However, the stakes are high; the questions are more than worthy of deeper consideration and reflection. And so, El Palacio asked us to explore these conversations in a four-part series.

In this article series, our approach will not be proscriptive. We will reveal what this level of navigation looks like on the ground at our museums: the Museum of Indian Arts and Culture and the Museum of International Folk Art. Throughout the series, indigenous artists from across the Americas will share their perspectives.

In our directorial and curatorial roles, we must continually be mindful of the ways our cultural institutions’ exhibitions and collecting practices can either highlight or silence variations in traditional arts and the issues facing communities that produce the works we display. If we don’t attend to issues of copyright and intellectual property, our museums can unwittingly undercut the very communities that we strive to serve by competing with living artists. If we are not mindful of the power dynamics involved in determining who has the authority and right to “tell the story,” then we place ourselves at risk for repeating paternalistic patterns of earlier generations. Shying away from displaying art that critically engages with contemporary political and social issues distances museums from living communities and reinforces the damaging image of timelessness that burdens indigenous people.

In the first half of the year, we will be exploring indigenous art and activism: works that respond to contemporary social and political issues while challenging the materials, methods, and symbols that have bracketed traditional arts. The issues that indigenous communities face affect all of us. So rather than focusing on what can seem to be insurmountable problems, we frame these works as interventions and as models for thinking about how art can draw communities together and strengthen responses to the challenges we face globally.

In the Spring 2018 issue, we’ll present a conversation with Peruvian artist Edilberto Jiménez Quispe (Quechua). Risking his personal safety, he produced artwork that criticized the Peruvian government’s tactics during a time of war, and continues to use his art to expose corruption and abuse. The Jiménez family includes many of today’s most renowned producers of Peru’s retablos ayacuchanos, the iconic boxes with hinged doors containing figures and scenes sculpted from plaster and potato starch. Edilberto and his brothers Nicario, Mabilón, and Claudio (familiar to many from the International Folk Art Market) all have pieces on display at the Museum of International Folk Art’s exhibition Crafting Memory: The Art of Community in Peru. Originally from the Ayacucho region of Peru, the family migrated to Lima for safety during the internal armed conflict between the Shining Path guerillas and the Peruvian armed forces. During the violence, Edilberto and his brothers used their craft to create testimonies of human rights violations and the atrocities that were committed on both sides. The Spring 2018 issue will also convey MOIFA’s discussions on how to provide access to this important art while maintaining a family-friendly atmosphere.

The Summer 2018 issue will include a conversation between Nora Naranjo Morse and Aymar Ccopacatty—two indigenous artists who created projects that involve changing notions of the landscape, natural resources, and traditional knowledge. Despite the geographic distance between their ancestral lands, located in North and South America respectively, each artist confronts the ever-growing presence of garbage dumps and landfills on their homelands. Rather than seeing this waste as a modern problem separable from traditional culture, each has found a means to reincorporate these discarded pieces of consumer-driven culture into an artistic practice. The process of creating the art itself may be considered a demonstration of resourcefulness, creativity, and individual community responsibility: an act that is not only about healing but also about looking to the future. “Native culture has been discarded by dominant culture much like this trash in the landfill,” Naranjo-Morse says. “How do we pick up the pieces of what has been discarded of our cultures and reconfigure them for the future?”

Aymar Ccopacatty (Aymara) applies traditional techniques of knitting and weaving to plastic garbage he collects from around Lake Titicaca in Puno, Peru. Plastic bags are replacing sheep’s wool and camelid fiber as the most abundant “harvestable” material in the landscape. He asserts that we are living in an age of plastic and that we cannot ignore it as part of our heritage. Over the past decade, he has knit large-scale sculptures from plastic feed sacks, grocery bags, caution tape, and sheet plastic found in the environment. Similarly, he has experimented with spinning plastic on a drop spindle, created woven plastic textiles, and constructed warp strings from discarded billboard vinyl. His work Ch’ullu for a New Leader, a ten-foot-tall knit cap with earflaps, is part of the Museum of International Folk Art’s exhibition Crafting Memory: The Art of Community in Peru.

Locally, Nora Naranjo Morse (Santa Clara Pueblo) brings into focus the damaging effects of American mass production and consumerism on Pueblo values of resourcefulness, reciprocity, and respect for the earth. In her latest work, Cause and Effect, she has produced kinetic sculptural forms that combine recycled material she gathered from the Santa Clara landfill with traditional clay. The idea for this project occurred during an experience she had while gathering clay at a traditional pit that Pueblo people have used for generations. As she relates, “I went to gather clay at our traditional pit . . . and as I went over on top of the hill and stopped, I saw the Santa Clara dump and realized the close proximity to the clay pit . . . this river of trash almost seemed like it was coming towards this clay pit.” The experience sparked many questions that she has continued to explore in Cause and Effect. Naranjo Morse frames global indigenous issues in ways that remind us that individual daily choices we make have profound, cumulative effects on the larger world.

In the Fall 2018 issue, series contributor Mateo Romero (Cochiti Pueblo) takes on a form of cultural appropriation that claims and co-opts Native intellectual spaces in the visual and performing arts, literature, and academia. Romero asserts that indigenous artists and writers need to direct and lead more arts and culture projects, to exercise a more active Native voice, and to reflect on what occurs “if we don’t, and others step in and take our place.” The term he coined, semiotic sovereignty, encompasses this concept.

As Romero says, cultural appropriation of [intellectual or discursive spaces] is a complex and often contentious topic because of its links to power and authority. And yet, for museums, it is critical to provide a forum that engages a spectrum of perspectives in order to more fully understand its complexities. Too often “Native voice” and “Native authorship” are pitted against academia or museum authority as if these positions cannot coexist. Indeed, Native oral history and traditional knowledge not only provide a sense of depth that enriches scholarship; they also expand our understanding of traditional and contemporary indigenous ways of being. In the last couple of decades, Southwest archaeology has shifted, increasingly incorporating oral history into its narratives through collaborations with the descendant communities of ancestral sites. Many artists, including Mateo Romero, Ted Jojola, Joe Horse Capture, and Heather Ahtone, suggest that Native voices no longer need cultural translators. Instead, Natives have both their respective tribal worldviews and their Western educations, and are able to speak both for themselves and to the public at large.

Still others support collaboration, seeking to combine institutional resources together with tribally based forms of knowledge and resources to achieve greater, enriched ends. (Diego refers to Mateo’s brother, who is also an artist. Mateo’s work is included in the exhibition. For more on Mateo Romero, visit the exhibition Diego vs. Indian Art, on view at the Museum of Indian Arts and Culture June 3, 2018–January 6, 2019.)

In Spring 2016, national retailer Pottery Barn released a line of embroidered throw pillows, drink coasters, table runners, and other housewares called “Otomi” after the indigenous Otomí communities of Mexico, famous for their embroidery traditions. As it came to light that these products were machine-embroidered in China, with no clear benefit to the communities where the designs originated, Pottery Barn received broad public criticism, including becoming the subject of a Change.org petition. Pottery Barn has since struck the Otomi name from the products’ descriptions, which now say, “Inspired by traditional patterns and embroidery techniques from Central Mexico.” But does striking the name from the product line solve the issue? How does the mass production of replicas of Otomí artistic heritage affect the market for products handmade by Otomí themselves? What rights does a community have to control the use of its ancestral designs and cultural traditions?

As communities work to establish legal boundaries for use of their names and designs, more people are becoming aware of these culture-based intellectual property infringements. The Navajo Nation sued Urban Outfitters in 2012 for the use of their name on products. In 2017, Guatemalan weavers petitioned their congress for legal protection of designs. To address this subject, and in an attempt to dispel the ignorance around it, Simon Fraser University’s iPinch (Intellectual Property Issues in Cultural Heritage) produced a free online guide for designers called Think Before You Appropriate: Things to Know and Questions to Ask in Order to Avoid Misappropriating Indigenous Cultural Heritage (bit.ly/ipinchguide). It explains that meaningful collaborations must include voluntary and prior informed consent, shared control over process and product, acknowledgement and attribution, respect for cultural differences, and reciprocity and benefit sharing.

In the final installment of this series in 2018’s Winter issue, Pamela Kelly and MIAC staff will provide an overview of the Museum of Indian Arts and Culture’s partnership with the Museum of New Mexico Foundation’s licensing program. This program has developed an alternative means for a more responsible licensing process that involves tribal community consultation in an effort to minimize the exploitation of indigenous cultural property. The MIAC Licensing Working Group, which is a sub-committee of the museum’s Indian Advisory Panel (IAP), is central to the success of this project. The MIAC Indian Advisory Panel was established in the 1980s and provides guidance to MIAC staff during the development and implementation of exhibitions, public programs, and educational initiatives. This active and knowledgeable advisory panel ensures that the interpretive perspectives that MIAC presents in their numerous projects and initiatives are—to the greatest extent possible—culturally appropriate and based on sound research and understanding about the Southwest indigenous world view under discussion. The IAP Licensing Working Group reviews proposals from for-profit companies that are requesting licenses to use modified designs from the pottery, textiles, paintings, and basketry of the museum’s collections. The goal of this sub-committee is to avoid cultural misappropriation and uphold proper use of images. Central to this project is the belief that it is possible to adapt and reproduce specific vetted imagery in a way that is dignified and respectful, and celebrates the artistic achievements of the Southwest Native peoples.

By exploring these issues with people whose work is at the front lines of these debates, we hope to encourage you, as members of our community, to be empowered to re-engage with these challenging topics as thinkers, conversationalists, and consumers.