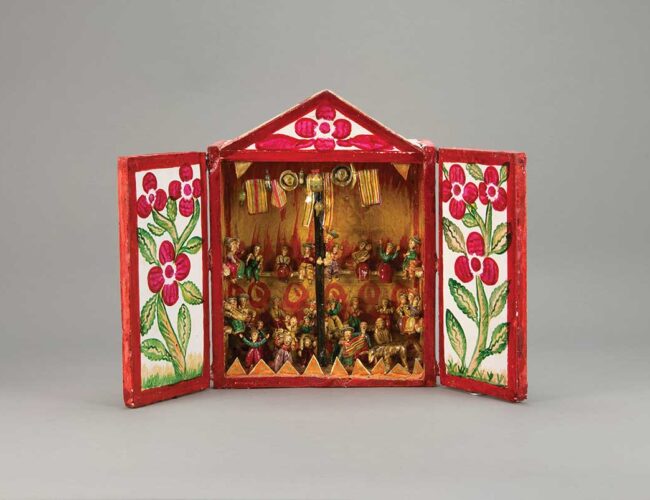 BY AMY GROLEAU | TRANSLATED, FROM THE SPANISH, BY STEPHANIE RIGGS AND AMY GROLEAU

At the height of the violence of Peru’s Internal Armed   Conflict in the late 1980s, Edilberto Jiménez Quispe (Quechua) created a series of singular works giving testimony to the atrocities being experienced in his home region of Ayacucho. Using the art form passed down from his parents, Edilberto created scenes in miniature with potato flour and plaster, filling decorative boxes known as retablos with truths that were being suppressed in journalistic outlets.

Retablos are perhaps the most famous of Peruvian folk arts: brightly painted boxes with  triangular pediments and hinged doors that open to reveal festive scenes of village life in the Andean highlands. The history of this art form begins with portable altars. In a blending of Catholic and Andean religions, boxes containing the figure of a saint were brought out to the fields as part of agricultural rituals, especially the herranza festival, when owners branded their animals. It came to be known as a Cajón Sanmarcos, or St. Mark Box, named after the patron saint of cattle. Often containing two floors, in older retablos the top level represented the heavenly world, or hanan pacha, which was the domain of the saints. The lower register contained the earthly world, kay pacha, with villagers and their livestock.

Peru’s Ayacucho region is home to some of the most famous retablo makers, including the Jiménez family. Hailing from the Alcamenca district of Ayacucho, 10,500 feet above sea level, Edilberto’s parents, artisans and farmers Florentino Jiménez Toma and Amalia Quispe Sulcaray, produced retablos in the Sanmarcos tradition, and trained their seven children, including Edilberto, in the art. A religious man, Florentino’s work retained traditional themes of saints, while mixing in new scenes of indigenous customs and folklore.

Folk art enthusiasts began collecting retablos in the 1940s. By the 1950s, artisans had shifted from primarily making retablos for their community members to producing large quantities with international markets in mind. With new clients came new themes, and the scenes inside the boxes changed to accommodate external tastes. Retablos became bigger and more secular, favoring festival scenes and idyllic images of highland Quechua culture. In 1959, Neiman Marcus ordered dozens of retablos through Lima gallerist John Davis for their Dallas store’s Fortnight celebration of South America. The batch Davis sent to the United States included both conservative depictions of saints by Joaquín López Antay, and raucous festival scenes by Jesús Urbano Rojas.

While also depicting festivals and folklore, the Jiménez family pushed their designs in the direction of social commentary. This was especially the case for sons Nicario and Edilberto, whose work became more overtly political with the bloody conflict between the Sendero Luminoso (Shining Path) militants and the Peruvian Armed Forces that began in 1980 and ended in 2000. Edilberto studied anthropology at the Universidad Nacional de San Cristóbal de Huamanga in Ayacucho and also worked as a journalist. His unique background as an ethnographer, journalist, neighbor, and artist distinguishes his work on the Internal Armed Conflict.

During the 1980s, Edilberto created a series of retablos depicting veiled and overt stories of war. Literal depictions include a retablo showing the humanitarian work of the International Red Cross, while others were more allegorical, showing green parrots (military forces) decimating the crops (livelihoods) of highland villagers. One piece in particular marked a pivot in Edilberto’s color palette and the graphic depiction of violence suffered: Sueño de la Mujer Huamanguina, or Dream of the Woman from Huamanga, created in 1988. (Huamanga is another name for the city of Ayacucho.) It highlights the plight of women, and was inspired by the women who formed ANFASEP, the National Association of Families of the Kidnapped, Detained, and Disappeared of Peru.

In the spring of 2017, the Museum of International Folk Art commissioned a replica of this important piece, and the following is excerpted from an interview with Edilberto Jiménez Quispe in his workshop in San Juan Lurigancho, Lima, in April of 2017.

“During the time of violence, I made many works that represent its dramatic scenes, including The Dream of the Woman from Huamanga. I lived through it. I would hear how the women asked for help. I would see women walking from one police station to the other, looking for their relatives. I have seen so many, sitting, begging at the doors of the court of justice, desperate to know how their detained relatives are. Are they alive or are they not alive? I think that women have experienced the worst political violence; they have suffered very much. In this retablo, you see a woman under a hill, in a cave full of gold and silver. She’s asleep on top of a pool of blood, but in her dreams, she is dreaming about her beloved who is being arrested, jailed, killed, and then cast away. In Ayacucho, there are many places, like at the Infiernillo, and Puracuti, where people were tossed away after being assassinated. Family members looked for them there, and sometimes would find remains, like clothing, or only skeletons, or sometimes they would find nothing, or they would find animals, like dogs, or buzzards, eating the bodies.

“The European God, the Lord, the Eternal Father, is compassionately sending the archangel to recover the soul that is in the ravine, and taking him to heaven. The Andean Gods, the Sun and the Moon, are seeing this scene and crying.

“The colors in this retablo are symbolic. I used black because at the time, the women and families dressed in black. Every day, they would bring the dead to the cemetery, sometimes accompanied by many family members and sometimes just a few people. There was black in the streets of Huamanga; everyone and everything was in mourning. I also used black to represent the people’s desperation as they asked for help. Sometimes, they would take out white flags to represent the desire for peace. That’s why I painted white flowers over the black background. In the midst of these white flowers is another symbol: the hummingbird. In the Andes, the hummingbird is the messenger who goes to the Andean God to advise him what is happening. It is the messenger. Like the women, the hummingbird is desperate to tell the news. Its beak is like a trumpet.”

(Interview was translated, from the Spanish, by Susan Howard, with Stephanie Riggs.)

It was particularly dangerous for Edilberto to criticize the military during this time. The armed forces routinely “disappeared” people, pulling them from their houses to question them about their Shining Path activity. They were never seen again.

Simultaneously, Shining Path made examples of those suspected of being soplones, or informants, to the military by barbaric methods: hanging, drowning, decapitation. Even today, the act of displaying artwork in Peru that shows human rights violations committed by the military carries risk.

Although the independent Truth and Reconciliation Commission determined that one third of the nearly 70,000 deaths during the Internal Armed Conflict were caused by the armed forces, congress members of the political party Fuerza Popular, who back the former president Alberto Fujimori, accuse ANFASEP’s Museo de la Memoria of being Sendero Luminoso apologists for showing such artwork.

Here in New Mexico, we recognized the explicitly violent content as a display challenge. In response to concerns that Crafting Memory visitors with young children might not want them to see these images, we created a separate gallery within the main gallery, where all war-themed artwork is on display in the exhibition. The signs alerting visitors to graphic content also allow those who lived through this conflict to decide if they want to directly engage with this material.

Edilberto currently lives in Lima, where he continues to create retablos, write, and advocate for human rights in Peru. Additionally, he has worked with rural communities as part of an agricultural development NGO, was a member of the Peruvian Truth and Reconciliation Commission, and was a member of the advisory team for the human rights organization Apoyo Para la Paz (Aid for Peace).

In 2005, he authored the book Chungui: Violence and the Traces of Memory, in which he created line drawings to illustrate the testimony of members of the community of Chungui, a district where nearly twenty percent of its population was killed during the war.

El Sueño de la Mujer Huamanguina and other works are on display as part of the exhibition Crafting Memory: The Art of Community in Peru through March 10, 2019.