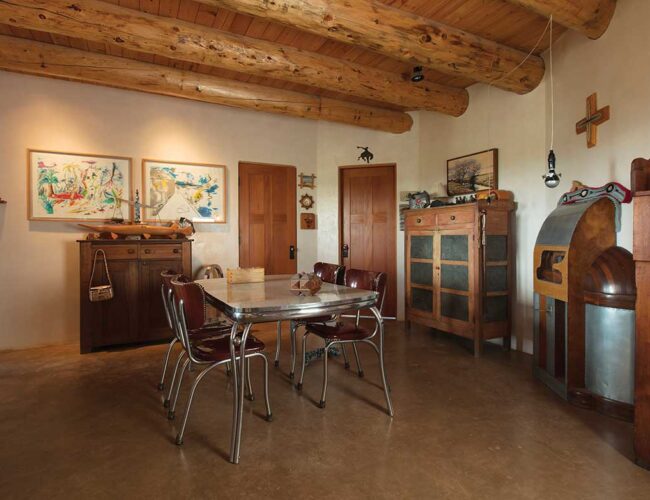 Meet James Holmes, “Compulsive Artistic Humorist.” That wouldn’t all be on his business card, of course. But if he had a full-disclosure card, it could legitimately say, at least, “Sculptor, artist, woodworker, cabinet-maker.” Maybe “art on impulse.” Maybe “collector of the curious.” And on the other side, a view into his whimsical mind: a full-sized pie, the kind Mother used to make, except Holmes crafted his in detail from sheet-lead, patterned in the crust, scalloped at the edge, with a servable slice. A feather sticks out of the crust, for no known reason. When asked about it, he responds, “How would I know? It made sense to me.”

Holmes laughs a lot. At himself, at his work, and at the world around him. Born 67 years ago and bred deep in the heart of Kansas, he speaks with an earthy native flavor, well fertilized by years of laughing, talking, and telling stories with acceptable exaggeration. He is customarily clad in denim, with legitimately scuffed boots and one of his many weathered cowboy hats. He resembles both Mark Twain and Will Rogers.

That pie? He made a sweet, wooden, screened portable pie carrier as a Christmas gift for his wife one year. Then he thought, “I’ve got a pie carrier, got to make a pie.” He’s now baked about twenty in different shapes, materials, and flavors, among them wood, metal, linoleum, and other secret ingredients. “Why not?” he laughs. “I like pies. Everybody likes pies.” To Holmes, that’s enough.

Holmes is a committed, joyful collector of mostly twentieth-century art pieces, from the twenties and the thirties, the quirkier the better. “I like weird stuff—weird and different,” he proudly admits. He and his wife, Susan, a talented graphic artist and musician with apparently infinite good humor, live south of Santa Fe “beyond the state prison, behind the feed store, down about a mile.” Their house is comfortably alive with more than a hundred pieces of popular art they have discovered—sometimes just curious stuff, most often odd, overlooked, and undervalued by others. They take “aimless” driving trips to prowl flea markets, garage sales, and barn declutterings.

He can’t resist recalling a flea market in Wichita where he came across an imposing tramp art picture frame: gold-hued wood finely made in that carefully notched and layered style. It simply presented a cheap magazine picture of the Mona Lisa, but it was the hand-carved frame that captured him.

“When I told the woman I might like to buy it,” he mirthfully remembers, “she said, ‘Yes, of course. It is a lovely picture.’” He paid her $50. Mona Lisa, in her frame, still lives with the Holmeses, and still smiles about it, too.

His mother, a school librarian, gave him his first tramp art box when he was twenty. As with much tramp art, she couldn’t quite say what it was or where it originated. Neither could he—a sewing box, maybe—but he liked it. He keeps it still, near his workbench. To fill out the picture of his original-minded family, he remarks his father was “a civil rights lawyer before the term became well-enough known in Wichita to be disliked.” He cherishes a letter to his grandfather from legendary Emporia, Kansas editor William Allen White, vowing to fight the Ku Klux Klan.

The discovery of that letter among the family papers inspired Holmes to produce a fierce, notched, symbolic sculpture of a large, burned wooden cross bearing tiny figures of a hated hooded Klansman, a charred church, a black crow hanging from a noose. It is displayed prominently in his home.

Tramp art, for the not yet initiated, is kind of a curiosity in the art world. The name may have a restless, open-road Americana flavor. But in fact, the style migrated from Europe in the nineteenth century and was seldom made by tramps or hobos or itinerants. Rather, the vast majority of so-called tramp art pieces were turned out closer to home by men often after a day working in factories or shops or on farms, or keeping busy between jobs. Most of it is made from wood tossed away after some other life, and is undated and unsigned.

When tramp art is found in attics or private homes, its true genealogy is, at best, speculative, depending largely on family lore. “Sometimes family lore is wrong,” remarks Laura M. Addison, curator of North American and European Folk Art at Santa Fe’s Museum of International Folk Art, “but still it’s family lore.” People, she adds bemusedly, “respond to a story of tramp art, no matter how untrue and romanticized it might be.”

Addison sums up the scope of the genre and the exhibition in the associated book No Idle Hands: The Myths and Meanings of Tramp Art (Museum of New Mexico Press). “The objects made were boxes, frames, clock cases, wall pockets and a variety of other household objects—including crosses and other objects of devotion, patriotic expressions, architectural models, whimsies, and an occasional thermometer, bank, satchel, or piece of furniture.” Some people think it is overwrought, too busy and gaudy, she admits. “The people who like it love the woodwork and all the small compartments, even though they may have no function.” Or, perhaps, because.

With a refreshing whimsy of her own, she conceived of and produced a large exhibition about tramp art, an art form she calls “tongue-in-cheek sculpture, with an enigmatic function. Or no function.” Fittingly, whimsy is also a term used to describe little pieces, sometimes complex, with no real purpose in life but to be charming and puzzling.

Holmes could be the poster man for No Idle Hands; his hands are unafflicted by idleness, and the man attached to them is both impulsive and compulsive about producing something whenever the mood strikes him. He is seemingly never more than a thought away from turning out another pie of the day or some equally peculiar object, perhaps impossible for a conventional mind to imagine, but easy later to admire for its ingenuity. A description for an exhibition of Holmes’ work at the Phil Space Gallery a while ago said his pieces “are beautiful and elegant in their construction and interplay of surfaces while being humorous, serious, and incisive at the same time.” That spans a lot. But to illustrate, consider the garfish.

A dedicated sculptor, Holmes fashioned a smooth, detailed, two-foot long garfish out of a piece of white pine. A dedicated fly fisherman, he carefully gutted it. A dedicated humorist, he stuffed it with a compartmentalized wooden case neatly fitted to house a three-piece pool cue he invented with a swiveling tip “for shooting around corners.” Since the garfish is a bottom feeder of no great renown, Holmes explains, “I thought calling it a pool garfish was more accurate for me than calling it a pool shark.” He used the cue only once. “They let me win.”

The line between fine art and folk art, of which tramp art is a part, is quite clearly drawn. In sum, fine art is a trained discipline. Folk art generally emerges from the traditions and culture of a community. Holmes is formally trained with a fine arts degree from the University of Kansas and a master’s degree in sculpture from the School of the Art Institute of Chicago. He takes it seriously, with deserved pride.

“I’m not a folk artist or a tramp artist,” he points out. “I’m a trained artist, a sculptor, a cabinetmaker. I use that training in my work. When I make art, it’s because I have an idea and an image I want to convey. I love wood. But I like to work in different styles with various and sundry materials, sort of a gourmand, not a gourmet,” he says, waving at piles of scrap wood, sheet lead, an array of linoleum shards around his workshop. He likes linoleum because it is colorful and has always been cheap, making it well suited for low-cost creativity. “I have the definitive collection of old linoleum in the world,” he enthuses, as if there might be a competitor. “I just made that up, but I’m sticking to it.”

One of the unexpected high spots of No Idle Hands is Holmes’ tramp art iron, a smile-provoking little creation of notched layers of brilliant yellow shellacked pine, with a walnut handle and an aluminum base plate. “I don’t like ironing, I just like irons,” he says.

“You start doing something like that, and the next thing you know, you’ve spent six hours at it,” he says. “It’s absolutely a compulsive art. You don’t have a manual to work from. It’s all between the ears. There are no rules.”

And with no rules there are happy accidents. Holmes calls them part of the creative process. “You do something, and you think, ‘That’s kind of weird.’ Then all of a sudden, you look at it again, and you take a left turn. Or a right turn.”

He goes on, excitedly, his thoughts notching into the creative experience. “I’ve never seen a drawing for a piece, or a set of plans. This is definitely pre-computer work. I’ve also never seen a piece of abstract tramp art,” he adds.

Three items from the Holmes home collection are on loan to the exhibition. One, of course, is Mona Lisa and her tramp art frame. Another is a large wall piece with at least seven obvious and several secret drawers. Concealed compartments are often a characteristic of tramp art. Think runaway, purposeless creativity. Think also they are probably a great place to lose your keys.

He concedes that with all that detail, mistakes are made; there’s too much “notch-notch-notch” not to make some. “Elmer’s glue is how the world is held together. That and duct tape.”

He says he spent years trying to find a Santa Fe gallery that would be interested enough to show his idiosyncratic work, with no success. “Then, finally, one agreed. We sold eighteen out of twenty-four pieces,” he says, with dry satisfaction.

Holmes’ artistic role models are H.C. Westermann and Marcel Duchamp. Westermann, it turns out, is a deceased, lesser-known American post-war artist. For a retrospective Westermann show in New York a year ago, Verve Gallery wrote, “he stands alone as an eccentric art world maverick.” Better-known French-American Duchamp stands alone by his urinal.

For his tramp-style fine art, Holmes works pretty much the way earlier whittlers and notchers did. He relies on a carver’s knife, an inexpensive razor saw like the ones model makers use, occasionally a chisel. A while ago, after decades of wood-working this way, he moved to his version of “advanced technology” (though he doesn’t yet use e-mail). He built a small wooden trough about two feet long to hold the pieces of soft wood as he notched them. He can carry it under his arm, like tramp artists might have done, had they thought of it. “Tradition is, you hold the wood in your hand for notching. Tradition cut my fingers a lot.”

Holmes doesn’t often deal in human figures. But, there in his workshop, with that whitening hair pursuing his white mustache and light beard, quietly contemplating through his glasses a chunk of old wood, little knife in hand, preparing to create, carve, notch, and shape it into something affectionately memorable, James Holmes’ charming creative muse comes inevitably into view. Geppetto.

Les Daly has reported for such publications as Smithsonian and the Atlantic, and frequently on a variety of interesting people and subjects for El Palacio.

You can read Laura M. Addison’s recent El Palacio article on the exhibition No Idle Hands at bit.ly/tramp_art.