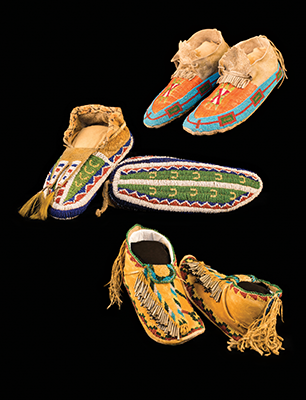 Few things make a conservator swoon quite like a good adhesive. After all, in a business that often begins with lots of things falling apart, a good adhesive can be the difference between smiles and frowns around laboratory worktables in conservation labs the world over.

So imagine fifty or so pairs of moccasins, almost all heavily beaded, in various states of disrepair—tears in the heels, thread unraveling, some folded into themselves like scared armadillos, and all the gashes and distresses of a lifetime of wear and—in some cases—six to twenty lifetimes of storage. This enormous challenge faced conservators working to prepare the heart of the Stepping Out exhibition. In their arsenal: their own skilled and nuanced handiwork, and a wonder adhesive called BEVA 137.

Before BEVA enters the picture, the three conservators have other steps to complete. Maureen Russell, Sophie Hunter, and Larry Humetewa clean the moccasins, slowly and meticulously removing mud, dust, and whatever other detritus collects on beaded buck and buffalo hide over vast epochs of time. When necessary (and that is often), they painstakingly rehydrate the hide, using water and ethanol and a variety of handcrafted supports, clamps, and forms.

BEVA got its start in painting conservation when—in 1967—Gustav Berger (that’s the B, followed by Ethylene Vinyl Acetate) went searching for a better way to line paintings—a widely used practice that strengthens an existing painting by essentially adding another layer of canvas, or in cases of serious decay, replacing the canvas entirely. According to his obituary by Janice Hill Stoner, published on the International Institute for Conservation of Historic and Artistic Works website, “He had grown up with art; his father and grandfather were presidents of the Art Dealers Association in Austria, and his father had sent him to look at the treatments being carried out by his restorers.” Clearly, Berger wasn’t content with what he found.

He experimented with a variety of wax-resin combinations, trying to find the right mix of stability, longevity, low melting point, setting speed, and reversability. From among hundreds of these combinations he selected number 371—the first adhesive created for conservation use.

Conservators love BEVA because it provides a reversible medium that is both chemically stable and offers elasticity. Reversibility and chemical stability are of crucial importance for conservators the world over, and its elasticity makes it ideal for working with textiles and leather. And because it is a heat-seal adhesive—both bonding with, and essentially shrink-wrapping itself around uneven surfaces, it is ideally suited for work with errant pieces of thread, very tiny beads, and small tears. In other words, just what the doctor (Berger) ordered for Stepping Out.

Born in Austria, Berger served in the Israeli army before coming to New York. In a different time, maybe, he would have been considered an irrepressible natural scientist—a Robert Boyle sort of character—tinkering and experimenting constantly in an effort to improve the world around him. Although separated by 350 years, both men believed in experimentation as the path to knowledge, and both kept at it most of their lives. Like Boyle, Berger was both a hands-on practitioner and a legendary teacher, crisscrossing the world to give talks and demonstrations.

In over 60 research papers over nearly 40 years, Berger presented new ways to support large paintings, pioneered the study and remediation of paint cracking, developed innovative approaches to filling damaged surfaces, and of course, came up with BEVA.

During a recent visit, conservator Maureen Russell worked on a pair of Cheyenne/Sioux moccasins with blue and white beads, each maybe a millimeter or two in diameter, that depict bison footprints. She points out several places where threads holding beads are coming loose.

Using a strip of BEVA—imagine a piece of Scotch tape about a centimeter long and two-thirds of a centimeter wide, which she holds in place with a pair of tweezers against the loose end of the thread and the main body of the moccasin, she picks up the business end of a precision hot air tool (made in Santa Fe by Steven Prins), and melts the BEVA strip onto the moccasin. “Do you know,” she asks, as she leans in to the work, “that there is nothing more intensely personal than working with these moccasins?”

“You can see the outlines of people’s toes, the shape of their feet in the leather,” Hunter says. She walks over, picks up a nearby moccasin, and points out the clear outline of its wearer’s foot.

Russell straightens up and holds the moccasin to the light, the thread solidly adhered to the hide, and the beads no longer in danger of rolling across the floor. “These are real things worn by real people.”

In addition to stabilizing beadwork, the conservators are using BEVA to repair tears in the heels and elsewhere in a number of pieces they’re working on for the show, and anywhere a little additional stability might be a good idea.

Sometimes, a use might not be so straightforward, as in the case where Hunter was faced with a porcupine quill moccasin that was missing quills in a few places. After doing some research and talking things over with her colleagues, Hunter landed on a novel approach to preparing the piece for exhibition. She took Tyvek, painted it to match the red of the adjacent quills, and then used BEVA to iron it onto the underlying hide. She also once used BEVA to re-attach leather to a tortoise shell shield.

Following news of Berger’s death, the conservator Boris Sternberg posted on his studio wall a memorial that found much resonance in the obituaries that followed: “God made Gustav, and Gustav made BEVA.” The sentiment, if not the exact words, captures a truism in conservation: success is one part tool, one part technique, and one part frustrated conservator who needs to solve a problem.

Peter BG Shoemaker writes about conservation for this magazine.