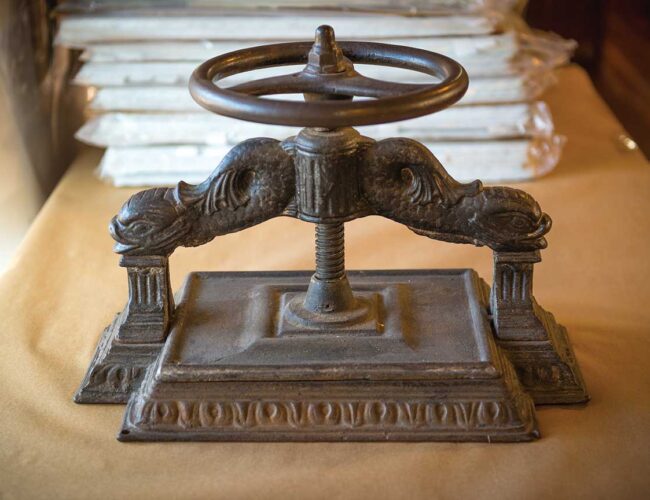 Hovey “Dolphin” copy press, c. 1860, 18 × 12 × 13 in. The top plate measures 9 × 11 3⁄4 inches. There is no known connection between the manufacturer of this press and Oliver P. Hovey, printer of the Kearney Code, the first laws of the Territory of New Mexico. Palace Press Collection (NMHM/DCA).

I went to visit Tom Leech, curator and director of the Palace Press, in hopes of learning more about the huge, historic printing presses and cases with different typefaces that fill the rooms beyond the Palace of the Governors courtyard. Instead, Tom directed my attention to a tabletop object he identified as a “copy press.”

But for its heft, this iron device could have passed for a Victorian gewgaw, something along the lines of door knockers adapted from Renaissance bronzes. It is cast with back-to-back dolphins, their tails swung upwards to support between them a short, fluted pillar. They rest their heads on flared columns above a shaped base with classical egg-and-dart molding. A wheel rising above these forms denotes the mechanism’s function. It turns a massive screw that penetrates the graceful dolphin yoke to raise and lower a plate that forms the top of the base when not in use.

Hovey “Dolphin” copy press, c. 1860, 18 × 12 × 13 in. The top plate measures 9 × 11 3⁄4 inches. There is no known connection between the manufacturer of this press and Oliver P. Hovey, printer of the Kearney Code, the first laws of the Territory of New Mexico. Palace Press Collection (NMHM/DCA).

Detail. Hovey “Dolphin” copy press, c. 1860, 18 × 12 × 13 in. The top plate measures 9 × 11 3⁄4 inches. There is no known connection between the manufacturer of this press and Oliver P. Hovey, printer of the Kearney Code, the first laws of the Territory of New Mexico. Palace Press Collection (NMHM/DCA).

Tom pointed out that the dolphins were not a random decoration, but rather a direct reference to Aldus Manutius, who started a printing office in Venice in 1495, and published Greek classics in portable, paperback-size format. Manutius’ printer’s mark was a dolphin wrapping itself around an anchor. It was the long-recognized symbol of the classical adage festina lente (make haste slowly), which later became a motto of the printing profession.

But this press was not for book printing: it was the original copy machine. As I learned from the informative pages of the tome Tom thrust upon me, Before Photocopying, by Barbara Rhodes and William Wells Streeter, the process was used for over 150 years—longer than any other, except copying by hand. The engineer James Watt, famed for his steam engine, patented the invention in 1780. His patent detailed the procedure of moistening a thin sheet of paper and placing it on top of the document to be copied: “squeeze the said papers placed respectively…in a screw press…part of the ink of the writing intended to be copied shall press into and upon and through the said thin moistened paper.” With Matthew Boulton, the noted designer of silver plate, as his financial partner, Watt opened a business to market his copy presses, which he sold with bags of powdered ink. It was essential for the process that water-soluble ink was used in order for the original to be replicated. The original could make a maximum of five copies before it could no longer bleed ink.

The migrating ink would leave a slightly blurred and reversed copy on the contact sheet. The sheet had to be thin enough to be read from the other side to make the mirror image legible. By 1805, special tissue paper was manufactured for the purpose in France. Over time, various fibers were introduced to strengthen the paper. The problem of the fragility of the loose sheets led to the marketing of bound copy paper books.

From 1782, Watt’s presses were sold in the United States, where they caught on quickly, as the need for duplicating documents grew with the expanding territory. Ben Franklin had already ordered three in 1781 when he was stationed in France. Thomas Jefferson owned several, and was the first to bring the device into government use when he purchased one for the State Department in 1789. Presidents from George Washington to Calvin Coolidge used these presses, though Washington was so concerned with the possibility of forgery that he commissioned special copy paper bearing his personal watermark.

The ornate dolphin press was patented in 1860 by Francis Hovey of New York City. The Palace Press has an example of Hovey’s first model, which he soon simplified, eliminating moldings and fluted pillars. Still, it succumbed to market competition by the 1880s, due to its relatively high price.

Originally the tools of gentlemen, copy presses became required business equipment, particularly for railways. The Palace Press also has a massive version cast with the initials “AT & SF” of the Atchison, Topeka and Santa Fe Railway.

Although the photocopier finally took over its function, the copy press was an inexpensive and legally recognized method of accurate duplication well into the twentieth century. More than an outdated artifact, the dolphin press and its elegant symbolism connects it to the long and multifaceted history of printing. n

Penelope Hunter-Stiebel was a curator at the Metropolitan Museum of Art and the Portland Art Museum, Oregon, and recently curated Mirror, Mirror: Photographs of Frida Kahlo for the Museum of Spanish Colonial Art.