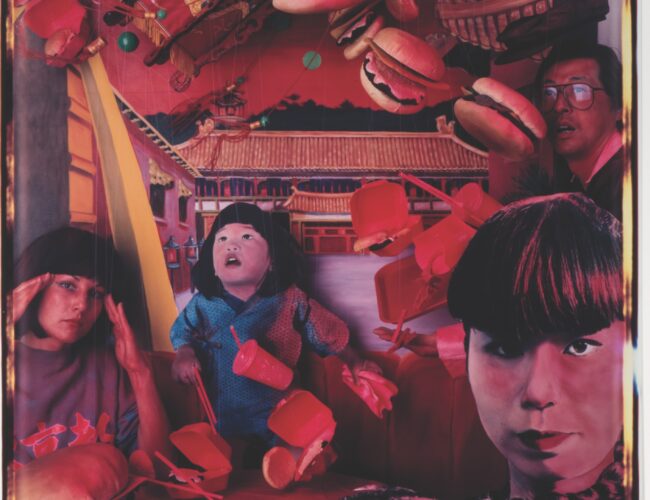 Andrée Tracey’s painted backdrop for this photograph will be on view in the exhibition Patrick Nagatani: Invented Realities, courtesy of the Albuquerque Museum

Photographer Patrick Nagatani (1945–2017) didn’t just take pictures, he made pictures. While most art photographs are the result of careful choices about subject, framing, lighting, and other factors, Nagatani went to even greater lengths to get the image he wanted. With experience working in Hollywood special-effects and an MFA from the University of California, Los Angeles, Nagatani created models and constructed scenes specifically for his camera beginning in the mid-1980s. For this image from a series of collaborations with his friend Andrée Tracey, they put together a complex tableau that doesn’t have a firm narrative, but rather embodies the cultural dissonance of being Americans of Japanese heritage. Tracey refers to the signature architecture of both countries in her painted backdrop—a temple and the Golden Arches. The cut-out figures and live people (the artists!) in this scene are navigating their identities as Americans with facial features and family values that connect them with a place of which they have little firsthand experience. Underlying the visible duality are powerful historical disruptions between the two countries, including the internment of Japanese Americans during World War II and the detonation of atomic bombs over Hiroshima and Nagasaki. The vibrant red of the photograph and the flying hamburgers suggest danger and turmoil, even if we aren’t sure what’s going on.

Katherine Ware, curator of photography at the New Mexico Museum of Art, is the organizer of Patrick Nagatani: Invented Realities. She, along with so many others, misses Patrick Nagatani greatly.