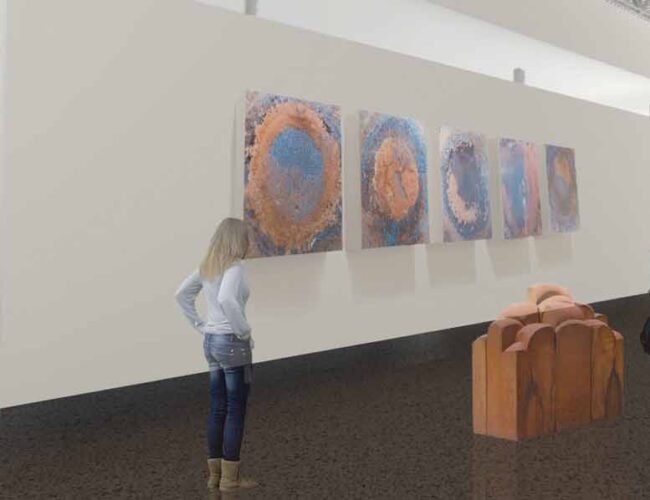 For Mary Kershaw, all it took was one sight of brick walls soaring up to an industrial-style ceiling. For Mike Halpin, it was the old-time freight elevator with a pull-down gate and three buttons: up, down, and stop. For Stuart Ashman, it was empty space.

Ashman’s Halpin Building remembrance starts in 2005, with a cabinet meeting in then-Governor Bill Richardson’s office. The General Services Department reported that it had an empty building on its hands over in Santa Fe’s Railyard District. Ashman, then secretary of the Department of Cultural Affairs, immediately raised his hand. “What do you want?” Richardson asked, feigning annoyance. “I want the building,” Ashman answered. “I want to make a contemporary wing for the Museum of Art.” Richardson laughed. “You’re an empire builder,” he told Ashman, but then added: “Give it to him.”

From that quick exchange, the longtime warehouse’s fortunes budged just a bit. It still endured more than a decade of sundry storage needs and office nooks. But as the Museum of Art marks its 100th year, it looks a few blocks to the south and west, where a blocky building with all the charm of a shoebox nearly missed its chance at redemption. Thanks to the recent gift of $4 million from Santa Fe philanthropists Robert and Ellen Vladem,  along with many other philanthropic contributions, the Museum of New Mexico’s fundraising goals and the $12.5 million target for the project is getting nearer, and it’s on its way to renovation into the Vladem Contemporary, fulfilling a long-held goal of “one museum, two locations.”

Interior of the building in 2016, showcasing the large open main room. The majority of this area will be turned into new gallery space, 2016. Photograph by Blair Clark.

Before ground can be broken on interior improvements, along with a sleekly designed addition that will swoop up and over it, let’s explore the history of a neglected building on a busy corner. It all started with the railroad and an odd alignment of tracks—one set for the Atchison, Topeka & Santa Fe’s spur line from Lamy (now used by the Rail Runner), and a since-removed narrow-gauge set for the old Chili Line that ran to Española, Chama, and Antonito, Colorado. The tracks roughly formed two sides of a triangle, and between them, the Charles Ilfeld Company saw an opportunity. Longtime purveyors of what its founder called “everything”—clothes, dishes, groceries, ranch equipment, cattle, beans, sheep, and most especially, wool—the company built a warehouse there, at the intersection of Montezuma and Guadalupe streets, in 1936 or 1937. It gained terrific rail access, north to south. But its timing couldn’t have been worse.

Ilfeld, a 19th-century Jewish immigrant from Germany, had died in 1929, whereupon the empire passed to his business partner and brother-in-law, Max Nordhaus. But he died in 1935. A leadership vacuum in the middle of the Depression was bad enough, but competing economics clouded the horizon—namely, supermarkets. Other warehousing and distribution firms sprang up to serve the new and improved Piggly-Wigglys of the Southwest, biting off valuable portions of the Ilfeld Company. It moved into hardware for a while, but even that didn’t last. The Ilfeld warehouse cleared out in the late 1950s. A bottling plant briefly moved in. (Historians haven’t been able to pin down which it was; a Coca Cola plant sat nearby, but it dated to the 1920s.)

In 1960, the State Archives hired Joseph F. Halpin as its first director of records. His initial task: Find a place for all those records. At the time, the storage was about to burst the state’s Bataan Memorial Building at its seams. Halpin latched onto the old warehouse, and while his children, including young Mike, finished their school year in Albuquerque, he finalized its purchase by the state and oversaw a box-by-box move. A clunky old freight elevator and a loading dock that faced a corner of what would eventually become prime real estate were just what the overburdened archives needed to efficiently move and manage its mandate.

That summer, Halpin’s young family joined him in Santa Fe. Mike recalls running around the warehouse with his younger sister, Mary Jo. They loved playing with the elevator, in part because “you had to get pretty good to get it to stop level.” His dad kept relocating his own office within the space as more records moved in, but he always seemed to gravitate back to the north end: a later, off-kilter addition to the building that emphasizes the original footprint’s alignment to diagonal tracks that no longer exist. The addition sits square to the street pattern that came later and, today, forms the least attractive part of the complex, both inside and out.

Upon Joseph Halpin’s death in 1985, the building took on his name—and continued taking on boxes of records. By the 1990s, it was crammed. Not only that, but the roof leaked, the heating and cooling faltered, and public access was compromised. A state bond election approved funding for a new building in the South Capitol Complex. In 1996, the Halpin name stayed, but the archives moved. For the next nine years, a variety of state agencies and even a few city departments used the old hulk for office space, until that fateful cabinet meeting in 2005.

“When I was director of the Museum of Art in the 1990s, we had designed an expansion for it on Sheridan Street, to the west of the museum,” Ashman says. “Contemporary art museums sort of arose at the end of the last century. SITE Santa Fe was built. Chicago did one. But changing anything in downtown Santa Fe? Well, you know the joke: How many Santa Feans does it take to change a light bulb? Six. One to change it, and five to say how nice it was before you changed it.”

His Sheridan Street addition failed the historic-preservation gauntlet. But the Halpin? “It was kind of a great deal,” Ashman says. “I’m an alternative-space kind of guy. I saw it and thought, ‘We could just paint the walls and let the artists go crazy in here.’”

First, though, the Palace of the Governors had a crisis on its hands. Its historical collection was stored in the old Armory Building on Lincoln Avenue, and it needed to move so that the building could be razed in order to build the New Mexico History Museum. The Halpin’s vast basement was ideal. Then, a flood at La Villa Rivera—the old St. Vincent’s Hospital and today’s Drury Plaza Hotel, on East Palace Avenue—damaged state archaeological collections held there. Halpin’s main floor provided a high and dry perch for them, along with some part-time office space for a few staffers. “If anyone had bothered to inspect it,” says Eric Blinman, director of the Office of Archaeological Studies, “it would have been red-tagged as unfit for human occupation. The heating and cooling was problematic, to put it mildly. But it was the only space in town—literally.”

State employment had boomed, feeding a competitive hunt among agencies in need of room. Julia Clifton, director of the Laboratory of Anthropology, remembers pleasant summers in the Halpin—the high ceilings and brick walls in the storage area stayed reasonably cool. “But in the winter, there was no heat,” she says. “You didn’t like to spend much time in there. There were a lot of things we liked about it. You could just pull up to the loading dock and roll things in. But no heat was a hard thing to get around.”

“The weakest part,” Blinman says, “was probably that most recent addition, the office tacked onto the northwest side.” Walk through that portion today and you might think you’re in a pennywise parish office. It feels flimsy and still bears the ethos of a 1970s decorating binge. But as for the rest of the Halpin, Blinman says, “The bones are good. It was incredibly well-built.”

Enter Mary Kershaw. When the director of the Museum of Art first visited the Halpin, she recalls that the east side of the building with filled with roller racks, each one stacked with archaeological artifacts. Planning had begun for the New Mexico Museum of Art’s centennial, which involved a remembrance of the building’s inception, before its November 1917 grand opening. Intended to hold the newest in locally produced contemporary art, the Museum of Art was inspired by the historic adobe church at Acoma Pueblo, in a way that would establish Santa Fe Style as a thing. Kershaw felt a 100-year convergence taking root. The museum’s collection had grown beyond its storage space. With the passage of time, the contemporary became the historic, and the building just didn’t have room to show the latest standouts. Some pieces were too big. Others felt at odds with the older architecture.

During that planning, Kershaw again visited the Halpin, mostly to check out its storage potential. The rolling racks of artifacts had moved to the new Center for Archaeological Studies on Santa Fe’s western edge. “This beautiful, two-story industrial-size space stood before me,” she says. “I looked at it, and it spoke to me. It really did. It said, ‘Mary, I am not storage only. I am your contemporary art space.’ And I didn’t disagree.”

Everything about its location seemed right. The Department of Cultural Affairs already owned it, but if it sold, the money would go back to the General Services Department. Finding a DCA purpose for it made sense. It stood on a prominent corner, right next to where the Rail Runner disembarks, near the Jean Cocteau arthouse cinema. Contemporary galleries have blossomed around it (and, sometimes, chafed at its rundown appearance). The New Mexico School for the Arts will soon move nearby, to the old Sanbusco Center. But this building was created for storage and, throughout its life, used mainly for that. Turning it into a people-friendly, event-welcoming gallery would require more than a few nips and tucks.

In an open competition for architects, an Albuquerque partnership stood out. DNCA + Studio GP’s plan recommends tearing off both the northern addition and a smaller one on the south side. In their place, two-story additions will rise, then reach across the Halpin’s length as a bridge. The designs retain both of the building’s orientations—to the old narrow-gauge tracks and to the modern streets—and creates room for a second gallery, an education space, artist studios, offices, and an expansive open-air patio. A second, ground-floor patio will appeal to train riders, possibly with the addition of a café with light fare. Visitors could walk through the length of the main building or enter galleries on the east side where, unfortunately, most of the brick must disappear. “You can’t hang art on bricks,” Kershaw says ruefully. “We’ll preserve as much of it as we can.”

The design invites light into the building, filtering it where necessary, but altogether crafting a sense of place entirely foreign to the building’s 80-year history as a hunkered-down, nondescript storage unit. “This will be the first time where the balance of the building’s purpose changes,” Kershaw says. “It’s not just about stuff. It’s about learning and engagement.”

For Blinman, who endured the building at its worst, that’s welcome news. “We made it through that scarcity, and now there’s this new use that none of us could have predicted,” he says. “They managed to hang on long enough for something good to happen.”

Thanks to the Vladems’ major contribution, the building will bear their name, but Joseph Halpin’s legacy will also be recognized in some fashion, which pleases his family. “We’re happy the building’s being put to good use,” Mike Halpin says. Besides, he adds, Santa Feans have a funny way of noting landmarks by what they used to be. “For a lot of people, until we all die off, it’ll still be the Halpin Building.”