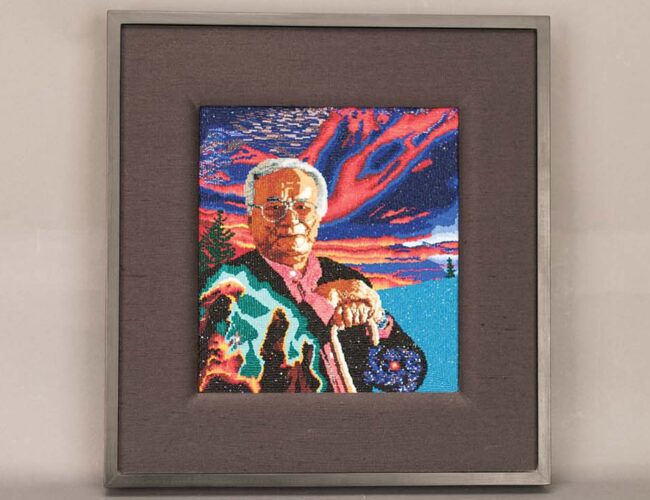 I create many things in beadwork, but of all the things I bead, I appreciate making bead portraits of my heroes the most. My particular style of rendering faces and imagery in sewn beadwork was born out of respect for the hero—specifically conceived, developed and honed with the intention of honoring the subject of the beadwork through their faithful depiction in size-13 glass beads. This attitude towards my process found itself ideally suited when I was commissioned in 2002 to create a memorial portrait of someone I personally knew as a great leader, mentor, and friend: Lloyd Kiva New. I see my “photobeadalism” as created to honor those who led, taught, created, and lived for their people. Lloyd was such a person.Just ask my mom.

My mother, Harriet Amerman, 91, was Lloyd’s student during World War II, and fondly remembers, “He taught me art in high school at the Phoenix Indian School. I always chose his class because he was so funny. He was always nice, and friendly, and funny. He liked to crack jokes!”

Or you can ask my cousin, Linda Lomahaftewa, professor of painting at the Institute of American Indian Arts (IAIA) for forty years. “I took a textile and fabric design class from him when I went to high school at IAIA. He was always encouraging. He could tell you what was great about your art, and also what needed exploration or direction in a way that didn’t make you feel criticized. It was always encouraging for me.”

I could tell you how supportive he was of fashion, and of our IAIA fashion performance group, NATIVE INFLUX, and how he loaned us the use of his home for two weeks to help us prepare for a fashion show at the opening of the IAIA’s Museum  of Contemporary Native Arts. Or I could tell you how he would always come to your opening, show, performance, or booth, and be delighted…and tell you why. He was a champion of contemporary Native American art, and I think he saw the arts as a faultless mirror, reflecting the life and health of a people. “No arts, no culture,” he would say. He cared about the fate of his people.

Lloyd was a chief. Lloyd was my chief, and I think his place of importance in the history of contemporary Native American art is unique and stellar, like some sort of cosmic collision that creates planets and moons. Maybe that’s why I put a spiral galaxy and the Eagle Nebula on the fabric of the jacket that Lloyd wears in my beaded portrait of him. He saw the big picture, he was the big picture, and that’s why I made it look as if you could see through him to a bigger, better world.

Lloyd was a charismatic leader, and he was a warrior chief. He was at the forefront of the battle. He was wise. He was a teacher of warriors…and created a school for them. Lloyd taught me that success in our Indian art world required a combination of creativity and bravery: creativity to innovate the idea that can take our people a little further, and bravery to actually do the thing. Creativity is the plan, but bravery is the execution. And bravery isn’t fearlessness or a lack of fear, but rather it is clear-eyed acknowledgement of the fear, danger, and consequences, along with the will to go beyond fear.

I think this idea occurred to me when, after Lloyd’s death, there was a gathering at MIAC of all Lloyd’s favorite Indian Artists. Shonto Begay, Margarete Bagshaw Tindell, the Naminghas, and the Romero brothers were in attendance, and I thought, “These are all my favorite artists, too.” They were innovators, iconoclasts, groundbreakers, and culture heroes, spanning many years of Native artistic expression. I don’t think anyone there had a day job. They were all obviously and spectacularly committed to their art. They were all like clan leaders of their artistic mediums, comfortable with each other in the larger context of the tribe we call Indian art.

He had the most chiefly of digs, as well. He occupied a palatial hilltop adobe mansion that served as his war shirt, but instead of war deeds painted on hide, it had wonderful works of art on its walls that were all accompanied with a tale of the artist, and all ended with the artist giving the piece to Lloyd out of respect. It was an honor to be invited to Lloyd’s for one of his lavish parties, and there was always a chance that you might meet a personal hero or famous person from the national or international stage. I put the sunset in the background of Lloyd’s beaded portrait because I remembered how beautiful Santa Fe sunsets were from his house.

Lloyd felt like family to me. I didn’t have a grandfather growing up, but if I could have chosen a grandfather, it would’ve been him. I was fortunate enough to reintroduce him and his student, my mother, after a fifty-year gap, at an Indian Market in Santa Fe. The joy of that kind of recognition after so many years, and the realization that no one was ever that far apart was cathartic. It made me feel like Lloyd was one of those eagles who took me under his wing and helped teach me to fly and feed myself without my necessarily knowing that I was learning. He was my chief. He was a man of the people. That’s what they do.

My mom recently told me, “One time, we went on a field trip to Mr. New’s store in Scottsdale, and my sister Mary said, ‘Oh, this is such a pretty dress!’ Lloyd had overheard them and said, ‘It’s got a pretty price tag on it, too!’” She said they all laughed. That sounds like Lloyd. He always brought much humor and frivolity to the table. He was enthusiastic and young at heart and always somehow seemed perpetually hip. He made it seem easy, like heroes do.

I’ve been fortunate in this lifetime to have met some of my heroes: the Dalai Lama, Cesar Chavez, Jesse Jackson, and Suzanne Harjo. In my opinion, he’s right up there with all of them. They all exuded the same energy. They all had a peaceful, joyful and powerful presence, but Lloyd…Lloyd was my chief.

Marcus Amerman is a beadworker and multi-media artist from the Choctaw Nation of Oklahoma. He resides in Kooskia, Idaho.