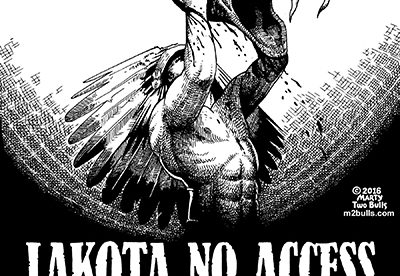 This graphic illustration, Lakota No Access, by Marty G. Two Bulls, Sr., was inspired by the Standing Rock protest, and references the ancient black snake prophecy that warns of a snake that would desecrate sacred sites, pollute water, and ultimately destroy the Earth.

It’s an ancient question: what do you do with defeat? The question flows from ancient stakes: territory, sovereignty, self-determination, protection from harm. According to Buddhist principles, if you set an impossible goal and don’t achieve it, you will still succeed if you remain committed to it.

On this issue’s cover, Standing Rock water protectors ever-walk toward their goal: to protect sacred Indigenous lands against the ravaging incursion of an oil pipeline. That moment, preserved, connects with countless other images of protest through time, one link in an eternal chain.

North Dakota law enforcement blasted the water protectors with water cannons. Water, which is crucial to maintaining life on the planet, trickles into the furrows of planted fields, which insects drink from dew-drenched petals, the air of fish, that intrinsic concoction that makes up sixty percent of us. Humans expire without aqueous replenishment, sometime between three days and a week.

What do we do with defeat? The sandstone gorges of Utah’s Glen Canyon became Lake Powell when the Bureau of Reclamation decided it should be filled with water. People protested, but the project marched on and the waters rushed in. Hence, the photographs and other artistic renderings made before the canyon became a lake are the only places Glen Canyon still exists. The canyon is unconquered there.

This letter’s purpose is not to tell its reader what to do with defeat, but rather to show, in this issue, what people have done with it in the form of art. Glen Canyon artists, from photographer Eliot Porter to painter Georgia O’Keeffe to writer Spud Johnson, captured the canyon in their own ways (“The Canyon Under the Lake,” p. 42). Contemporary photographers Mark Klett and Byron Wolfe, and writer Rebecca Solnit respond to its morphed identity in the book Drowned River: The Death and Rebirth of Glen Canyon on the Colorado.

Standing Rock participants made art during the protests: posters, paintings, video installations, photographs, sculpture—and work in other genres, that bore witness, mobilized onlookers, and shared information robustly alongside minimal mainstream media coverage (“Gone but Not Conquered,” p. 23). Art and social justice fused in the form of mirror shields, a project created by New Mexico-based Native artist Cannupa Hanska Luger after he was inspired by “images of women holding mirrors up to riot police in Ukraine, so that the police could see themselves.” He created a tutorial, shared on social media, that showed people how to affix mylar to plywood and send it to the protestors. He explains it more on cannupahanska.com:

“When a line has been drawn and a frontline is created…it can be difficult to see the humanity that exists behind the uniform holding that line. But those police are human beings, and they need water just as we all do….The project represents how just one person can acquire one sheet of plywood and cut it into six shields, those shields could stand on the frontline protecting hundreds behind them in prayer for the water, and right behind that line stands a camp where there are thousands of people standing for the water protection for the eight million people down river, who all use the Missouri River as their water source. And so the Mirror Shield project demonstrates how one person can help protect eight million.”

One of the enduring questions of the Holocaust is “What would you have done?” When confronted with impending destruction of land, life, and culture, or with defeat, there are infinite possible answers, but they collapse into one: Something. Anything.