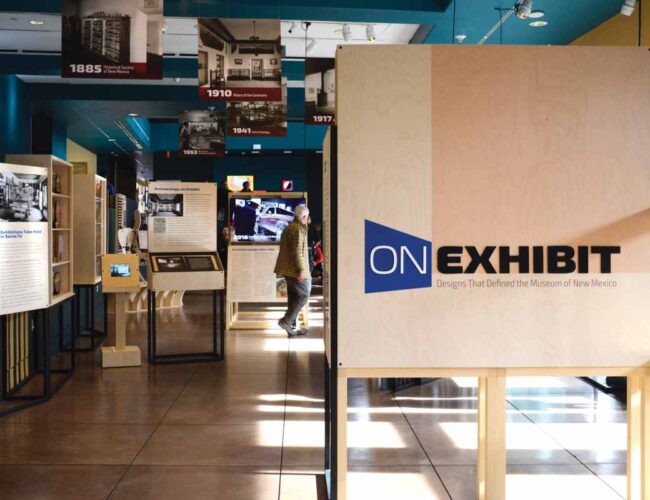 How do you design an exhibit about exhibits? In late 2017, Museum Resources Director David Rohr came to us at Exhibit Services with a new project: Create a meta exhibition that would showcase the long history and ongoing development of public exhibitions within the Museum of New Mexico. Usually, our process for creating exhibits involves collaborating with curators and other museum staff, who draw from works in their collections, or borrow objects from other museums. But how well would our usual process work if that process was part of what we were putting on display?

On one level, we could tackle this project like a straightforward history exhibit. We had a clear story with an arc that followed a century’s worth of changes in exhibition technique and theory within various museums in Santa Fe. It began around the turn of the twentieth century, with artifact displays in the Palace of the Governors, and was followed up with the construction of dedicated museum galleries in the Museum of Fine Arts and now-demolished Hall of Ethnology. Distinctly modern, mid-century designs came to the Museum of New Mexico with the opening of the Museum of International Folk Art. Shortly thereafter, a dedicated Exhibitions Department was formed to provide specialized design, fabrication, and installation services across the growing system of state-run museums. This team-based approach has continued to serve the Museum of New Mexico through the addition of the Museum of Indian Arts and Culture and the New Mexico History Museum. Today, the Museum Resources Division is the direct descendant of that early Exhibitions Department. [To learn more about the history of exhibitions in the Museum of New Mexico, see the article series “On Display in Santa Fe” in the winter 2018 and spring 2019 issues of El Palacio.]

In the earliest Palace of the Governors exhibitions, Native pottery was  displayed without barriers on open shelves. Photo reproductions evoke those early displays without putting actual objects at risk. Photograph by Natalie Baca.

The exhibition process was recreated in miniature as a nod to the once ubiquitous use of dioramas in museum displays. Photograph by Natalie Baca.

The platform, slat panels and articulated plywood mannequins were recreated from photographs taken of the inaugural exhibition at the Museum of International Folk Art. Photograph by Natalie Baca.

On Exhibit includes a pipe-and-panel wall system, hanging rods, and drapery to display photographs from a century’s worth of installations at the New Mexico Museum of Art. Photograph by Natalie Baca.

Embracing the meta nature of the project, one display highlights the design of On Exhibit with Museum Resources staff in behind-the-scenes views working on various aspects of the exhibition. A time-lapse video of the installation literally shows how it all came together. Photograph by Trilby Nelson.

Object mounts, stripped from the artifacts they were designed to hold, become sculptural works themselves. Photograph by Trilby Nelson.

A visitor favorite, the large collage of wood and metalworking tools includes many pieces that were retired after years of use by fabrication and preparation staff. Photograph by Natalie Baca.

This history could be traced through a variety of sources, including newspaper clippings and archived photographs, catalogs and opening invitations, sketches, blueprints, and recollections from staff going back decades. These documents became the objects around which we began designing the new exhibition, each one telling a different story and providing a different glimpse into how exhibitions were developed in years past.

Even with these resources at our disposal, the design team knew that this had to be more than a collection of framed photographs and documents mounted on the wall. We wanted to convey a sense of what it would be like to walk through an exhibition at the Palace in 1911, or the Art Museum in 1940, or Folk Art in 1953. Documents alone would not be enough; we needed to recreate key components of these exhibitions for our contemporary audience.

After reviewing the stories and historic photographs, we developed a list of potential elements to recreate for our exhibition. Of those, four elements stood out given their historical importance and diversity of style. Some of the earliest displays in the Museum of New Mexico system were shelves lined with Pueblo pottery in the Palace of the Governors, so adding them was a natural starting place. Other candidates for inclusion were the draperies and pipe-and-panel systems the New Mexico Museum of Art used to define spaces within its mid-century galleries. The 1953 inaugural exhibition in the Museum of International Folk Art included a streamlined central platform with abstracted plywood mannequins. The design of these elements was so unique that they were a clear selection even before we discovered an article relating that the platform was inspired by a stage in a New York burlesque theater. Finally, the main floor of the Hall of Ethnology (in the old Armory building on Washington Avenue, where the west end of the History Museum is today) was full of miniature dioramas, and our team relished the idea of recreating one of classic museum exhibition elements that have fallen out of favor in recent years.

With the main elements in mind, we began addressing the design’s physical challenges. The exhibit’s ultimate home would be a 700-square-foot gallery in the front of the Exhibit Services building on Lincoln Avenue, but we had the opportunity to unveil the exhibition to a larger audience in the lobby of the New Mexico History Museum. Our design had to work in two very different spaces. A greater concern was how we would cohesively tie together elements from different times and institutions. The design solution came from the process itself.

One of the great joys of exhibit work is watching an exhibition grow from quick sketches, through detailed drawings and models, to the construction of structures, and finally to the finished surfaces and details that face the public. What if we tried to capture this by putting the underlying structure—the bones of an exhibit—on display, offering visitors a sort of X-ray view into the exhibit construction? Rather than getting bogged down in the minutiae of recreation, we could abstract the core elements of the different historical styles and techniques and rebuild them using a unified, contemporary material palette made up of tube steel, Baltic birch plywood, sugar pine, and chipboard.

Using these materials, exhibition designer Trilby Nelson developed a flexible, modular system that could easily re­configure all the elements involved to work in both spaces. Graphic designer Monica Meehan worked from the geometry of these structures to develop the exhibition logo and typography, and reinforced the material choices by designing labels to be printed directly onto the plywood and chipboard. Exhibit production supervisor David Levine provided a cache of tools from the fabrication shop to include in the display, and along with fabricators Andrew Axtell and Ruby Troup, masterfully assembled every piece of furniture in the exhibition. Preparators Dan Radven and Tim Jag assembled a suite of different types of mounts, elegantly displayed for the first time without the objects they were designed to hold. Designers Antoine Leriche and Natalie Baca created a delightful diorama that shows all of our Exhibit Services staff (in miniature) at work on various phases of this exhibit project, from curation and conservation through design, fabrication, and installation. And David Rohr and I leaned into the meta nature of an exhibit about exhibits by including a virtual flythrough of the model we used to design the exhibit, and a time lapse video of the whole team installing the exhibition in the History Museum lobby.

Even though our work is always on display, it is usually intended to be the silent partner; we arrange the components and set the mood, then recede into the background so that museum visitors can focus on the objects and stories that were selected for exhibition. On Exhibit: Designs that Defined the Museum of New Mexico puts our work front and center. And while this may be a little outside our comfort zone as a behind-the-scenes exhibit team, it has been extremely gratifying to witness our work as the latest in a long tradition of exhibition designers and builders within the Museum of New Mexico.

Matt Celeskey has designed exhibits for various New Mexico museums since 1998, and is currently a senior exhibition designer in the Museum Resources Division of the New Mexico Department of Cultural Affairs.

On Exhibit: Designs that Defined the Museum of New Mexico reopens this fall in the Exhibit Services building at 120 Lincoln Avenue, and can be viewed by emailing tours@msdgraphics.com.