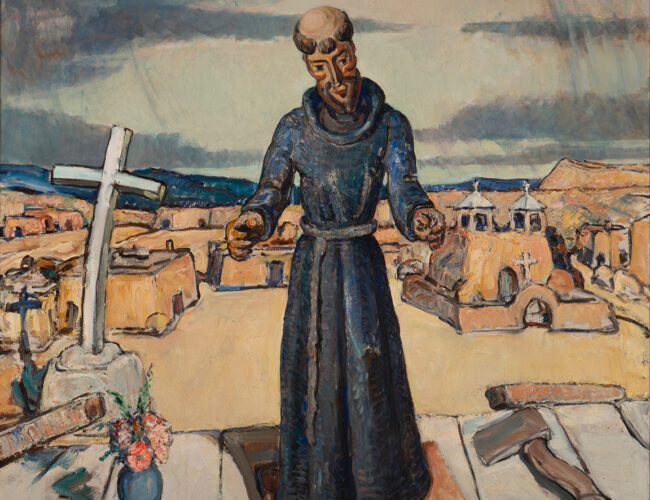 Since the end of the nineteenth century, artists of European descent have been continuously drawn to New Mexico, captivated by everything that we still treasure as unique to our region: the stunning light, the rich multicultural tapestry, the dramatic natural vistas. But as often as they filled their canvases with Indigenous subjects, golden aspens, or sun-drenched mountains, they were equally fascinated with the Hispanic community that has called New Mexico home for centuries. An enigmatic group commonly referred to as the Penitentes was particularly alluring subject matter for artists new to the region.

The Hermanos de la Fraternidad Piadosa de Nuestro Padre Jesús Nazareno (Brothers of the Pious Fraternity of Our Father Jesus of Nazareth) is a lay organization that developed to fill the spiritual needs of New Mexico’s communities after the 1790 withdrawal of the Franciscan order from the area. The Penitentes are a traditional group that holds some public ceremonies which include processions for the local community, but that also tends to keep other ceremonies and rituals—which include religious processions which have been sensationally reported to include acts of self-flagellation and mock crucifixions—private. However, the level of accessibility varies from one morada (meeting house) to the next, and some artists have been invited to witness some of the typically protected ceremonies in person.

Picturing Passion, which hangs in the New Mexico Museum of Art’s Clarke Gallery through August 16, 2020, is not about the Penitent Brotherhood. It is about artists—most from outside the state—and how they have interpreted this uniquely New Mexican phenomenon in their work. As with any interpretation, the imagery these individuals produced was skewed by their own perceptions and backgrounds. Because of this, it is important to note that this is an exhibition about artists’ responses to and interpretations of their own experiences and ideas about the Penitent Brotherhood, not an exhibition about the Brotherhood itself. Picturing Passion explores how regional artists have been inspired by moradas, Penitente processions, traditions, and material culture as source material for their work, scant and superficial as it may have been.

For example, New England painter Russell Cheney didn’t spend much time in New Mexico. In fact, he only spent one winter here in 1929, when he rented an adobe house in Santa Fe to recuperate after complications from tuberculosis. But that short stay was enough for him to incorporate distinctive New Mexican cultural material into his post-impressionist paintings. His 1929 painting New Mexico, Penitente is dominated by a monumental bulto (a carved, three-dimensional depiction of a religious figure) of St. Francis on a white table, flanked by a small vase with flowers to the left and an axe to the right. In the background is an aerial view of Ranchos de Taos Plaza, with the distinctive San Francisco de Asis Church to the right and a large white cross on the left, casting a dark blue shadow on the adobe buildings below. Without the title, there is little about this painting that evokes the familiar images of the Hermanos that have been cultivated over the past century; no secretive moradas, no somber processions, no dramatic mock crucifixions.

With the help of the title, however, certain objects can begin to be linked back to the Penitentes. The axe on the table could be a reference to the death carts sometimes used in Good Friday re-enactments of the Passion of the Christ, in which the figure of death, personified by a gaunt skeleton sometimes cowled in black, is pulled in procession while holding aloft a bow and arrow or, less often, an axe. Likewise, the image of the cross in the New Mexican landscape has become a more general symbol of the presence of the Brotherhood. While at first glance these crosses, which still dot the landscape today, could be just a symbol of Christianity in general, they are indeed a marker of the presence of the Brotherhood. These crosses are known as a calvario, or Calvary.

After a precipitous drop in the number of Franciscans in New Mexico in the second half of the eighteenth century, there came a vacuum of established ecclesiastical order and power in Northern New Mexico; Penitentes stepped in to fill many of the pastoral roles previously performed by priests. Hardly regarded as secretive or sinister, as perhaps myth has made them out to be in contemporary times, the Penitentes thrived throughout Northern New Mexico for a time. Thus, whether the viewer knows it or not, roadside relics do often represent Penitente presence.

The large white cross to the figure’s left recalls Georgia O’Keeffe’s minimalist paintings of crosses, all painted the same year as the Cheney painting, 1929. This was the year of her first stay in New Mexico, when she lodged in one of Mabel Dodge Luhan’s guest houses. From her window, O’Keeffe enjoyed a clear view of the Taos Mountains, as well as the morada to the north. O’Keeffe said of her cross paintings, “For me, painting the crosses was a way of painting the country.” On her first trip, the symbol of the Penitente crosses was such a powerful emblem of the region that they became representative of New Mexico itself in her paintings.

Ultimately, these symbolic connections between the objects present in Cheney’s paintings may or may not have been intentional. In truth, there isn’t much to learn about the Penitentes’ ceremonies or rituals from Cheney’s paintings. However, considering the painting’s subject matter with the title in mind connotes a theme that is more important in the Penitente world view: the sacred.

In his book The Sacred World of the Penitentes, Alberto Lopez Pulido argues:

Hundreds of accounts that claim to capture the sacred quality of the brotherhood fail to appreciate the presence of the sacred in the everyday life experience of the people. They ignore the fact that the sacred is at the core of Penitente identity, experience, and expressions. Instead, these writers are drawn to the outlandish and exotic contours of the penitent community.

The same can be said about many of the artists who came to New Mexico and adopted the Penitentes as their subject matter, and in doing so cultivated the “outlandish and exotic” image of the Penitent Brotherhood that still persists today, and which this exhibition examines. What it does demonstrate is the significant impact that the allure of the brotherhood held for early visitors to the state, so much so that Cheney and O’Keeffe would make them synonymous with New Mexico.

Other artists represented the Penitentes more graphically in their paintings. The most common representations of the Penitentes concern themselves with the Brotherhood’s religious processions, which happen out in the open; thus, the curious have more access to them than they do to the rituals, which take place behind closed doors. Holy Week, or Semana Santa, the week just before Easter and the last week of Lent, is the most important time on the Catholic liturgical calendar. In the Penitente tradition, the mournful imagery of Good Friday, including Christ’s procession to the cross and subsequent crucifixion, is emphasized over the resurrection message of Easter Sunday.

William Penhallow Henderson painted Holy Week in New Mexico in 1919, three years after his wife’s tuberculosis prompted the couple to move from Chicago to the Southwest. Henderson’s subsequent work reflects his excitement in engaging with the distinctive cultural richness of his newly adopted home. Like many of the other artists who were making the move to Northern New Mexico during these first couple decades of the twentieth century, Henderson eagerly looked to the impressive landscape, architecture, and Indigenous culture of the region for original subject matter. He even incorporated Spanish colonial design motifs into his handmade furniture.

Holy Week in New Mexico is a colorful rendition of a Penitente procession on Good Friday as it turns a sharp corner on the path toward a symbolic recreation of Calvary, represented by the cross atop a hill in the far back left. Depicting the procession as it turns a bend in the path allows Henderson to show the scene from two perspectives simultaneously. The viewer is offered a clear view of the carving of Christ on the cross, carried by a well-dressed man, while another figure walks close behind, reciting what a Penitente would know must be eighteenth-century hymns, alabados, from a traditional hand-written book.

There are (perhaps sensational) accounts of Penitentes acting out mock crucifixions of real people; but this painting, it can be assumed, depicts a carving. Penitente santeros are known for carvings of Christ that dramatically emphasize the physical brutality of his Passion and crucifixion, which Henderson renders in the vivid red of the bloody knees, from Christ’s three falls on his way to the cross, and the blood which pours from the nails in his hand and the spear wound in his side. The blood on the Christ figure is echoed in the wounds of men in the procession, who beat their backs with scourges to atone for their sins. As these last figures are seen from behind, the depiction draws attention to the bloody wounds on their backs.

At the start of the twenty-first century, regional artists are still looking to the Brotherhood and its processions, traditions, and material culture⎯as source material for their work. Eighty years after Henderson painted Holy Week in New Mexico, contemporary santero Raymond Lopez carved his Carreta de la Muerte, or Death Cart. Unique to Northern New Mexico, the death cart is traditionally used as a prop in Holy Week reenactments of the Passion of Christ, and serve a ritual rather than didactic function. They’re often laden with heavy rocks and pulled with coarse ropes by those wishing to serve penance.

The first death cart is attributed to Nazario Lopez of Cordova around 1860, and an 1881 description of this early sculpture by Army Lieutenant John Gregory Bourke outlines a composition that has since become the conventional configuration of death carts for over a century. The skeletal personification of La Muerte, in the figure of Doña Sebastiana, holds a bow and arrow, a threatening, symbolic reminder of coming death. These graphic iconic elements have their roots in memento mori (reminders of death) of the old world, Renaissance pasos (religious floats), and even the death card of the Tarot.

Since their early incorporation as penitential objects, death carts have become a relatively familiar theme in modern and contemporary regional Hispanic art, as any trip to Traditional Spanish Market can attest. Lopez’s death cart is a modern rendition of this historic subject, and pulls from the material culture of the Penitentes to render what has become an icon of Hispanic culture in Northern New Mexico.

Though representations of the Penitentes have retained a focus on the more sensational Penitente traditions, this fixation on spectacle can distract from the reality of the Brotherhood as a pious community organization dedicated to caridad, oración, y el buen ejemplo: charity, prayer, and the good example.