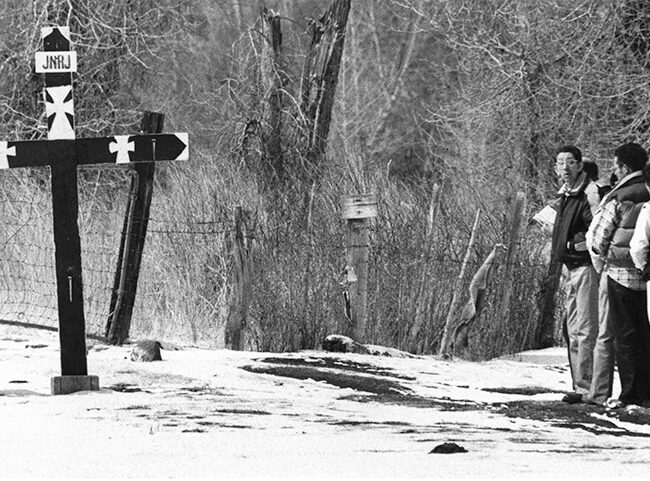 The mystery of the Hermanos or Penitentes that belong to the Cofradía de Nuestro Padre Jesús Nazareno has baffled and fascinated scholars, journalists, Protestant missionaries, and the local Catholic clergy for decades. The story of the Hermanos Penitentes begins in the Santa Cruz Valley in Northern New Mexico at the beginning of the nineteenth century.

The compelling tale of this medieval-like lay organization was first penned by the American merchant traveler Josiah Gregg in 1831. On Good Friday, Gregg witnessed a shocking public Penitente procession and folk tableau that involved flagellation on the plaza in Tomé. He later published his scandalous account in Commerce of the Prairies, his book about travelling the Santa Fe Trail.

The entire church community attended this solemn ritual, as was the custom among the three large parish churches of Santa Fe, Santa Cruz de la Cañada, and Albuquerque. Holy Week services were an amalgamation of liturgical rites, Spanish pious customs, and services led by the Hermanos Penitentes. This consolidation of Lenten and Holy Week services endured in New Mexico even after the arrival of the newly appointed Bishop Jean-Baptiste Lamy and the French clergy. Bishop Lamy never denounced the Penitentes, but tried to consolidate the various moradas (chapter houses) that were constructed in a local vernacular architecture. By 1900, these moradas were located in almost every village from southern Colorado to the Río Bonito in Lincoln County. Services were open to the faithful outside of the brotherhood. The local community was not disruptive to the Hermanos, but respectful and supportive. The hermandad was structured according to the rules of similar confraternities in New Spain (later Mexico) and Spain. Their own customs and material culture helped them to create a unique Christian spirituality within the boundaries of the United States.

The railroad arrived in New Mexico in 1878, enabling the curious to see new cultures. Newspaper and magazine writers mesmerized readers with tales of a remote, unknown world. These fantastical narratives of the crazed Catholic Mexicans in New Mexico alarmed Protestant readers.

On Good Friday of 1883, a bus took tourists from the San Felipe Hotel in the new town of Albuquerque to the nearby village of Los Griegos to observe a Penitente procession. That same year the Los Angeles Herald published an article about the Hermanos in Los Griegos which arrogantly said,

It is now stated that public opinion is setting so strongly against such cruel and barbarous practices, that, with the aid of the church, in a year or two the Penitentes will be a thing of the past. Speed the time.

Tourists, writers, and all of the curious wanted to make sketches of the Penitente rituals. Some were simply contrived using fabricated descriptions, like those published in Harper’s New Monthly Magazine in 1885. False stories and pictures created a chasm between the curious and the members of the hermandad; pesky voyeurs and writers wanting information prompted the Hermanos to keep crowds away by using sling shots and rifles. The first portable cameras allowed tourists and reporters to publish photographs such as those in a shocking yet enticing newspaper article in 1900 in the San Francisco Call entitled “American Citizens Who Are Hanged Upon Crosses.”

In her 1912 novel Death Comes for the Archbishop, Willa Cather took literary license to write of “the bloody rites of the Penitentes,” introducing the ubiquitous blood and gore of New Mexicans into the minds of Americans.

The arrival of new American priests to New Mexico ended the fusion of Spanish traditions, the rituals of the Penitentes, and Holy Week liturgical rites. The already clandestine hermandad participated, for the most part, outside of the Lenten parish schedules. Villagers began to withdraw from the moradas. The Hermanos’ desire for privacy was misinterpreted as secrecy, and became part of the custom of each local morada.

Modern media, including film, added to the mystery of the Penitentes. Slowly, sensitive modern historical and anthropological research are helping to heal the wounds of the present-day vibrant Hermanos, and their 200 years of history within the annals of Catholic New Mexico.