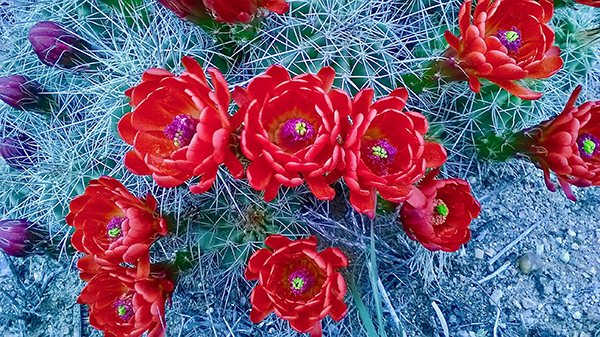 Your overt juxtaposition of skin lacerating
aggression and soul captivating lushness
is an approach-avoidance dance.
I cannot resist your improbable
gesture of seduction.

The waxy texture of your thick petals
shines with a plasticized gleam even
in the partial overcast of a monsoon sky.

I desire to touch your round red velvet beds
designed to besot pollinators,
blooming as a brazen boudoir metaphor,
hovering too close over a discouraging
mesh of razor sharp spines.

In the spare underbrush, you paint
this sage green desert forest
of skinny piñon, alligator juniper,
and high rise ponderosa pine
with a scarlet exclamation
of fantastical frivolity.

Up on the Trail of the Mountain Spirits,
on the edge of the ancient caldera,
with a foreground of fresh snow, the piñons
capped in glittering crystals, accent the landscape,
between juniper and tall-trunked ponderosa pines.

One gnarled piñon stands in elegance with dark barked
limbs gesturing westward. I wait for a sunburst to highlight
this pristine scene, but the indigo sky is committed to its somber
Rembrandt hues. The hushing light holds the day in limbo,
no indication of the passing of hours. The tree stands regal,
a sentinel to all of its long seasons, its hundred harvests
of nutritious nuts pecked at by hungry nuthatches
and stashed away under dry dirt by Mexican jays.

It takes a powerful wind to set these stout piñons into motion.
At this moment, the usually incessant jet stream is still.
The tree’s aged limbs remain in repose. It stands solo.
No juniper boughs intermingle with its needled outreach.
A lone piñon seems out of ecotone, and so an emissary of an unusual grace,
its shape unhampered, unobscured, like an ancient, well-tended bonsai,
a Zen sentinel atop this rocky slope covered in powered white winter.

Impersonating a stone with your sepia toned scales
you soak in sun, bask in radiant warmth of dusty soil.

I only see you when you scurry to miss my descending boot.
You sprint, halt a few feet away. Luckily for both of us,
you need not spray odiferous blood
from your slit eyes. You are not my prey.

Wide flattened back, dark burnt sienna markings
on your turtle shell shape, you blend into the landscape
with eons of evolutionary skill. I stand still.

You return to your primordial predisposition to loaf,
a lounge lizard, all the while eyes vigilant
in continual surveillance of potential predatory intention.

After many days of my hiking this winding trail,
you no longer scramble as I pass your favorite day spa
in respectful distance, not setting off instinctual alarms.
You now know that you can afford to ignore me.

There is something comical in your toady appearance,
but you will have the last laugh. That hint of Ankylosaurus
in your sturdy feet, scaled back, and horned head speaks volumes.
No doubt, your lineage will far outlast my own.

Her image welcomes you from a past millennium.
A greeting from the concave inner surface of a bowl.
Her face, arms, and hands are beige negative images
created by the painted clay-red background.

Her own round bowl sits before her, eclipses her body
with geometric lines spanning like lightning bolts,
east and west. Black hatch lines, north and south.

Her face and hands are upward turned,
as if offering this vessel of art and purpose to the sky.

Her mouth is neutral in expression,
emotions unable to be read, as elusive
as the ancient history of her agricultural people,
who filled the Mimbres Valley and the Mogollon
with over a hundred villages, and whose stories
are known only through these bowls.

These bowls with their mysterious center holes,
broken it is believed to release the spirits
of their makers to the next world, but just a theory.

These bowls with their remarkably modern,
stylized patterns of insects, turtles, deer, fish,
hunters and fishermen, Escher-like geometric
patterns, and, oh, the rabbits! The rabbits!
The long-legged skinny jacks!

In one bowl, a black and white striped clown Koshari
indicates its maker believed in Kachina spirits.
Perhaps she was a decedent of the ancient pueblo peoples
who fled south after the fall of Chaco, and still further south,
into what is now northern Mexico, but just a theory.

So many interpretations. So many theories.

For now, I am satisfied to look back by looking inside.
In this small Mimbres bowl, the painted outline of a hand,
no different than my own, reaches for sustenance, for affection,
for knowledge of the world, of the heart, of the cosmos.

Eve West Bessier is poet laureate of Silver City, New Mexico. She is a retired social scientist and voice coach. Eve is a jazz vocalist, visual artist, and nature enthusiast. Her website is: jazzpoeteve.com

To aid first contact, one need only the herb’s yellow flowers. Blanch them in holy water, then air-dry for prior to mashing. Next, carve a wooden stake from red cedar. Christen the stake with fire and smoke before coating the tip with the pulp mixture. Wrap the stake in black cloth and place under the bed of the deceased for three days. At midnight of third day, drive the stake into the grave where the beloved’s heart might lay six feet below. Look for the first signs over the coming days while continuing to pray ceaselessly as before.

Youre in the first hit of
cedar burning

as well name everyone and

up with the whiskey voice

Is that yours too

thousand I lose count of the souls

flying in and out

I miss the sun

Maybe even more than the moon

comes to feed me then tells

me to look at my hands

she says Look at them

Who else knows I wonder how

Plus I still have the letter

to the bishop you

Part of me cuts the words up

At night if you stand

But if you fly up high

litter the ground of every life we survive

Now sing the mind stores some

but the body houses all

Sing these things in Spanish

Sing them nonstop if you can but

do so only crawling end

to end across the valley floor

This time coming from the well

What I needed most is

or I drowned in blackbirds too

and still I thirst

I wonder will come nightly

to visit my ashes

Or some baby blue priestess

Tommy Archuleta is a mental health counselor for the New Mexico Corrections Department. He lives and writes on the Cochiti Reservation. His work has appeared in Pleiades, The Laurel Review, Snapdragon, Guesthouse, and the Poem-a-Day series sponsored by the Academy of American Poets. The pieces here are from Archuleta’s in-progress book-length poem titled Susto (Spanish for fright, shock).