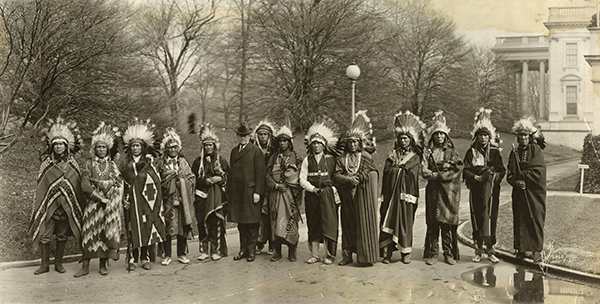 With the relative newness of statehood against a backdrop of thousands of years of thriving Indigenous communities, the 1920s was a critical moment in time for New Mexico. State politics at the turn of the twentieth century were entrenched in assimilationist practices as evidenced by boarding schools where Native children were forcibly removed from their homelands to be “civilized” into good Americans. Further, the constant encroachment of settlers onto ancestral Indigenous lands served to break up and homogenize a sacred landscape.

In 1921, New Mexico Senator Holm Bursum introduced a bill into Congress that would have allowed non-Native people to claim ownership of Pueblo Indian lands based on residency.

In 1923, Pueblo Governors and tribal leadership traveled to Washington, D.C., to fight the Bursum Bill. This was a deliberate act of commitment and spirited determination among leadership to effectively lobby for the best interest of the Pueblos and future generations.

Featured in the above photo is the New Mexico delegation in Washington, with President Calvin Coolidge at center. Upon closer inspection of the Pueblo leaders in the photo, we see them carrying their canes of authority. In 1864, President Abraham Lincoln recognized Pueblo independence by bestowing silver-tipped canes to each Pueblo Nation. These canes symbolize sovereignty, and serve as a reminder of the recognition of a nation-to-nation status. From a Pueblo perspective, it is common to proudly carry these canes out in such historic times, as these hold the fingerprints and breath of leaders who came before.

A year after this photo was taken, President Coolidge signed the Indian Citizenship Act of 1924. This act granted full U.S. citizenship to the Indigenous peoples of the United States. The act was enacted partially in recognition of the thousands of Native Americans who served in the armed forces during World War I. Despite being granted U.S. citizenship, people of the New Mexico Pueblos were not granted the right to vote until 1948. Land use and connections to homelands are viewed in relation to Pueblo values and systems. Like in the 1920s, this continues to remain a contested notion. Nearly a hundred years after the defeat of the Bursum Bill, the fight of these Pueblo leaders continues to resonate with the current attacks on Chaco Canyon, Bears Ears, and many other sacred sites which Indigenous people hold dear.

Matthew J. Martinez (Ohkay Owingeh) is currently deputy director at the Museum of Indian Arts and Culture in Santa Fe, New Mexico. He received his PhD from the University of Minnesota (2008) in American studies, and has published in the areas of Pueblo Indian history.