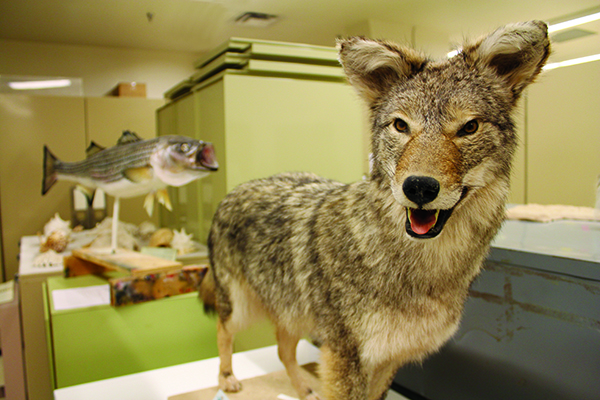 Larger specimens of more charismatic megafauna grace the tops of some cabinets in the collections of the New Mexico Museum of Natural History and Science, but it’s the smaller creatures—mice, rats, and bats, for example—that drive Jason Malaney’s work. Photograph by Charlotte Jusinski.

Growing up in Cimarron, New Mexico, Jason Malaney knew he enjoyed camping, hiking, and wildlife. When he arrived at college at Eastern New Mexico University, he discovered that love could become a career.

“I was a first-generation student,” Malaney says. “None of my family had been to university and I didn’t know what to expect. Everybody was like, ‘You want to be a doctor or a lawyer or something really up there.’” When he began taking introductory biology classes, though, he learned about wildlife management. “That hooked me into field biology, and I kind of tripped all over myself to get through graduate school, get more degrees, and that kept working out for me,” says Malaney, who went on to receive both a master’s degree and a PhD in biology. “Being outdoors was certainly a love, and finding out I could do some sort of career with it—I was in.”

His early interest in wildlife serves the current moment well, as the world grapples with the repercussions of the COVID-19 pandemic, believed to have spread to humans through bats. Such zoonotic diseases—hantavirus in the Southwest is another—require in-depth study and understanding of both the species and their changing ecosystems.

“It was always close to home, obviously, and being back close to family was important to my family,” he says, but it also matched more closely with his interests. “While I enjoyed academia, I’m much more of a field biologist; the field work is what I really, really love.” In academia, such field work is typically reserved for summers. Now, while Malaney still has academic endeavors and works regularly with students, his position “typically will allow me to be in the field quite a bit to meld both those worlds a lot more.”

The museum’s extensive Bioscience Collection includes thousands of mammals, mollusks, arthropods, and plants that represent New Mexico’s natural history, as well as hundreds of birds and reptiles. These specimens serve multiple purposes, as they are used in the museum’s exhibits, for education programs, and for scholarly research.

“The collections are the foundation of what we do,” Malaney says. “A lot of the show-and-tell that goes on—the outreach and education programs—they’re predicated on that foundation. Collections are the primary piece of the puzzle for us to be able to do all of those.”

While such programs are more visible aspects of the museum’s work, critical research projects stretch far beyond the museum’s walls to impact the larger ecological concerns of New Mexico, the Southwest, and beyond.

Currently, the museum has a grant from the U.S. Fish & Wildlife Service to perform population genomics for the New Mexico meadow jumping mouse—Zapus luteus luteus—which was designated as an endangered species in 2014, primarily due to habitat loss and fragmentation. Population genomics screens species’ DNA, looking for differences between populations in different locations to “understand how organisms are moving through the landscape and what impacts that has on their genetics,” Malaney explains.

As a result of modern technology—think super computers—this process has evolved to involve screening and analyzing massive amounts of data and allows scientists such as Malaney to look for adaptations across different populations of species that would have been invisible even a decade ago.

For example, he says, “We know that humans who live at higher elevations have a different profile in their blood” than those living at lower levels. “There’s a reason so many people train here in Albuquerque for the Olympics and MMA and for track and field,” he notes. “Folks come to the Southwest, and particularly New Mexico, they train at a mile high, adapt, and then they go and perform at sea level.”

In this particular project, Malaney is looking for similar adaptations, but among the jumping mouse. “We’re looking for those differences … at high elevations and low elevations,” for example, “or maybe there are different disease profiles: We have to find out what the diseases are, relate those genomics back. There are a lot of different ways in which we can explore and test for population-level differences that would maybe relate to adaptions now that we couldn’t do a decade ago, even though we knew they were there.”

Such discoveries can then help inform strategies for conservation. “If there are differences among those populations, then that would perhaps have those implications at a management level where you want to manage those populations that have certain adaptions,” Malaney says.

The work also marries new technology with much older practices. Because the jumping mouse is endangered, field work would not necessarily be an appropriate way to collect specimens. Instead, the science team relies on museum specimens.

“Museum specimens are like library books that you can use over and over again,” Malaney says. “We have this huge resource in the form of museums that enables us to do this sort of research without having to go to the field.” While contemporary understanding of DNA dates to the late 1940s, the process of specimen preservation has happened for hundreds of years.

“We’ve been preserving specimens all the way back through Darwin into the 1800s,” Malaney says. Now, “we can pull DNA out of those specimens, and it allows us to leverage new technologies from those older specimens and ask these new questions that we couldn’t even begin to address a decade ago.”

While the physical specimens are invaluable in such work, a second project involves digitizing them and putting together a public database. That project—Arctos—is an open-source collaborative effort across natural history museums to provide research-grade data for more than three million records.

“It allows all of our specimen data to be publicly available and web accessible,” Malaney says. “So, if I’m in Mongolia working on a project, for example, I can pull up any of the specimen records we have for a specific species on my phone.”

The first phase of the project involves collating information about the specimens—localities, dates, and measurements, for example. A second phase, which was stalled by COVID-19 and lack of access to the museums, will entail photographing specimens in both 2 and 3D. In the spring, Malaney was writing grants to leverage the database and digitized specimens to create educational modules.

“We’ll develop a few tutorials and education modules and hopefully turn it into a system by which students can generate their own sorts of data and questions and analyses,” he says.

In addition to those funded projects, Malaney and his team also are working to secure grants for a long-term climate monitoring project, which will seek to monitor changes to local populations as a result of climate change. For example: “Are they more susceptible to things like carrying viruses?”

That question, obviously, carries weight during the COVID-19 pandemic, but has had implications for decades in the past and will continue to be a key inquiry going forward. Climate change, impacts on species’ habitats, and increasing contact between humans and mammals all play a role in the emergence of zoonotic diseases. In the case of COVID-19, the novel coronavirus is believed to have originated with a bat that came into contact with an animal sold in a wet market in China. But these types of diseases also have emerged much closer to home. Hantavirus spreads through rodents, and first appeared in 1993 in several states in the Southwest, including New Mexico.

“COVID-19 seems kind of foreign and it arrived in our backyard and there’s a lot of political rhetoric,” Malaney says, “but the point is, it’s not always that way; it’s all of our backyards.” Hantavirus, he says, “doesn’t get as much of the big fanfare, or publication in the media as it did on our first outbreak, but it continues to occur every few years.”

Those occurrences respond directly to increased precipitation following El Niño weather patterns, just one example of how climate change and human behavior all intersect to create events in the natural environment such as pathogens and parasites.

“As humans alter landscapes or infiltrate into wild areas, this is where these [diseases] are coming from,” Malaney says. “That’s where we’re getting things like SARS and MERS and Ebola; it’s a pretty grim list, and it’s the same story.”

While the story is grim, natural history museums such as New Mexico’s play a key role in telling it and advancing the science to help understand it. Malaney says the museum hopes to continue building out programs and outreach to showcase its behind-the-scenes research initiatives. “Almost everything that we deal with in my lab and in my research and career has been related to conservation and management,” he says. “The cool thing about museums is museums are really critical to unpacking that story and unraveling what is going on.

Julia Goldberg is a journalist and teacher in Santa Fe, New Mexico, as well as the author of Inside Story: Everyone’s Guide to Reporting and Writing Creative Nonfiction.