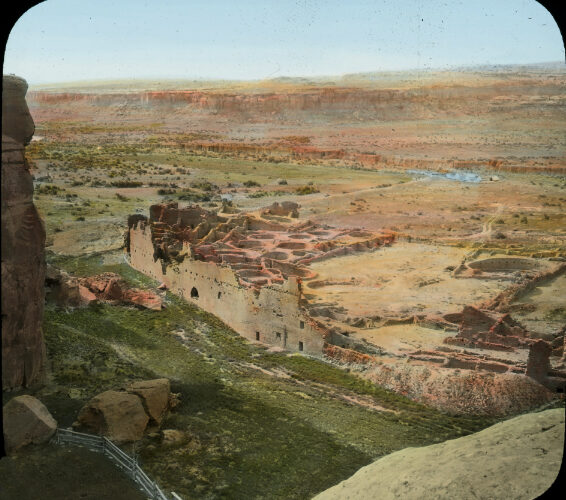 My connection to sacred space and topography, including places like Wáphra’ba’shúka (Chaco Canyon), begins before birth, through many generations of ancestors whose prayers established the foundation for this distinct affinity. The bloodline of those who settled and engaged with the vast hallowed landscape is the same blood that runs through my own being as an Acoma man, in this present time. The migration of my bloodline from the time of creation and emergence provides me and other descendants of Chaco with a context for identity and understanding of contemporary Pueblo culture. Further, this connection extends to the sky above, the oceans, and the depths of our Earth Mother.

I recently returned from a trip to Kásh’kútruti (Mesa Verde National Park) where, along with three other Pueblo tribes, we reburied ancestors who were removed from their final places of rest within this sacred and vast cultural landscape 130 years ago in the name of Western science and privilege. I could not help but think about who they were. I wanted to acknowledge them by name or by any relation I may have had through clan and kinship. I wondered about their age—if they were young, anticipating the migration to places like Chaco Canyon. I could only refer to them as my elders and offer the utmost respect as they were placed carefully in a new grave along with their funerary items. What I do know is that we were of the same blood, and that we reconnected during the solemn and gut-wrenching observance. Under the bright sun of that early Sunday morning, my ancestors and I created a new sacred space, and I prayed and ensured them that I would call upon their spirits for protection of all people and guidance in the collective work to repatriate other ancestors, and to protect Mesa Verde and other ancestral homelands.

I am often asked to speak on the connection the Pueblo of Acoma has to ancestral homelands like Chaco Canyon. Since as early as the mid-1990’s, I have been invited to engage with non-Native American scholars and others, the “experts,” on initiatives that ultimately advance their own research about ancestral Pueblo culture. Many of these projects did not include consultation with descendant communities, nor did they provide any direct benefit to Acoma and other tribes.

I am always very selective and cautious when fielding these opportunities, as some lead to inquiry that attempts to extract esoteric information. In my early years, I learned about these crafty attempts the hard way. The Native American Graves Protection and Repatriation Act (NAGPRA) of 1990, a policy enacted by the United States Congress designed with the ambitious intent to repatriate collections of Native American human remains, associated funerary objects, and objects of cultural patrimony (and a provision for protection of eagle feathers), provided me with an introduction to the complexity of federal processes as well as challenges within my own Acoma community where access to traditional knowledge and history were concerned.

This introduction did not come with any formal training or education in the field of archaeology, anthropology, museum studies, or law; rather, I was a 23-year-old college student studying marketing at New Mexico State University in Las Cruces, called back to Acoma to fulfill an appointment by cultural leaders to serve as a tribal official for the term of one year. The experience I had as a tribal leader for three consecutive years, rather than the one-year term, had a significant influence on the way in which my own career interests would shift and instead focus on becoming a steward of traditional Acoma knowledge and history associated with ancestral Pueblo landscapes. Moreover, my own upbringing and teachings provided by my maternal great-grandfather, clan uncles, paternal grandfather, my own father, and many tribal elders and cultural leaders helped me to cultivate a stronger understanding and acceptance of my inherent responsibility to be a good caretaker of the great intellectual property of my bloodline, my ancestors.

The initial implementation of NAGPRA included my involvement in the review of the first inventories received from various institutions throughout the country and participation in the mandated provision for tribal consultation. Those who worked alongside me and other tribal leaders called upon the oral history and personal experiences shared by our elders to help us navigate the new federal policy and its process so that we might repatriate ancestors, their funerary items, and sacred materials (objects of cultural patrimony), many of which were taken from Chaco Canyon. This experience presented the immediate need to work cooperatively with federal agencies and institutional representatives to gain access to collections, have the “upper hand” where cultural affinity claims were concerned, and to establish control over the repatriation process.

The same teachings also provided us an advantage in terms of establishing limitations where information sharing was concerned. The “burden of proof” provision in the law, however, was our biggest challenge, as this often presented pressure to divulge culturally sensitive information in order to substantiate an affinity claim to objects in a collection. Attempts by repatriating institutions and federal agency officials to obtain detailed information as to why an object or the remains of ancestors were sacred was insulting and demeaning.

Those early experiences, as difficult as they were, did result in successful repatriation (among other outcomes), which ensured the protection of Acoma’s traditional knowledge, and ultimately helped to improve federal processes. The work is ongoing, and many individuals from Acoma and other tribes throughout the country have contributed greatly towards strengthening and advancing repatriation efforts beyond NAGPRA. Moreover, this work has directly influenced our ongoing commitment to safeguard not only all materials protected under NAGPRA, but the sacred places from which they originate.

A leader in the movement to protect cultural resources on the Southwest’s vast landscape, Acoma and other tribes throughout the country have established capacity and are committed to the development and implementation of our own strategies for the protection and preservation of sacred places that remain integral to the continuance of the bloodline which connects us. The active engagement of Acoma knowledge keepers, Tribal Historic Preservation Officers, tribal leaders, Acoma scholars, young Acoma people, and the many friends of the Pueblo who have stepped forward to assist us in this most important work ensures a meaningful and relevant process for addressing these often difficult initiatives, especially when federal policy and government agendas are not always in alignment with our Pueblo core values.

Nonetheless, we move forward with full control over parameters for data sharing, consultation, and asserting our sovereignty. This, in itself, is a sacred process.

I was asked to write about how and why Chaco Canyon is sacred to Pueblo people. First, I would never speak on behalf of other Pueblo tribes. Secondly, when I accept an invitation to speak or am presented with the opportunity to participate in projects involving Chaco Canyon, I always share information that I hope is useful in shaping a better understanding among others of the complexity of the Acoma narrative in relation to our connections to Chaco and other settlements of our ancestors.

I enjoy sharing stories and the experiences I have had in my young life that influenced my own understanding of these special connections. My career in historic preservation has also afforded me great opportunities to be actively engaged in protecting cultural resources. During presentations, I will often make the ever-annoying (to some non-Native participants, anyway) minimal references to ongoing cultural practices like pilgrimage, songs, prayers, oral history, architecture, material culture, and agriculture—all vital to recognizing our lineage to Chaco. I suppose that during any future public presentations, I will allude to these concepts in hopes of an acknowledgement of this great living connection of Governor Vallo and his people to the ancestors and cultural landscape of Chaco Canyon.

Ultimately, however, the desire of Acoma people is to remain steadfast in sharing Indigenous knowledge, values, and contemporary lived experiences about Wáphra’ba’shúka to our young people so as to ensure respect and understanding of the connection to the bloodline of our ancestors. Doing so will guarantee the perpetuation of Chaco culture in future generations.

A former resident of Santa Fe, Governor Brian D. Vallo served as director of the Indian Arts Research Center at the School for Advanced Research and as a member of the Santa Fe Arts Commission, Santa Fe Community Foundation Board of Directors, and Chamiza Foundation. He is currently the governor of the Pueblo of Acoma.