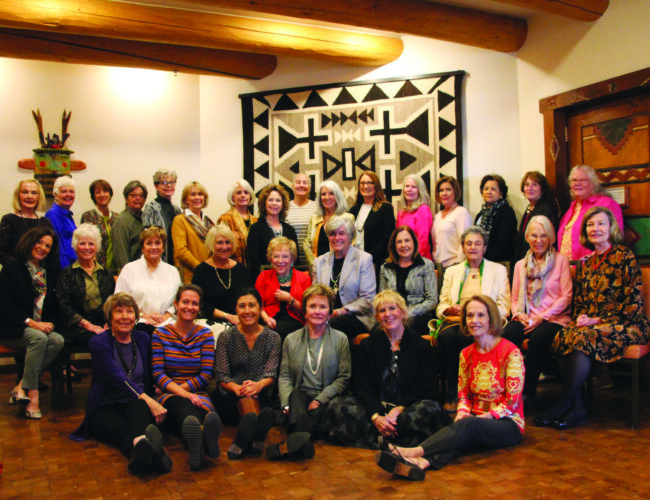 Historically, visitors to the Museum of New Mexico’s four museums in Santa Fe have enjoyed tasteful receptions hosted by the Women’s Board featuring impeccable hors d’oeuvres trays and colorful punch bowls. This hospitable group is integral to the public’s perception of Santa Fe’s museums and had plans for a lively celebration of its 110th anniversary earlier this year—which were then cancelled due to COVID-19. Instead, grab a glass of punch and a delicious snack at home to toast the Women’s Board of the Museum of New Mexico’s 110 years of dedicated service.

The Territorial Legislature chartered the Museum of New Mexico on February 19, 1909, to be housed in the Palace of the Governors under the direction of Edgar Lee Hewett. A little over a year later, Judge John R. McFie announced at a meeting of the Santa Fe Archaeological Society the formation of a Women’s Auxiliary Committee. The role of this group, and other similar organizations of the time, was to “aid in the organization and maintain an interest in the work of the Museum of New Mexico and the American Archaeological Society.” The Puye Room at the Palace of the Governors was designated as their meeting room, and the first meeting of the Women’s Auxiliary Committee was held on April 15, 1910. Their first official duty was to host a reception for the formal opening of “The Museum of Archaeology in the Old Palace” on August 20, 1910. Their reception was the lead of the front-page article in that day’s Santa Fe New Mexican.

The Women’s Auxiliary Committee was officially renamed the Women’s Board of the School of American Research and the Museum of New Mexico on March 24, 1917, and given a new permanent home on the second floor of the soon-to-be-completed New Museum, as it was then called—today known as the New Mexico Museum of Art. When the museum opened in November of 1917, the Women’s Board rooms (which took up virtually the entire second floor) had been designed by its members to be a social gathering place and reception hall; some of the original furnishings are still in the Women’s Board Room Gallery today. According to Susan Mayer’s 1986 history of the Women’s Board, the formalized function of the group was “especially to perpetuate the traditional hospitality of Santa Fe and to use the resources of the School and Museum in the public services which are the particular province of women.”

The Women’s Board, 110 years after its founding, still fulfills this mission. It has, since the opening of that first exhibition at the Palace of the Governors in 1910, provided gracious, delicious, creative hospitality for Museum of New Mexico exhibition openings and preview events.

Things have changed since 1910; most notably, the number of museums, exhibitions, and audiences has grown. Over the years, the spaces on the second floor of the art museum have been thoroughly converted to exhibition spaces, but the homey feel of the central gallery reflects some of the original ambience designed by the members of the Women’s Board back in 1917. In the renovations of the early 1980s, the museum’s New Wing Galleries were added (along with extensive underground art storage and office spaces), and the kitchen adjacent to the Women’s Board rooms was removed.

For many years, the wives of the sitting governors of New Mexico were active members of the Women’s Board during their husbands’ tenure. The Women’s Board also has a long tradition of hosting an inaugural reception for New Mexico governors at the State Capitol. On January 2, 1967, Roberta Brosseau wrote a detailed report of the reception she chaired for the inauguration of Governor David Cargo on January 1. Among her suggestions for future receptions were practical items like, “If the reception is held in the Palace of the Governors again, it is imperative that heat be installed in the working area.” She also reflected a certain resignation to how things operate in the museums generally: “Check to see that there are receptacles in which to place used cups. Mrs. Frank donated several attractive plastic trash cans which were to have been kept in the Women’s Board room, but I believe they have been absorbed into the Museum.” Over the years, inaugural receptions have been hosted by the Women’s Board at the Palace of the Governors, at the New Mexico Museum of Art and, in 2019, the inaugural reception for Governor Michelle Lujan Grisham was held at the Santa Fe Community Convention Center.

The receptions of the Women’s Board are sometimes close to alchemy. The platters are beautifully prepared in a variety of out-of-the-way spaces and then brought to the serving tables. Each museum has a kitchen where supplies are washed and dried at the end of the reception, and everyone knows to be careful to have your cell phone with you at the Museum of Art, in case you get stuck in the elevator or—as has happened at least once—locked in the building at the end of a reception.

Today, the Women’s Board maintains a closet of supplies in each of the four museums it serves (the New Mexico History Museum, the New Mexico Museum of Art, the Museum of Indian Arts and Culture, and the Museum of International Folk Art). In the past few years, it has also been involved in designing a storage space in the soon-to-open Vladem Contemporary annex, part of the Museum of Art. Each closet is a treasure trove of trays, punch bowls, table runners, cups, and napkins. There is a protocol for receptions handed down from veterans to new members. Trays on the serving table are replenished and refreshed repeatedly, and punch is always poured for guests.

The Women’s Board is somewhat famous for its creative punches. Associate member Kay Lewis recalls, “We were hosting an art museum opening and I was brand new; we had a lot more guests in the courtyard than anticipated. Those were the days when wine was served in the punch bowls with ice. My instructions were to pour several bottles into the bowl, but I pointed out there were three different varietals. The reception chair’s answer was to stir them all together as no one would know the difference—and she was absolutely right, and there were no comments or complaints.”

Just as the scale and size of reception attendance forced the shift in the 1980s from china teacups to plastic cups, a growing awareness of our impact on the environment has encouraged a shift away from plastic to paper goods. As co-chair of the House Committee Linda Smith recently recalled, “Here is one conversation that encouraged our move away from plastic.

Gentleman with an attitude: ‘So, ah, where is your recycle bin?’
Me: ‘Oh, I’m sorry sir. We don’t have a recycle bin, but you could put your cup in the trash can against the wall.’
He: ‘Seriously? The museum doesn’t recycle? You really need to change that and not put all this plastic in the landfill. I’ve been recycling for years. This is Santa Fe. We are environmentally conscious here.’
Me: (smiling politely) ‘Oh, that’s wonderful. Perhaps you’d like to take that cup with you to add to your recyclables?’

With that, he walked directly to the trash can, exclaiming ‘Well, not tonight!’ However, he got me thinking about changing over from plastic to paper, and any new purchases going forward will be paper products. The Women’s Board may be 110 years old, but we can get with the program!”

New, younger members encouraged the Women’s Board to establish a web presence, and a website was launched in the last few years (nmwomensboard.org). An endowment fund at the Museum of New Mexico Foundation will support the membership of the Women’s Board for the next 100 years.

In this COVID-19 era, the Women’s Board has had to adapt in other ways, including quarterly meetings held over Zoom, and the sad inability to fulfill its primary function as hostesses for the museums. The Women’s Board has played host to royalty at least twice in the last 110 years as Princess Anne and her brother, Prince Charles, of the United Kingdom each separately visited Santa Fe in 1982—but the board has always hosted the general public as graciously as the distinguished visitors, artists, writers, politicians, and scholars.
—

Ellen Zieselman was the curator of education at the New Mexico Museum of Art for twenty-five years. She is currently first vice president of the Women’s Board.