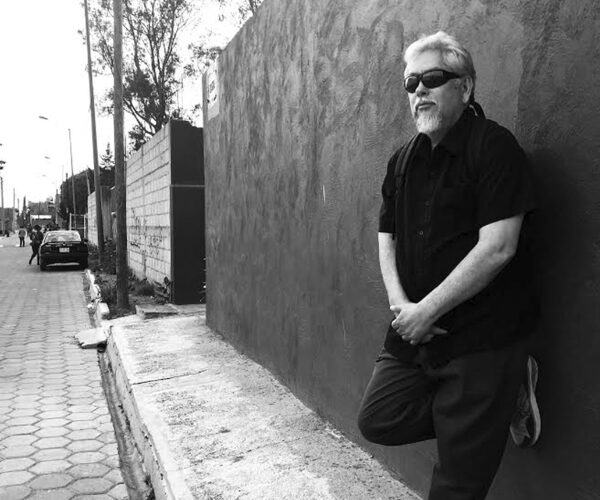 The first thing you notice when you meet Levi Romero is his tremendous generosity of spirit. He is nuevomexicano, born and raised in the state; and he personifies the open-hearted nature of New Mexican culture. This is a place where strangers wave to each other and smiles are abundant. In our modern, fast-paced society, that kind of courtesy is perhaps no longer the norm—possibly due to our lack of deep connection with the place in which we live. Many of us have become distanced from our histories and sense of community.

Helping people reconnect with their own history and community is part of Romero’s goal as state poet laureate. He talks about the essential connection between place and identity in Querencia: Reflections on the New Mexico Homeland, a 2020 anthology he co-edited. “I speak of querencia from an experience embedded in an upbringing among close-knit relations,” he says. “For me, querencia is not only personal; it is communal and deeply connected to the people and place where I was raised, mi gente, mi pueblito.” He explains, “No matter where I find myself, the arrow of my internal compass always points toward my ancestral home, where my cultural and spiritual point of reference originates.”

That ancestral home is Dixon, El Puesto del Embudo de San Antonio, on the Embudo River south of Taos. His world view, his locura, was shaped there. It was influenced by his close relationship with his grandmother, who played harmonica and told cuentos on the porch in the evenings. It was influ- enced by cruising in lowriders with his older cousins. It was shaped by the land itself and by La Academia de La Nueva Raza, the land-based organization headquartered in his great-grandmother’s house, dedicated to preserving cultural traditions by engaging community activism and collecting oral historias.

“New Mexico is a place where stories and the oral tradition are so vital to how we sustain ourselves,” Romero says.

His own story is a river with many tributaries. He received his bachelor’s and master’s degrees in architecture from the University of New Mexico, and is now a professional architect. While studying architecture, Romero took a writing workshop taught by Luci Tapahonso, inaugural poet laureate of the Navajo Nation. The experience brought his writing out of seclusion and into public expression. He was never a full-fledged member of Burque’s slam poetry movement, but honors the oral tradition that it upholds. His work is representative of the spoken- and written-word traditions, and finds his community in both spaces.

Romero was invited to be a lecturer in the creative writing program at UNM and taught there for five years. He then taught in the School of Architecture and Planning for another five. He is now an assistant professor in the Chicana and Chicano Studies Department. Romero has managed to weave together a life expressing his love of Chicanx culture, storytelling, poetry, and architecture, and has merged his various backgrounds into a cultural landscapes language that evokes its own type of narrative. He speaks about being an architect and builder of both physical and linguistic structures. He loves working with adobe; it’s an earthen material and hand-shaped, so you have to move the bricks around to find which ones fit together as you create the structure. In writing, Romero sees a similar process.

“You’re moving things around. You’re thinking, ‘I love that image but it doesn’t fit this poem, it’s for another poem.’”

Romero enjoys this intuitive puzzling to create the perfect poetic structure. He also loves sharing that process with others, helping them tell their stories and build strong poems.

In his first year as state poet laureate, Romero originally planned to visit all thirty-three counties and bring writers together—but the pandemic made this impossible. So, he has used Zoom and Facebook to gather people and promote poetry. He’s co-hosted online poetry readings with the poets laureate of three cities: in Albuquerque with Michelle Otero, in Taos with Catherine Strisik, and in Silver City with me. Romero is also posting poems, especially by emerging writers, on his Facebook page. This coming year, he will be collecting work for a New Mexican poetry anthology.

Romero’s primary objective as laureate is to be a steward of stories, providing a conduit for the river of cultural meaning to flow like a Rio Grande of vibrant language.

“People are naturally poetic,” he says. “They have the poetry inside themselves.”

Romero feels his job is to recognize this, help bring that poetry to the surface, and then get out of the way, giving the stage to other voices telling their stories.

Levi Romero’s dedication to these poetic cuentos is a joyous expression of his adventurous nature. Whether riding his Harley, savoring an excursion in a lowrider with brilliant chrome, or delving into the ever-fascinating landscapes of place and culture, he is always an explorer in search and support of our interwoven historias.
—

A bulto of Santo Niño on the nightstand

The beloved safe-keeper of infants and children

Propped up by their spines
A row of books supporting each
other Two book jackets Caramelo
and
Underground: My Life with SDS and the Weathermen
Orphaned and sandwiched between una biblia and books long ago half-read
Whose titles keep open the doors of procrastination

Magazines thumbed through
Saved for what purpose?

An opened envelope with two photographs

A For-The-Love-Of-Lavender pouch gifted from a friend

Eve West Bessier is poet laureate of Silver City, New Mexico. She is a retired social scientist and voice coach. Eve is a jazz vocalist, visual artist, and nature enthusiast. Her website is jazzpoeteve.com.