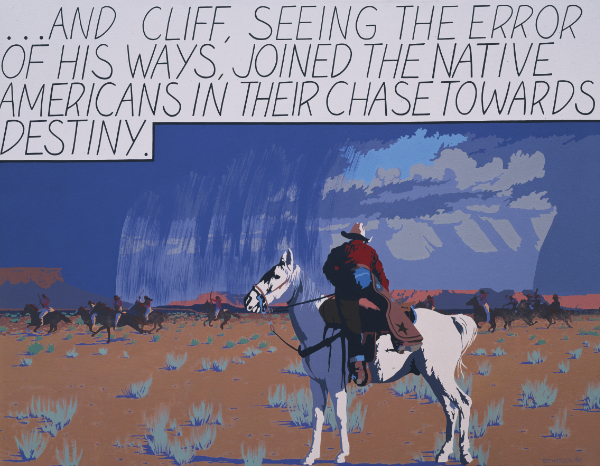 Whenever Billy Schenck came by Elaine Horwitch’s gallery in Santa Fe, the whole staff stopped what they were doing to talk to the handsome cowboy painter.

Wearing his beat-up old cowboy boots and with a bandana always hanging out of the back pocket of his blue jeans, Schenck cut quite the figure amidst the refined Santa Fe art world. At the time, Schenck was known to bring some of his larger paintings to the gallery in his horse trailer, requiring one to navigate horse manure while unloading. “As far as I know, he still does that,” says Julie Sasse, chief curator at the Tucson Museum of Art and author of the new book Southwest Rising: Contemporary Art and the Legacy of Elaine Horwitch, excerpted here.

Schenck’s paintings, much like the man himself, reflect images of the Old West, with all its romance and conflict. It was in the late seventies that he started applying his signature paint-by-numbers style to the landscape of the American West, a pop art technique that he still employs today. In some later paintings such as Cliff, he began including text, a gesture towards Lichtenstein’s comic-book aesthetic—one which Horwitch found overly critical and too tongue-in-cheek.

Although they were friends, the professional component of Schenck and Horwitch’s relationship wasn’t always smooth sailing. They often sparred over sales percentages, especially after Schenck got some national notoriety and wanted a better deal than the typical sixty-forty dealer-artist percentages on his works. Horwitch was a notoriously tough negotiator, and butted heads with more than a few of the artists she worked with.

To gather source material for his paintings, Schenck travelled all over the Southwest photographing the landscape and the people. Often, many landscapes were synergized in the final product, as in Cliff, which Schenck says  depicts “part Wyoming, part Arizona, and part pure imagination.” By the seventies he was deeply in love with the region, and was one of the first to encourage Horwitch to open a gallery in Santa Fe.

Schenck split his time between Scottsdale, Arizona, and Jackson Hole, Wyoming, for most of the seventies and eighties before he bought a house in La Cienega, New Mexico, in 1997. He purchased the home, where he still lives with his wife Rebecca, from the landscape architect and writer J.B. Jackson, who published the highly influential magazine Landscape from 1951 to 1968. Schenck, who has won several awards at local and national rodeo competitions, keeps a small ranch at his La Cienega property, where he can still be found practicing team penning in his beat-up old cowboy boots.
—

Robin Babb is a writer and the copy editor of El Palacio. She owns Harvest Moon Books, an independent bookshop in Albuquerque.