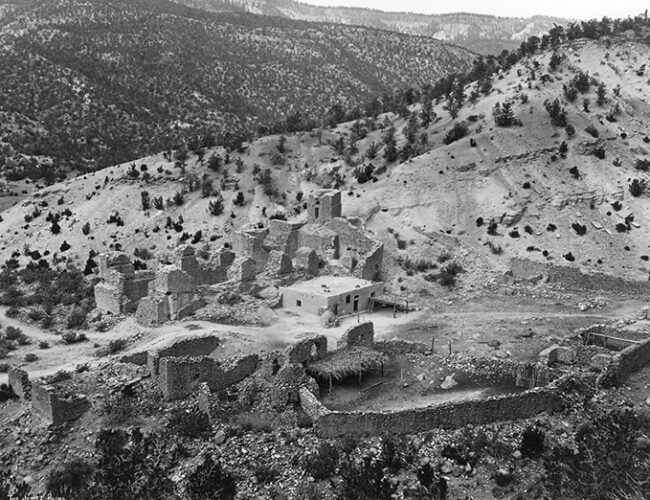 John K. Hillers, a German immigrant, became one of the greatest photographers of the American West. After serving in the Civil War he was hired as a general worker for the second Powell Expedition of the Grand Canyon in 1872.

When the two photographers on the expedition left, he was made chief photographer. Armed with only the rudiments of photography, he quickly excelled in the role and won the deep friendship of Powell. Hillers went on to produce a large body of superb photographs documenting the American landscape and the American Indian. The Palace of the Governors Photo Archives holds a small collection of his prints.

San José de los Jémez Mission was built in 1621 and may have been occupied until the Pueblo Revolt of 1680. This photograph depicts the mission as it stood in 1880. It and the surrounding ancestral Jemez Pueblo of Giusewa are preserved today as Jemez Historic Site. First occupied in the fourteenth century, Giusewa was among the largest Jemez villages at the time of Spanish colonization in 1598.

As Hillers’s photograph shows, Jemez Historic Site was never really abandoned. Shot from the top of a ridge to the southeast of the mission, the picture shows a one-story house built into parts of the sacristy and a portion of the storeroom being used to house livestock. Tree-ring dates suggest this house was built in 1866, and archival documents note that the Toledo family of Jemez Pueblo lived in the structure during much of the late nineteenth century.

Daniel Kosharek is photo curator at the Photo Archives of the New Mexico History Museum/Palace of the Governors. Matthew J. Barbour is the manager of Jemez Historic Site in Jemez Springs, New Mexico.