Topics > My Perspective > Stories to Tell 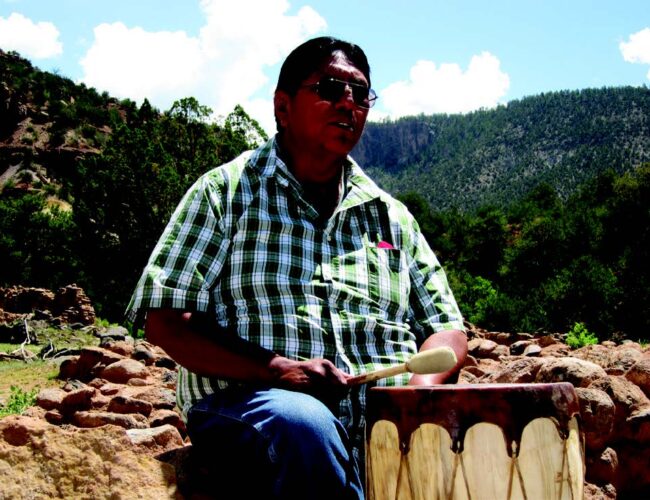 Dreams come true. Certainly mine did. In early 2013, I took over as manager of Jemez Historic Site. Now my job is to tell its story. I educate the public and preserve for the citizens of New Mexico and elsewhere one of the most remarkable historic sites in the country.

Known as Giusewatowa, or “hot water place,” to the Jemez People, Jemez Historic Site contains a Native American pueblo and Spanish mission, which together date from the fourteenth to the eighteenth centuries.

It is a privilege to work here. In some ways, it is a dream vacation. I work among some of the most visually stunning ruins and mountain vistas imaginable. The job requires me to attend feast day dances and promote the site to special-interest groups by giving lectures and writing articles. During my lunch breaks, I have the opportunity to hike among ponderosas and junipers or catch a bite to eat at the swanky little restaurants in Jemez Springs. Some people have all the luck.

Don’t get me wrong, I earned it. It took a lot of hard work and a long road to get to Jemez. Both my undergraduate and graduate degrees in anthropology focused on contact-period archaeology, and I had been employed for over a decade with the Office of Archaeological Studies, an agency of the Department of Cultural Affairs, when I applied for the position. I spent years excavating and writing on Native American and Euroamerican archaeological sites throughout New Mexico. I even got awards for my work.

A lot of the opportunity was due to good mentorship. I have had some great influences through the years. Stephen Post and Regge Wiseman at OAS were both big role models. They still are. Then there were the professors that schooled me in the American Southwest: Dick Chapman, Bruce Huckell, and Ann Ramenofsky.

Ann was the one who drove me to take an interest in the Jemez area and the Jemez People. She inspired in me a love of contact-period archaeology and encouraged me to work with

Mike Bremer and Jeremy Kulishek at the Santa Fe National Forest. Under their guidance, I became familiar with the history and archaeology of the Jemez Mountains.

If you can imagine it, Spanish accounts tell of a population of 30,000 Jemez people living in the mountains in the late 1500s. The Jemez Springs area was among the most densely populated regions in New Mexico at the time of Spanish colonization. However, by the early 1700s, the number was close to 300, a 99 percent decline in population over not too much more than a century. Disease, migration, and warfare had culminated in a nearly complete societal collapse. Yet, the Jemez remained. Culture and community intact, they weathered the most devastating storm imaginable and came out the other side as vibrant as ever.

Now, thanks to being named site manager by New Mexico Historic Sites director Richard Sims and Department of Cultural Affairs secretary Veronica Gonzales, I was at Jemez. The whole story of Giusewatowa, from the migration of the Jemez People into the valley, to the arrival of the Spanish priests, to the Pueblo Revolt of 1680, could be seen and told through the ruins. It was my story to tell, right? Wrong.

My lofty and exciting goals to tell this amazing tale of perseverance against all odds quickly met with the realities of the situation: the grass needed to be cut; walls needed to be plastered; bathrooms need to be cleaned. Worse, attendance was down, and operation costs continued to rise. Rather than shooting for the stars, I was faced with putting my head down and dealing with the nuts and bolts.

I did what I could. I gave lectures and tours to as many groups as possible. I wrote articles for newspapers and magazines. And I told stories, not always about population decline. Sometimes the story was of religious tolerance. It may have come as a surprise to the public to learn that Pueblo religion had not been pushed aside when Catholicism was thrust upon Jemez. Franciscan priests initially tried linking the various kachinas, or spirits, with particular saints. Jemez people tolerated the Christian God by accepting him into their pantheon, and it was only when their kachinas were banned that the seeds of a major uprising began to take hold.

It wasn’t like every visitor to the site was getting a personal tour with me or another ranger. Most were left with a trail guide. A good trail guide, mind you—but not a person. As a result, things get misinterpreted, and sometimes people become disengaged. A story is only as good as the storyteller, and the trail guide lacked the human element.

What Jemez Historic Site needed were more storytellers. The question then became, how do I get them? Increasing staff was impractical. Funding such needs was problematic. I still had all those other issues of site maintenance, all of which required money, too. A friends group was similarly impractical. Past attempts had failed. Whereas most museums are situated in large urban areas, Jemez Historic Site is far from any sizable city, without a large population of retired citizens to help.

Luckily, the answer was already there, in our name. Since the founding of Jemez Historic Site in the 1930s, it had always been recognized that Giusewatowa was ancestral to the Jemez People. The Jemez occupied the site for nearly 400 years and had only left the area because they were forced to do so under Spanish rule.

As a result, we started two annual programs. In 2012 we began Stories from the Land, a partnership which brought children from the Jemez Pueblo Community Library to the site for a week-long summer reading and writing program. While there, students and teachers shared stories of the site’s culture and upbringing with one another.

Then in 2014 we began the Elders in Residence Program. Made possible by a Small Historic Preservation Grant from the New Mexico Historic Preservation Division, the program allowed for six Jemez tribal elders to offer a Native American voice onsite in the interpretation and preservation of Jemez Historic Site to staff members and visitors, alike.

Many of the stories told by participants were deeply personal. Lawrence Toya, one of the elders in residence, spoke of his use of Towa words in his music and how he drew inspiration from Giusewatowa and the mountains. Andrea Fragua talked of her pottery and collecting her clays at Pecos, while Robert Shendo recalled his years in the service and his successes in the Senior Olympics. Their stories and others illustrate cultural perseverance and revitalization better than any history. When combined with the past, they connect the visitor not with an abandoned ruin, but with a thriving community. Collectively, it is a positive, if cautionary, tale of New Mexico history and the Jemez People.

Since Stories from the Land and the Elders in Residence Program were implemented, visitor attendance has begun to rebound; over the last year, it is up over 30 percent at Jemez Historic Site. Together, Jemez Historic Site and Jemez Pueblo are building an unbreakable partnership, demonstrated by the strong sense of ownership of and responsibility for the site by the Jemez People.

I still tell stories about Jemez Historic Site. I like to tell them, and I like to listen to them. But it isn’t just me. The visitor wants to hear stories, too. It is through stories that we connect with a place. It is how we learn. Fortunately for us, we have a community eager to teach us. As I said before, some people have all the luck.

Matt Barbour is the manager of Jemez Historic Site.