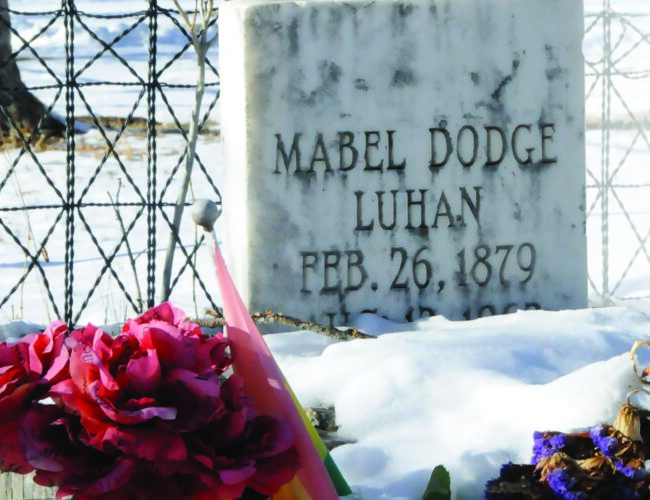 On my way into town, in a hurry, in a hat,
I pass the cemetery. The sun is brimming

with piled-on heat. I enter into the buried, the bandits.
Around me, names extracted from books.
I have stopped going to town, and now I am standing

deepened with weeds. Nothing trembling.
In the park amphitheater, women drum and dance,
raising hands as if measuring elevation. As if they see

past ravens, past leaves interlocked to cottonwood tops,
see over clouds. I step, no longer elsewhere,
but etched in the graveyard. At the back corner,
a lumped stone and a small altar. And still the throat
of the drum. On Mabel’s small grave,

synthetic petals, all purple, some pinecones, a dingy
lace doily, a button, a dime,

a necklace (—no, two, or three), and pieces of glass,
a bottlecap, whatever is human, available.
Someone’s slightly curled painting.

I sit next to her bones. The music continues: tassels
and boots, some stomping. Sitting like this

on the ground, under the mutable smell
of locust and desert, I am taller than the small
monument. Also on the altar, a dried thistle, thorny.

Women pace a circle, turn around. The drum releases
its wisdom. Mabel’s in the corner, in the morning,

the evening, forever, the grass shaggy and limp
beside her. Wires cross wires in loops as a fence.
The air is a blanket colored four ways,

then reversed. Now the women are chanting.
Beats lift out of ashes. They’re not very good,

but I like their wide distension
resting on history. Where I am, no one exhales,
and I haven’t said a word, but I believe

she is grateful for a salon again,
for someone to need her. When I rise, the sun flattens

its feathers on ground. On my way out, I notice
double hollyhocks, pink and inevitably alert,
looking both ways, as if responding to many questions.

On the road up, a right, and a right. I followed
“keep out” signs, expecting human clamors

and ripening. Clouds firmly said enter,
persevere! In those days, he was only a man,

and he needed medicine. His skin took in
the clear air. Sentences hardened and were swallowed,

with its aura of needles. His words fell on desert,
minimal, worn. Finger, ink, a furious wind. Nothing spotless.

. . . all these great, dynamic words were half dead now
or maybe more living, landscaped

before the actual dying. The ranch has lapsed
into drought. Such a plain day, unwrapped and refracted. Yellow

sharp-elbowed sun. At the shrine, in the concrete,
how silent the body. In the cool room, inverted

gleaming, unchaste. What in this periphery
is precisely remembered? what is written, repressed?

On the return, I passed through a gesture
of downed cottonwoods and apprised the strange gods

once more. The caretaker latched the gate after me.
Everything folded up, closed. But the road was ready to take me

to the curve of the loins of the mountains, such a vast opening
of light, the view an involuntary demand on the eye

In the upstairs low bedroom
with its odorless space: walls
and cracks asking
back, Tony wrote
plumage. His large hands caused birds
in all corners,
in ridges, dabbed grace
in tangible places. He stood

slow on the overhung
porch in wool blanket where
layers of stars
etched into sky. No
objective. He nodded, patient,
accruing the heaven, its noises. Sky despaired
of color, this land
at the rim of the pueblo

noosed now
by winter. Each night,
he turned again
to feathers and wing, everything
familiar. In the distance, long count
of hills, horse hair,
blood. He looked down
the balcony to tanagers

and magpies mistaking
the dawn. He knew
the cartilage of the house, the heavy
physical body of silence. Tony kept standing
still, kept picturing
birds lift from his large hands
to the rooms, then only the wind
as it slid down the mountain.

The Half Measure to Pleasure and Phrases

The sun moved across the valley all day long, circling the house that was the new center of my life; and fell early, with blinding rays of purple and red.
– Mabel Dodge Luhan (from Edge of Taos Desert: An Escape to Reality)

How I craved a muse that couldn’t escape, that would wake
to the dust-blaze of letters. I invited

compassion and had instead the heavy edges
of friends with their dark reactions. Maybe that’s not right. I had

what I wanted—gardens,
the salted long walls, the invention

of fragments and titles, a buttress,
brocade. As a girl I licked wallpaper

so the flocked roses could touch me. Everyone who came
was a dreamer. I gave each a bed. Night

clenched us, and Lawrence’s strange stories leaked
into the sitting room where they kept me

unending. I preferred the opposite
side of the puritan center. I was ruthless, but breaking—

or broken on the lip of each interaction. I loved the closed
doors, the tables, the margins. I made a room

of each memory. And another, another. Filled with my icons:
our amateur gods—their stories

and verses. Each evening, I climbed stairs
to see Pueblo land penetrate into refraction.

and me. So we married. A life begun in landscape
flecked with ravens. Now each crowd

of tourists gathers under a sky that has stayed
at the windows. They can’t stop talking, waving their hands.

What do they know, scavenging my details?
They can buy all the tomahawks

they please; they’ll still be drifting in my front door.
At night I’ll walk past, shaking my skirts,

one arm in someone else’s. Oh—and one other thing:
Jung didn’t sleep here. Only his dreams.

Lauren Camp—poet, artist, and radio DJ—is the author of two books, most recently The Dailiness, winner of the National Federation of Press Women 2014 Poetry Book Prize and a World Literature Today “Editor’s Pick.” Her third book, One Hundred Hungers, was selected for the Dorset Prize (Tupelo Press, 2016). She began these four poems while she was writer-in-residence at the Mabel Dodge Luhan House in Taos.