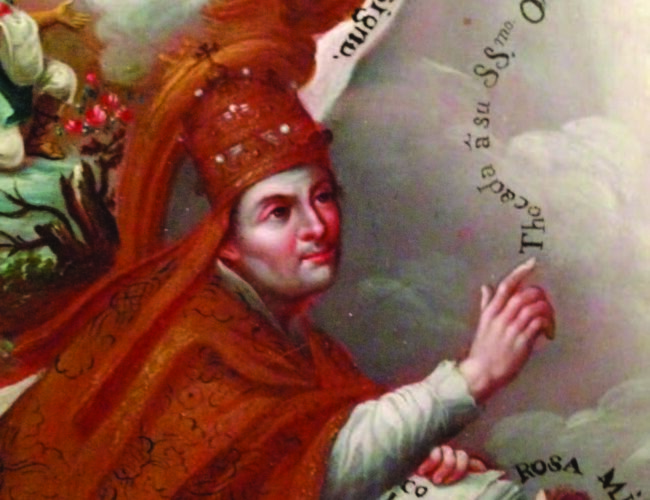 A sense of awe pervades the galleries of the remarkable exhibition Painting the Divine at the New Mexico History Museum as the Queen of Heaven, remote in splendid regalia or transported skyward beyond earthly reach, looks out at you from imposing canvases.

Turning the corner halfway through the exhibition you might almost miss a small painting on a sheet of copper with silver plaques of Rococo cartouches pinned like brooches to its wooden frame.

There she is, the Virgin of Guadalupe, the patron of the Spanish Americas. Although the iconic image is familiar to us in millions of reproductions from tee shirts to shopping bags, this representation is different—intense, poignant, and precious. Surrounded by a fantasia of ornament-framing vignettes of the story is the Virgin as she appeared in 1531 to Juan Diego, a Nahuatl Indian newly converted to the Catholic Church.

To a man who had never seen a queen, here was a demure young woman of dark complexion representing the perfection of purity. This was the image believed to have been miraculously transferred to his garment, since venerated as the tilma. As the centerpiece of this painting, the Virgin seems oblivious to the episodes of her encounters with Juan Diego that flank her, or the three miracles shown above, or the airborne patriarchs and cherubs that proffer crowns. Her gaze is cast downwards towards the figure of Pope Benedict XIV, who in 1754 decreed her to be the patroness of New Spain. Opposite him an Aztec princess, with a feathered crown and an obsidian sword, poses with the heraldic shield of Mexico, as if to acknowledge the news. On the ornamental wave that swells between them is the name of the artist, Sebastian Salcedo, and the date 1779.

Surely this is the masterpiece of Salcedo’s career. The artist did not rank among the leading professionals receiving commissions for major altarpieces in Mexico City but was part of a thriving market for small devotional images made for export as well as local consumption. His skills lay in tender, delicate rendering, not invention. In the case of the Guadalupe copper, he followed a German engraving by Joseph Sebastian Klauber, a printmaker in Augsburg, who, with his brother Johann Baptiste, created compositions on Catholic themes embellished with Rococo ornament. What Salcedo did contribute was the replacement of the text at the bottom of the print with a view of the architectural development of the sanctuary that houses the tilma image, on Tepeyac Hill near Mexico City.

Coded among the miniature inscriptions on the copper, I deciphered a key to the significance of Salcedo’s copper beyond its visible beauty. “Tocada a su SS.ma Original” floats upwards from the Pope’s raised hand. The wording indicates that this was one of the Guadalupe images for which the glass protecting the tilma was removed so that the reproduction could be brought into direct contact with the original, transmitting its special powers. This privilege was rare by the late eighteenth century and may have been granted because the work was destined for a fledgling shrine that would establish the Guadalupe’s following in a distant territory.

The painting is currently in Santa Fe on loan from the Denver Art Museum, but its roots lie deep in the history of New Mexico. With the help of Denver’s curator, Donna Pierce; and the curator of the Museum of Spanish Colonial Art, Robin Gavin, I was able to retrace its path. It would have been shipped from Mexico City on one of the three mule trains that annually made the six-month trip along the Camino Real. It seems likely that it was commissioned by the devout, wealthy Santa Fe merchant José Antonio Ortiz, who was a major benefactor of Santa Fe churches, including the Sanctuary of Guadalupe. The shrine was located where the Camino Real entered the city on the bank of the Santa Fe River, opposite lands owned by Ortiz. Although it received its license from Church authorities in 1795, the structure had been built some years earlier.

The Salcedo painting is recorded in the sanctuary inventory of 1826 and described in detail as “most interesting and curious” in Berger’s Tourist Guide to New Mexico of 1883, when it was located above the entrance to the sacristy. Then comes a gap in its provenance. According to a special in-depth report in the Santa Fe New Mexican (December 5, 1976), the curator of the Denver Art Museum, Robert Stroessner, who purchased the work in 1976, said it came from “a retired doctor who had it in his possession for more than 25 years. He got it from a very old doctor friend who received it as payment for his services to a patient who was a hermano-major (president of the Penitente Brotherhood) in the Taos area during the 1920s.”

The picture came into private hands after the fire that devastated the sanctuary in 1922. It was an astonished art historian, Gabrielle Palmer, spearheading the most recent restoration of the church, who recognized the newly acquired Salcedo in the office of the Denver curator and arranged its loan for the reopening of the Santa Fe sanctuary in 1976.

On this, its second return to Santa Fe, the exquisite painting that touched the tilma brings with it again the intense power of the faith that united the vice-regal mother city in Mexico with its far-away outpost on the Camino Real.

Painting the Divine is at the New Mexico History Museum through March 13, 2016.