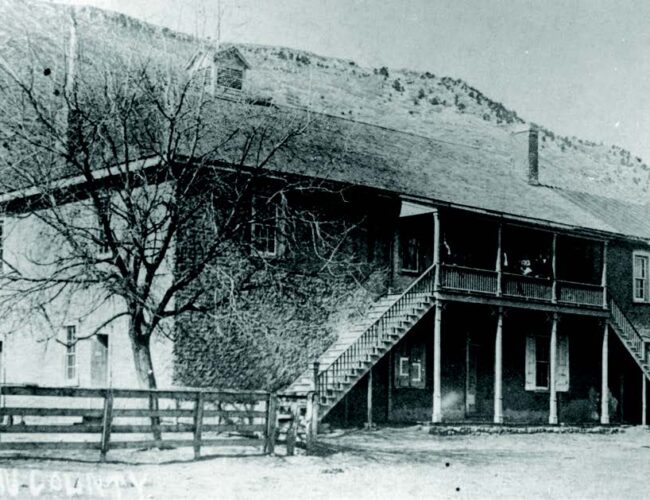 When you walk through the streets of Lincoln, New Mexico, you see the culmination of everything that has happened since the town was first established: the Torreón, a round, rock tower built for defense in the 1850s by the first Hispanic settlers; the Old Lincoln County Courthouse; and all the public and private buildings and residences that line the street.

Despite all of the modern conveniences available to visitors and residents in Lincoln—paved roads, electricity, airconditioning, (slow) internet, and, most importantly, indoor plumbing—it is known as the best-preserved pioneer town in America. People often remark that being there is like going back in time to the Wild West of the 1880s.

Not everything has to be an architectural masterpiece to be worthy of preservation. Every building in Lincoln tells a story, both its own individual story and the collective story of the town. Ultimately, preservation is about people, and the historical significance of many of the most important landmarks is created by those who encounter them after they are built. Each change of use, adaptation, and addition that has occurred in Lincoln over the past century and a half contributes to those individual and collective histories.

A lot of people think that historic preservation prevents change, that it is all about keeping things exactly the same, frozen in time, but this really is not the case. Despite that reputation, it is a field that is constantly changing, adapting, and modernizing with the times. Most essentially, historic preservation is about telling the stories of people who brought about such change. The strategies, methods, and laws that preservationists use are merely tools for protecting our heritage as a community, whether it’s a small community like Lincoln, a large community like Santa Fe, or a heritage that is shared by everyone who travels to historic sites. Preserving significant buildings, archaeological sites, neighborhoods, and downtowns is a way for us to connect the past to the present, make it relevant, and enable communities, special places, and their stories to endure over time. Change is going to happen over time regardless of what we do to implement or prevent it, and the job of preservationists is to manage that change.

Who knows what would have happened to Lincoln if the infamous events of the Lincoln County War had never taken place? The Old Lincoln County Courthouse, the most iconic building in Lincoln—famous for its role in the Lincoln County War as the former Murphy-Dolan Store, for the iconic (and apocryphal) “bullet hole in the stairwell,” and as the site of Billy the Kid’s famous escape—demonstrates how people and their stories, as much as or more than the buildings themselves, are the reason we preserve our special places.

The courthouse is an excellent example of the ways in which the principles and practices of historic preservation continue to evolve and how that process encourages us to look back in time while looking forward to the future. Originally built in 1873–74 as the Murphy-Dolan Store, the building was also called the Big House. When the store went bankrupt, it was purchased by Lincoln County on December 15, 1880, for $15,000, to be used as the county courthouse.

In 1881 the front, exterior stairs of the building were built on the east side to give access to the new courthouse upstairs. Until then the only access had been from inside, through a maze of offices and living quarters. In 1882, after the famous escape of Billy the Kid, a jail was added behind the building. The structure’s adobe bricks were exposed until 1891, when the building was plastered for the first time. In 1901 a front porch and stairs to the west side of the upstairs balcony were added, completing the appearance that it maintains today.

The courthouse was converted into a high school after the county seat moved to Carrizozo in 1913. The Lincoln County Society of Art, History, and Archaeology was founded in 1937 by a group of citizens—preservationists before preservation was cool. To preserve Lincoln, they helped get the building deeded to the state.

Beginning in 1938, the Museum of New Mexico restored the building with funding from the Works Progress Administration, intending to restore it to its appearance in 1881, when it was the Lincoln County Courthouse, and when Billy the Kid made his escape—a preservation method called restoration. In the restoration plans, the supervisor said, “Our plan was to restore the Lincoln County Courthouse, for use as a museum and as an architectural monument, and to preserve as much of the original structure as possible. With this idea in mind the entire program was carried out. Even the old cut nails that were not broken were used again in places where the strain was not too great. Most of the old wood trim was preserved, though some had to be duplicated” (Thomas J. Caperton, Historic Structure Report: Lincoln State Monument, Lincoln, New Mexico, 1983).

During the restoration, a vent and cupola that had been installed in 1901 were removed from the roof. The cupola, supported by the roof structure, weighed so much that it was pushing the rafters outward. A corrugated-metal roof, installed in the 1920s, was replaced with wood shingles to match the original roofing material. By 1936 the east wall had started to weaken and crack under a chimney that had been built by the county. “Since that time,” wrote J. W. Hendron in 1939, “the Lincoln County Courthouse has been a good place to keep away from.” Workers propped up the roof, and the entire wall was removed and rebuilt.

To strengthen the foundation and prevent it from sinking or spreading outward, foundation pins made of concrete and rock were set every 5 feet around the building. All of the rock used for underpinning the foundation was quarried from Spring Canyon, two miles northwest of Lincoln. Trenches 2 feet wide, 3 feet long, and 6 to 8 inches below the foundation were dug, and 12 inches of undercutting were filled with native stone and concrete. The trenches were filled in the same manner, sloped down at the sides and far end, and finished with cement mortar. This construction is still visible on the west side of the courthouse.

The restoration also entailed replacing the shutters on all the windows, and the porch and side stairways were restored to match the originals from 1891 and 1901. Many of the doors and windows had to be reconstructed because they were in such poor shape, but as much original material as possible was reused. Where necessary, the walls were reconstructed with asphalt-stabilized adobe bricks, which are more resistant to water and the elements than traditional adobes.

So what happened to the jail? The 1889 jail and other outbuildings constructed after 1881, which did not relate to Billy the Kid and the Lincoln County War, were removed to reflect the designated period of significance. When Billy the Kid enthusiasts look for the “jail” in Lincoln, they are directed to the upstairs area of the courthouse, where Billy was imprisoned in an office, not the jail that was built later. The courthouse was dedicated by Governor John E. Miles in 1939 and opened to the public as the first New Mexico state monument in 1940. In 1949 jurisdiction of the building was transferred to the Old Lincoln County Memorial Commission, which operated the monument for the next twenty-eight years. Between then and 1977, minimal work was done to the building beyond replacing the wood shingles and stucco. In 1977 the courthouse and other properties that had been acquired from the Memorial Commission were returned to the Museum of New Mexico. After the museum resumed responsibility for the operation of the monument, State Monuments began to document the buildings and plan for their repair and rehabilitation. The last time any major restoration work had been done was in 1939, and by the late 1970s, many of the buildings, which had not been well maintained, needed major repairs. In 1983 past work and the current condition of the Lincoln State Monument buildings were documented in Thomas Caperton’s Historic Structure Report (Caperton was the director of New Mexico Monuments at the time). By the 1980s, most of the stucco coat had broken away in large pieces, and the subcoat was exposed in places all over the building. The building needed a new roof, and the front porch, stairs, and balcony were in poor condition.

As of this writing, the stairs, porch, and windows of the courthouse have been rehabilitated and replaced in kind where necessary. Unlike the restoration work performed in the 1930s, now the focus is on preservation, in which maintaining and repairing existing historic materials is the main goal—an attempt to retain the property’s form as it has evolved over time—and on rehabilitation, which acknowledges the need to repair and maybe replace historic features, but in a way that retains the character and integrity of the building by using in-kind materials. Despite all the change, current and future preservation projects in Lincoln will preserve the intent, integrity, and historic character of the building.

From the restoration in the 1930s to the preservation and rehabilitation goals of today, the courthouse embodies 140 years of change. That change entails not only the story of the Lincoln County War and Billy the Kid, but also the evolving philosophy and techniques of preservation, along with the story of a living community with all the modern conveniences you would expect in the twenty-first century.