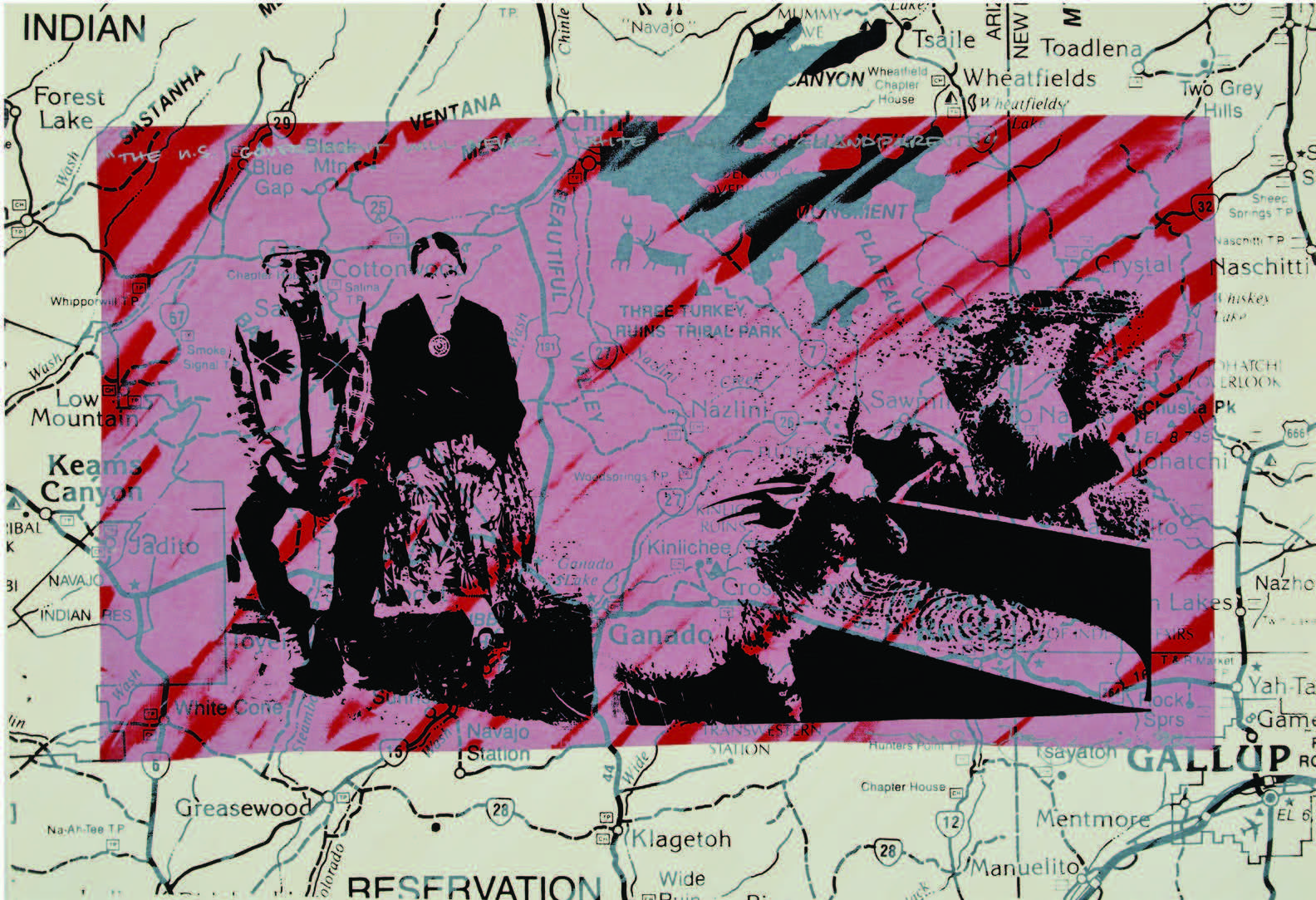 In the collection of the New Mexico Museum of Art, a group portrait by Fritz Scholder, based on a ca. 1966 photograph, depicts early faculty members who helped shape the curriculum, mission, and direction of the newly established Institute of American Indian Arts in Santa Fe.

Among them is Lloyd Kiva New, IAIA’s first art director, who devoted himself to the goal of empowering individual students to reach their full potential as artists and as people. He believed this could be achieved through a connection to traditional tribal art and culture to create a personal artistic expression and did not want his students to feel stifled by pressures to create a certain type of officially sanctioned Indian art.

Santa Fe has long been a tourist center. From the 1880s on, trains and, later, automobiles encouraged an influx of visitors. Local Pueblo and Plains Indian artists developed a variety of pottery, textiles, jewelry, and other objects to meet the market demand and the tastes of non-Native buyers. In the 1930s, Dorothy Dunn taught students at the Santa Fe Indian School to incorporate tribal imagery into a new style of painting. The flattened style was intended to eschew European influences while presenting an “authentic” Indian art, even though the paintings were not part of a tribal tradition. Both of these precedents established a market for Native American art intended for non-indigenous buyers attracted by the forms and motifs of traditional tribal design and culture. The insistence that students adhere to particular styles was an idea that Lloyd Kiva New and the newly formed IAIA rejected.

The founding of IAIA intersected with a significant moment in the history of Western art. Ethnicity and culture, political ideology, feminism, and the inclusion of personal narratives became legitimate forms of expression in mainstream contemporary art. The early years of IAIA were also an era of consciousness raising and civil rights movements in the United States. Native American self-determination was a major issue for many indigenous artists. Artists such as Scholder and his student T. C. Cannon addressed Indian stereotypes in works that fit with then-current abstract expressionism and pop art. Others, such as Neil Parsons, explored more abstract styles that retained referents to tribal culture and identity.

Artists teaching and studying at IAIA faced opposing forces in a wider contemporary debate regarding the degree to which Native Americans and their artistic creations should assimilate or resist assimilation into mainstream American society. While there was an established market for traditional Native American art, indigenous artists who engaged with contemporary art movements were taking a leap of faith to pursue art without the same, established market of tourist-art buyers and more serious collectors.

New encouraged students to look at new art techniques and forms as a path to creating contemporary Indian art. He envisioned IAIA artists engaging in a dialog between two cultures—their indigenous heritages and the non indigenous contemporary mainstream—and asserted that Native artists had a contribution to make to the field of contemporary art. In 1968, in an article titled, “Using Cultural Difference as a Basis for Creative Expression,” he wrote, “Given the opportunity to draw on his own tradition, the Indian artist evolves art forms which are new to the cultural scene, thereby contributing uniquely to the society [in] general.” In the exhibition Finding a Contemporary Voice, artwork by former and present IAIA faculty and students demonstrates the contribution these artists have made to the larger field of contemporary art.

Enough time has passed that the early days of IAIA, looking back half a century now, can be historicized and examined in greater context. Younger artists continue to use art as a vehicle for interrogating issues of Native American identity. Melanie Yazzie presents postcolonial women’s issues. Will Wilson in his photographs and Hulleah Tsinhnahjinnie, utilizing historical and family photographs, explore the complexities of identity in being both Native and American. Looking at the issues of identity still being raised in contemporary Native American art, it is clear that the artwork of the 1960s and 1970s began a conversation that continues to this day.

Finding a Contemporary Voice: The Legacy of Lloyd Kiva New and IAIA runs from May 20 to October 10, 2016, at the New Mexico Museum of Art.

Carmen Vendelin is curator of art at the New Mexico Museum of Art. She organized Colors of the Southwest and O’Keeffe In Process in 2015 and is curating Stage, Setting, Mood: Theatricality in the Visual Arts, on view February 6 through May 1, 2016, as a complement to the traveling exhibition First Folio! The Book That Gave Us Shakespeare. She is the curator of Finding a Contemporary Voice.