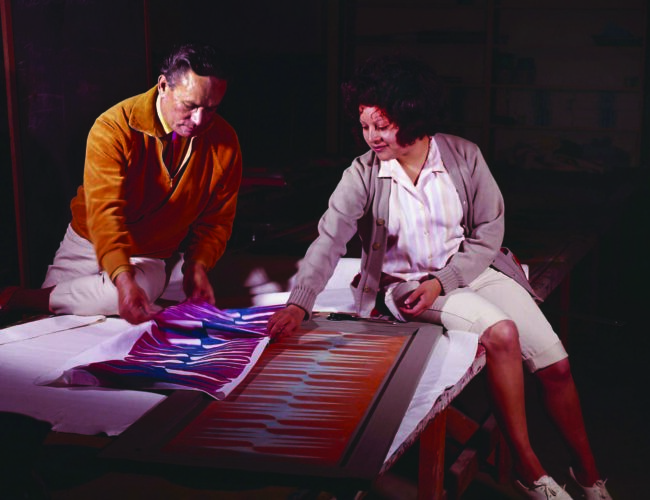 Lloyd Kiva New: Art, Design, and Influence, at the Institute of American Indian Arts (IAIA) Museum of Contemporary Native Arts (MoCNA), celebrates the work of the famed Cherokee artist, designer, and educator, who is still discussed and admired for his modern and innovative foresight and artistry one hundred years after his birth.

The exhibition demonstrates how New was able to create and build upon innovative concepts in Native art and culturally based education and investigates the impact he had on his Native students. New believed that the arts were a means of bringing about cultural change, offering Native students a vehicle of expression and a connection to culture not found in other parts of a school curriculum.

While extravagant handbags, dresses, and modern design remain New’s calling cards, he also produced a lesser-known collection of two-dimensional works. More than thirty such works in the exhibition, completed between 1938 and 1995, are expressions of his personal creativity and connections to his Native heritage. The earliest works include sketches and watercolor paintings created during World War II, when New served in the US Navy. Many of the works come from New’s personal collection, on loan from Mrs. Aysen New, and have never been shown in a museum or gallery; they are accompanied by works from the MoCNA permanent collection.

New recognized the modern aesthetics of Native designs and applied them to high-end fashion. In 1946 he trademarked his business name, Lloyd Kiva, a brand still recognized today. His fashion showrooms, based in Scottsdale, Arizona, allowed his clientele to select the material and styles for custom couture. An interpretive reproduction of the Kiva Studio showroom (1955–61) in the exhibition illustrates his introduction of Native modernism into fashion and textile design. Original “Kiva handbags” (named by New and extremely popular among his clients), garments, material swatches, ephemera, and adornments are displayed in the showroom setting that appealed to Lloyd Kiva’s clientele. Many of the pieces are on loan from private collectors and public institutions.

During the mid-1950s New was called upon for his guidance and expertise in educating Native students in arts and crafts. This led to his involvement in the formation of a Native arts program, which developed into the Institute of American Indian Arts in Santa Fe. IAIA opened in October 1962, and New provided the artistic direction that laid the foundation of its curriculum.

From 1962 to the early 1970s, he also taught textile design. The exhibition features more than thirty printed textiles created by IAIA students, drawn from the MoCNA permanent collection. Many of the textiles that New’s students created during the 1960s and 1970s have been photographed and digitized, and visitors can explore those images with an interactive touch screen; they also have the opportunity to create their own textile designs using motifs and colors taken from the original textiles.

Lloyd Kiva New: Art, Design, and Influence is open to the public from January 22 through July 31, 2016, in the Anne and Loren Kieve Gallery and the Fritz Scholder Gallery; and in the North Gallery through September 11, 2016.

Tatiana Lomahaftewa-Singer is the curator of collections at the IAIA Museum of Contemporary Native Arts.