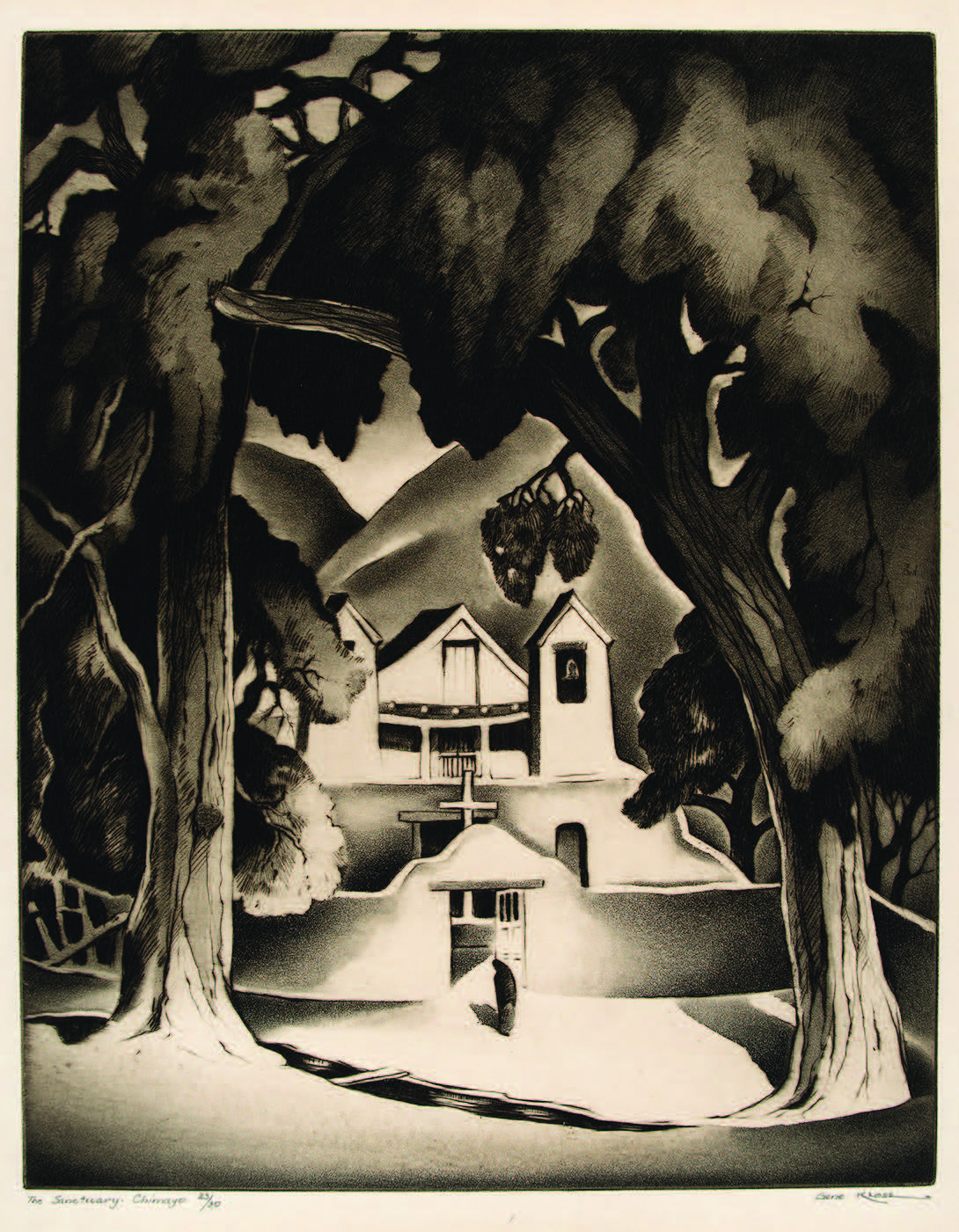 Gene Kloss, The Sanctuary, Chimayo, 1934. Aquatint and drypoint, 13 15⁄16 × 11 in. On long-term loan to the New Mexico Museum of Art from the Fine Arts Program, Public Buildings Service, US General Services Administration (2945.23G).

Theatricality draws out emotions in the observer. In the performing arts, “stage, setting, and mood”— the use of backdrops, props, lighting, and sound, and the application of the performers’ craft in the physical space of the theater — work together to evoke sensations and sentiments in the audience. In the visual arts, artists employ theatrical, pictorial means to appeal to the senses. Colors, bold forms, and compelling subjects can be called on to elicit an emotional connection between viewer and artwork.

Like performers, visual artists create other worlds in their chosen media. When artists depict actors, musicians, and dancers, they often do so with visual language to create a sense of drama, using techniques such as strong highlighting and shadow, and by positioning subjects to show narrative interactions. Trude Fleischmann in her photograph Portrait of Toni Birkmeyer (1935), for example, utilizes dark shadows and highlights to bring out the expressive qualities of the dancer and choreographer’s face. In the exhibition Stage, Setting, Mood: Theatricality in the Visual Arts, artworks that feature high drama, theatrical presentation, and narrative storytelling demonstrate the connection between sensation and spectacle.

The title-wall painting in the exhibition, William Penhallow Henderson’s Holy Week in New Mexico (also known as Penitente Procession, 1919), is highly theatrical. The brothers of the Hispano Penitente Brotherhood have a 400 year history in New Mexico and trace their roots back to religious orders in Spain and Italy. Henderson depicts a reenactment of what is for the Penitente a highly charged, highly emotional scene of Christ’s suffering with vibrant color and jagged diagonal shapes that lead the eye through the composition. The drama of the scene works on several levels. It is a passion play, offering theatricality in a religious context. The practice of self-flagellation may seem shocking to some viewers, heightening the sensationalism. Further, Henderson’s use of color, crowding of forms, and employment of an upward diagonal compositional arrangement increase the sense of energy and tension. The artist is able to intensify the drama of the scene by artistic means.

In the visual arts, the style most associated with theatricality is seventeenth-century European baroque art. In baroque painting, the theatricality of a composition was often made literal with the inclusion of a curtain framing the scene, sometimes shown being pulled back by one of the figures. Italian baroque sculptor Gian Lorenzo Bernini’s marble sculptural installation Ecstasy of Saint Teresa (1647 – 52), in Cornaro Chapel, Santa Maria della Vittoria, Rome, goes so far as to include spectators in settings that approximate theater boxes on either side, perpendicular to and witnessing the central action. Baroque art is characteristically dynamic, with undulating forms, diagonal lines, and off-center points of interest that draw the eye on a journey through the compositional arrangement. Bold primary colors and dramatic extremes of dark and light further emphasize spatial relationships and three-dimensional form, adding to the sense of cinematic, stopped motion. All of these elements work to create visceral excitement and emotional response in the viewer.

Visual artists also show sympathetic harmony in matching setting to mood and imbuing animal subjects with pathos and humanity, as exemplified by many of the artworks in the exhibition. Lloyd Moylan’s title The Breadwinner (1935 – 39), forinstance, humanizes the hen and rooster protagonists of his lithograph and implies a narrative. Interactions between figures infer a narrative storyline. Extreme contrasts of dark and light help to convey intensity, as in Gene Kloss’s The Sanctuary, Chimayo (1934). Artists can also arrange landscape and architectural features as if the location were a stage. The artworks in Stage, Setting, Mood date from the late eighteenth century to the present and employ some of the same elements and later developments.

Drawn primarily from the New Mexico Museum of Art’s collection, many artworks in the exhibition are recognizably southwestern in theme and demonstrate the theatricality of the mythos of the West and the characteristic New Mexico color and light. The idea of the Wild West is rooted in a nostalgic, mythologized vision of the pre-statehood western United States. Subjects including cowboys, indigenous people, and Hispano Catholicism facilitate feelings of heroism, imagined authenticity, purity, and loss for the viewer.

New Mexico scenery has been described as “dramatic, almost theatrical” (Sharyn Rohlfsen Udall, Modernist Painting in New Mexico, 1913 – 1935). Artists have been drawn not only to Hispano and indigenous cultures as subjects, but also to the landscape and adobe architecture. Flat planes of adobe structures can impart a diorama or stagelike quality to the arrangement of flat, twodimensional surfaces in three-dimensional space.

The townscapes and landscapes selected for this exhibition demonstrate a theatrical approach to nonperformance subjects, employing stagelike arrangements of landscape and architectural features, dramatic lighting to intensify mood, and narrative interaction. For example, the flat planes of James Stovall Morris’s structures in the paintings Velorio (undated) and Lightning (1940) set up a diorama-like space and present buildings as backdrops for the human drama staged before them: a wake in Velorio and people out in a storm in Lightning. In other compositions, the drama of the natural landscape is heightened with bold colors and contrasts between light and shadow, as in the painting The Black Shawl (1933), by Esquípula Romero de Romero, which helps to accentuate the piety of the young woman looking up at a cross.

The exhibition is arranged by subject. “Theatrical Tableaux” shows the ways that artists can create setting and stage. “Tempests and Tensions” features depictions of performers and stagecraft. “Sympatico Spectacles” showcases the landscape and other nonhuman protagonists. “To Be or Not to Be” includes artwork employing the skull as a device for reflecting on both mortality and judgments of morality.

Carmen Vendelin is curator of art at the New Mexico Museum of Art. She organized O’Keeffe In Process and is curating Stage, Setting, Mood: Theatricality in the Visual Arts, which will be on view through May 1, 2016, as a complement to the traveling exhibition First Folio! The Book That Gave Us Shakespeare.