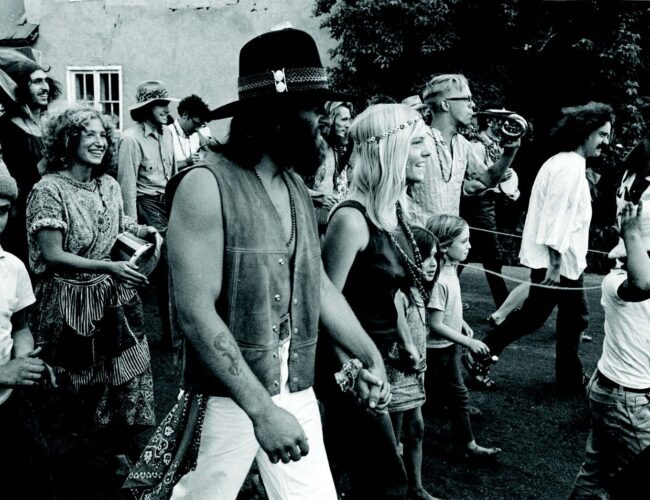 The image shows Alan Gee (far left, wearing a white shirt and cap) and members of the Hog Farm, including Don Gallard (in jester hat), Paul Fleming (in white shirt and mustache), Wavy Gravy (in front of Fleming), and Red Dog (just visible between the man in a black hat and the blonde woman), in El Rito, New Mexico (HP.2013.26.7).

Arriving on New Mexico’s counterculture scene in the mid- 1960s, Irwin Klein used his camera to tell stories. To look at his photographs today is to feel your shirt sticking to your back from fieldwork, to smell the smoke from cooking fires, and to look into the eyes of someone who shared your philosophy of life and perhaps your communal bed.

These are more than simple snapshots of the countercultural scene. With the eye of a true ethnographer, Klein offers insight into the world of what he called “new settlers,” recording their daily lives and celebrations as they occurred. The result is a departure from the carnival-like atmosphere that pervades much of the photography from the 1960s and 1970s.

We often look at the sixties through rose-colored glasses, but life in northern New Mexico was difficult, especially for those who fled the cities and suburbs. Hunger, drug addiction, unwanted pregnancies, differences in philosophy, and a lack of money dogged the new settlers. Klein pulls no punches in his images of northern New Mexico. As a result, his photos are a valuable resource for historians and others interested in understanding the complexities and contradictions of the countercultural scene. Klein’s portraits of the new settlers are reminiscent of Ben Wittick’s photographs of the 1880s–90s, when the West was still young and new settlers were numerous.

Irwin Klein’s work underscores the importance of acquiring, preserving, and creating access to photographic material for the public. Klein created a marvelous and invaluable record of a cultural phenomenon that resonates with historians, those who lived through the period or were touched by it, and young people today who look back to the counterculture with a sense of awe. Historians, archivists, and others who lament the disappearance of Klein’s negatives after his death in 1974 may find comfort in knowing that in 2013, the Photo Archives was fortunate to purchase twenty vintage prints from the estate, made by Klein between 1967 and 1971.

Irwin Klein and the New Settlers: Photographs of Counterculture in New Mexico, edited by his nephew Benjamin Klein, was released in 2016 by Bison Books at the University of Nebraska Press.