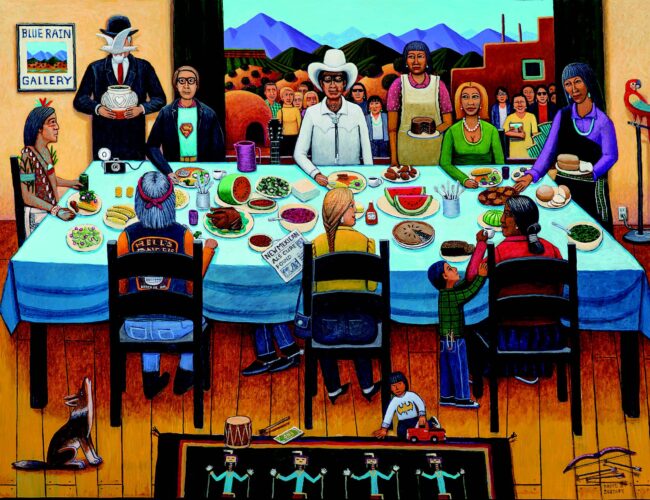 This year’s Governor’s Awards for Excellence in the Arts honors David Bradley, whose Indian Country exhibition recently graced the Museum of Indian Arts and Culture.

There are three stages of looking at a David Bradley painting. First, you see the vibrant color and detailed images of a New Mexico scene. Often, it’s a familiar one, such as people gathered around the dining room table of an adobe house in Pueblo Feast Day. Looking more closely, you take in the humor and creative juxtaposition. Here, guests include the Lone Ranger (sitting next to Clark Kent) and, across the table, a biker in a Hell’s Angels vest. A bowler-hatted René Magritte stands in the corner, next to a poster that says blue rain gallery, which represents Bradley’s work. Is that Bradley’s wife, Jemez Pueblo potter Arlene Loretto, wearing traditional Pueblo dress and serving bread? Looking more closely still, you feel the sucker punch, the undeniable, uncomfortable truth. Sometimes it’s funny, sometimes not. In Pueblo Feast Day, a crowd of what looks like uninvited guests gawks through the picture window behind the table, reflecting that with the commodification of Native culture, even the simplest tradition has become a spectacle—something continuously overshadowed by the gaze of those on the outside, looking in.

The headline of a newspaper resting on the dinner table reads, ALS cure found. It’s not a coincidence. Bradley was diagnosed with ALS, also known as Lou Gehrig’s disease, three years ago.

“I could write a book about what it is like to be told you have a short time to live and that you will slowly become paralyzed before you die,” Bradley related via email, because the disease has progressed to the point that it is arduous for him to speak, impossible to sculpt, and difficult to paint. “More recently I have been experimenting with pouring paint with no brushes or other tools to control it. This way of working really frees you up and is very satisfying.” At the same time, he said, “As my illness has progressed, even pouring paint becomes very difficult.”

A member of the Minnesota Chippewa Tribe, Bradley grew up in California, did a stint with the Peace Corps in the Dominican Republic and Haiti, then arrived in Santa Fe in the late 1970s to attend the Institute of American Indian Arts. The city has been his home ever since.

“Santa Fe had a special magic for me in those days,” he said. “Part of what kept me here was the Santa Fe Indian Market, the whole incredible art scene, and the fact that I could hang out with hundreds of other Indians and artists, most of whom were affiliated with IAIA at one time or another. And of course, there were thousands of Pueblo Indians living within an hour of Santa Fe. Many of them were famous jewelers or potters like Maria Martinez. Besides immediately falling in love with Santa Fe, the beautiful, dramatic landscapes of northern New Mexico blew my mind. They still do.”

While much Native art is about preserving tradition, Bradley’s incorporates many cross-cultural influences while remaining distinctively Native in subject matter. The artist says that during his Peace Corps years, he was greatly inspired by the color and expressiveness of Haitian folk art, which kindled his love of folk art across cultures.

“After I became a student, one of my favorite classes was art history, especially the topics of the folk artists of Europe, like Henri Rousseau, but also the folk arts of Native peoples from around the world,” he recalls. “Picasso also spent much of his career creating works influenced by African folk art.”

2016 Governor’s Awards For Excellence In The Arts

Recognized for: Reinterpreting traditional bultos and retablos to depict saints (and sinners) in ways that are edgy, satirical, and socially conscious

Recognized for: Being the glassblower, mentor, educator, and businesswoman behind Liquid Light Glass, and one of the founders of the Baca Street Arts District.

Recognized for: Carving bultos that radiate spirituality and are found in places of worship across New Mexico and around the world.

Jim Vogel (Artist, Dixon)
Recognized for: Illustrating New Mexico folklore, myth, and magic in his epic paintings; and donating 100 giclée editions of La Resurrección to raise money for Albuquerque’s National Institute of Flamenco when they lost their facility in a tragic fire.

Michael Hurd (Major Contributor to the Arts, San Patricio)
Recognized for: His delicately rendered New Mexico landscape paintings; sustaining and sharing the rich tradition of four generations of the Wyeth-Hurd family; and his efforts to save “The Future Belongs to Those Who Prepare for It,” a 64,000-pound plaster mural by his father, Peter Hurd, from demolition and relocate it from Houston to the Artesia Public Library

New Mexico Magazine (Major Contributor to the Arts, Santa Fe)
Recognized for: Building the local economy by enticing visitors to enjoy New Mexico’s artistic and cultural attractions for the past ninety-three years.