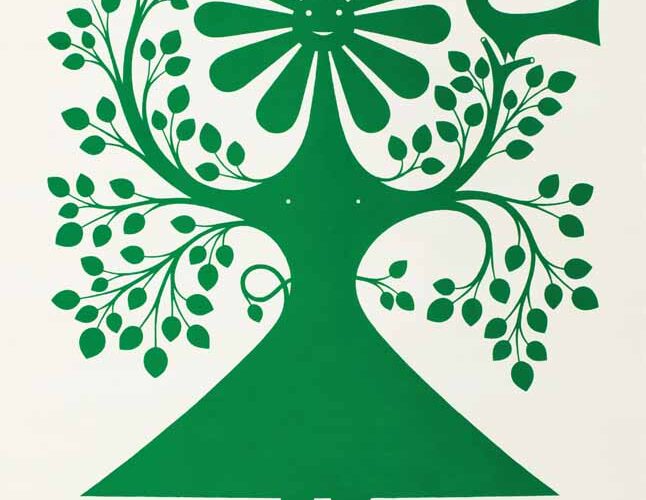 The name of Alexander Girard’s permanent installation at the Museum of International Folk Art is Multiple Visions. As we put the finishing touches on the fourth summer issue of El Palacio I’ve had the privilege to wrangle, Multiple Visions strikes me as an apt phrase for what goes into publishing this magazine. Writers, editors, designers, photographers, museum curators, and the publisher contribute multiple visions for stories that must meld into a finished product. Alexander Girard’s vision for the permanent exhibition was singular and subjective, but each maker of any of the 10,000 objects created from an individual vision, too—one also formed by their cultural traditions.

Girard’s vision was also formed by his own cultural context. Multiple Visions may once have been regarded as the masterwork of a particular sensibility, a gathering of curious and exotic objects by a discerning designer. As Stacey D’Erasmo writes in “My Year of Writing Anonymously” (Lit Hub), “Of course, what gleams to anyone’s eye is composed of all the forces and conditions that have gone into the composition of that person….Sensibility is informed by what the world has made of you and your own relationship—obedient, belligerent, anxious, etc.—to that making.” Curator Laura Addison shared that Girard had a room in his Santa Fe home devoted to his paper collection, and that he emptied it while furnishing the many sets of Multiple Visions. I also have a paper collection, which commenced with pieces I bought as an undergraduate in Buffalo, and I hang on to them—maintaining a fantasy that one day each piece will meet with a fitting function. It hasn’t helped that letter-writing has become an arcane practice, executed with a certain involuntary whimsy, like peering through a lorgnette at the opera, or securing a hat to one’s head with a pin. Reading “When Georgia Met Sandro”, about the friendship between Alexander Girard and Georgia O’Keeffe, inspired me anew to write letters to my loved ones that require paper, pen, and a stamp—and with a new return address.

This fall, I’ll be embarking on a creative writing PhD program in the verdant college town of Athens, Ohio. Because my family and I are moving there in July, at least 10,000 deliberations await me. What to pack, what to sell, what to donate, what to give as a gift?

It’s been a transformative experience to helm this august magazine for three years. The dear thing about working for an iconic institution is knowing I’m one link in a long chain that extends into the past and future. I’m leaving Santa Fe, but don’t have to leave El Palacio; it will land in my mailbox quarterly—a mailbox, if everything goes according to plan, anchored to the earth amid many undulating, loden-green acres of farmland.

Publisher Shelley Thompson told me, when I was hired, that I’d gain the equivalent of a master’s degree’s worth of knowledge, simply by doing an attentive, thorough job here. I concur. I’ve learned lessons about buried fossils, aerial photography, and many strata in between. El Pal’s readers have taught me plenty, too, whether you’ve shared personal anecdotes that bring a historical story or place to life, or brought a squirm-inducing error to my attention. This feast of learning might even be partly at fault for my decision to make learning the explicit focus of the next half-decade of my life. It’s satisfying to know that readers have been deepening their understanding, too, and soon, I’ll be on the other side, in very good company: one of you. I can’t wait to find my first squirm-inducing error. Just kidding. Sort of.

As O’Keeffe once closed a letter to the Girards,

My Best to All of You Always.